FUMING mums have told how Primark's sought after Harry Potteradvent calendar is being sold for up to £150 on Facebook MarketPlace and eBay – the same week it was released.

Earlier this month we reported how fans were going wild for the Hogwarts-shaped advent calendar. 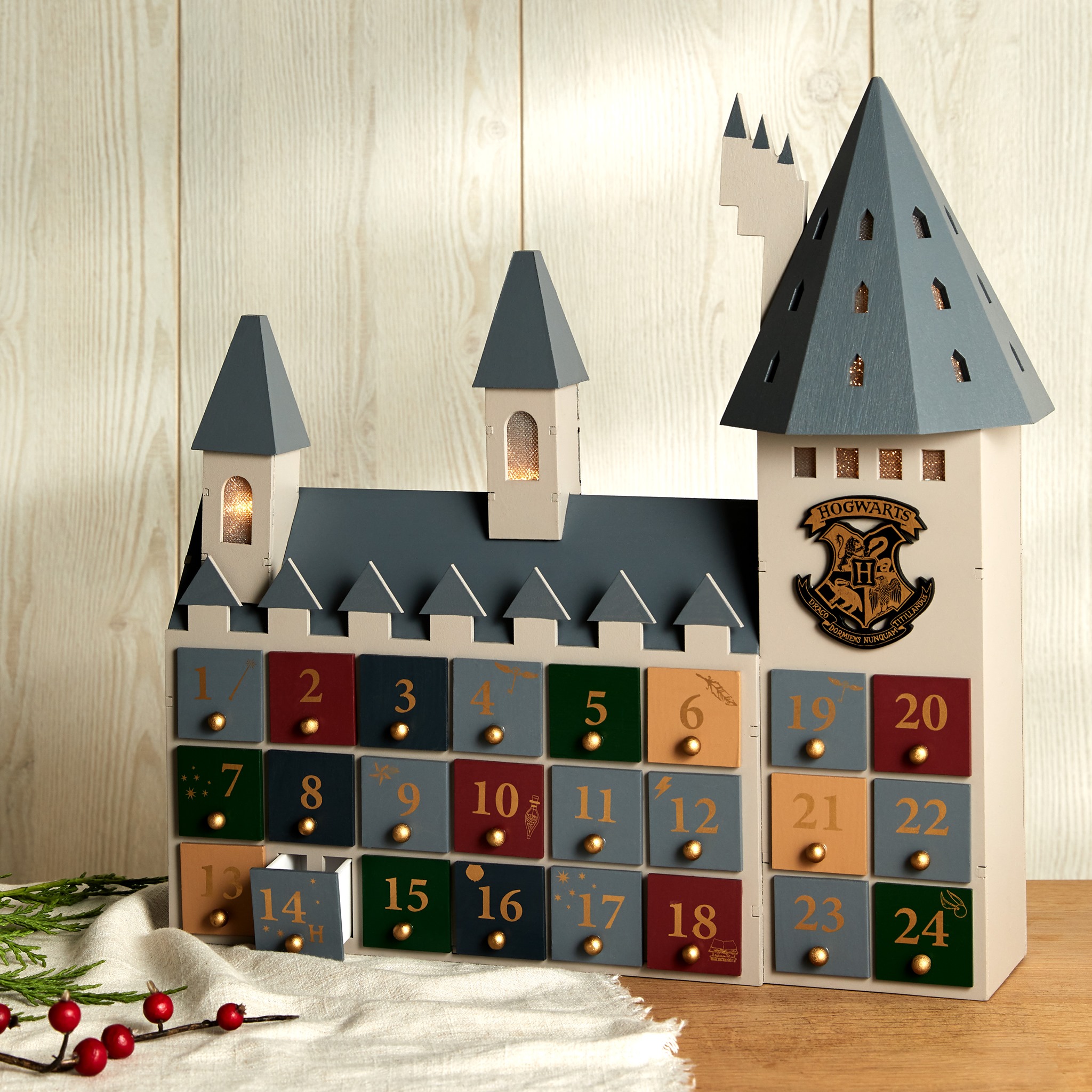 The department storeshared a first look at their magical must-have shaped like the infamous castle, after bringing out a Hogwarts Express-themed calendar last year.

The castle cost just £16, and as it’s made out of wood you can use it every year, with Primark saying the calendar is perfect for creating a “new tradition”.

The design features multi-coloured numbered boxes, along with the Hogwarts’ crest on the tower – and the drawers are empty so you can fill it with your favourite sweets, treats or even booze.

But now people who've managed to snare one of the sell out calanders are flogging them for up to £150 – more than NINE times as much. 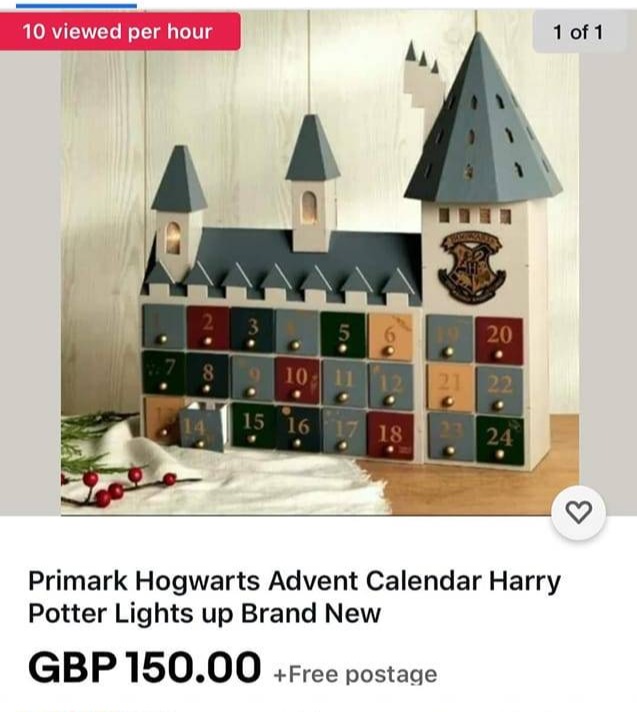 Writing on the Primark Haul Facebook page, one woman wrote: "Does anyone else get very angry when you see stuff like this it's only £16 in Primark and only came out this week and already out of stock in some stores and then this is eBay."

Another said: "Just wrong and it's pure greed."

Someone said: My daughter desperately wants one and I wouldn't pay that."

Another added: "I'm a HUGE fan of Harry Potter and even I wouldn't of these."

Alarmingly, some of the inflated prices aren't just 'buy it now' prices but actual bids. 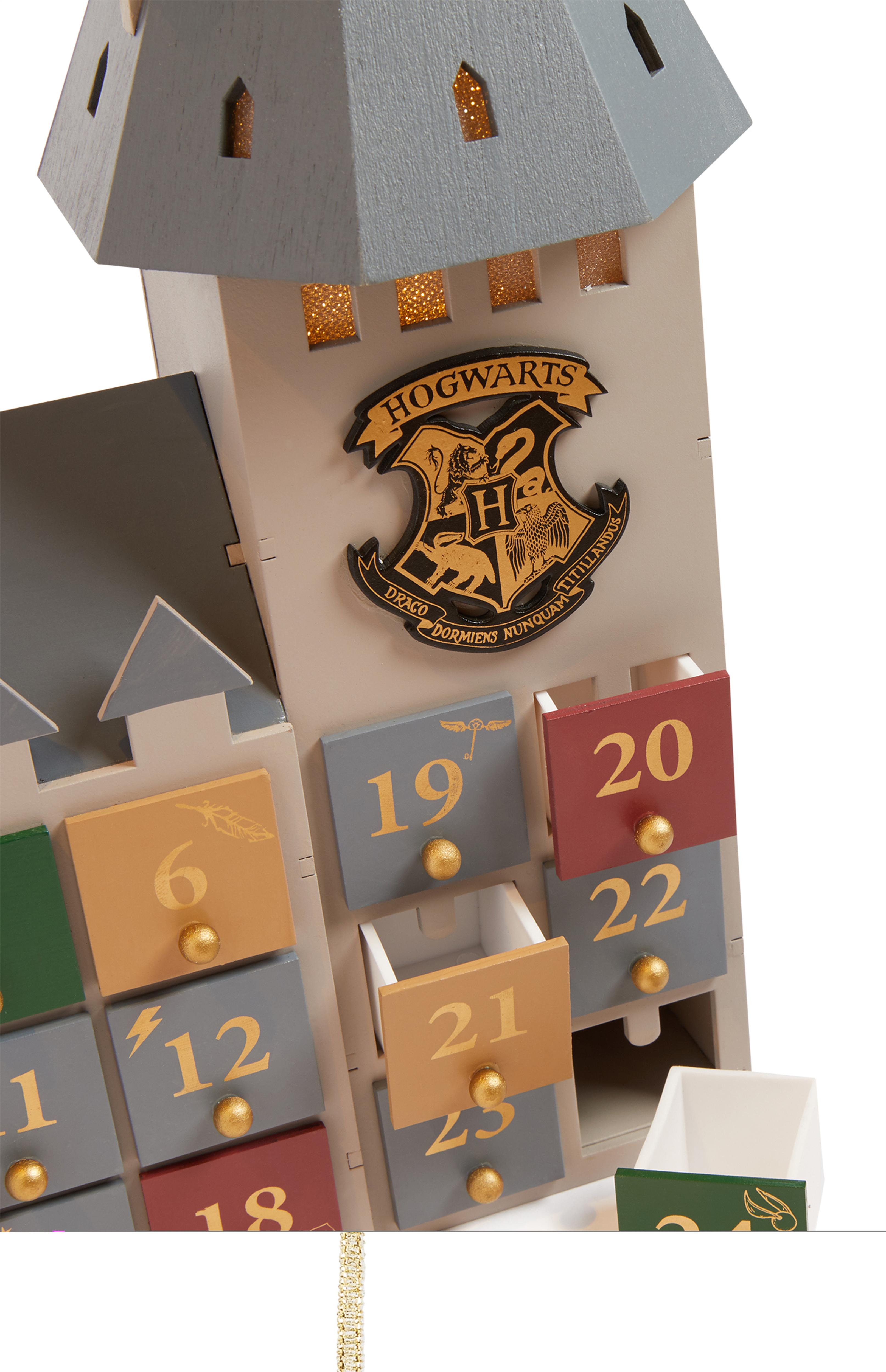 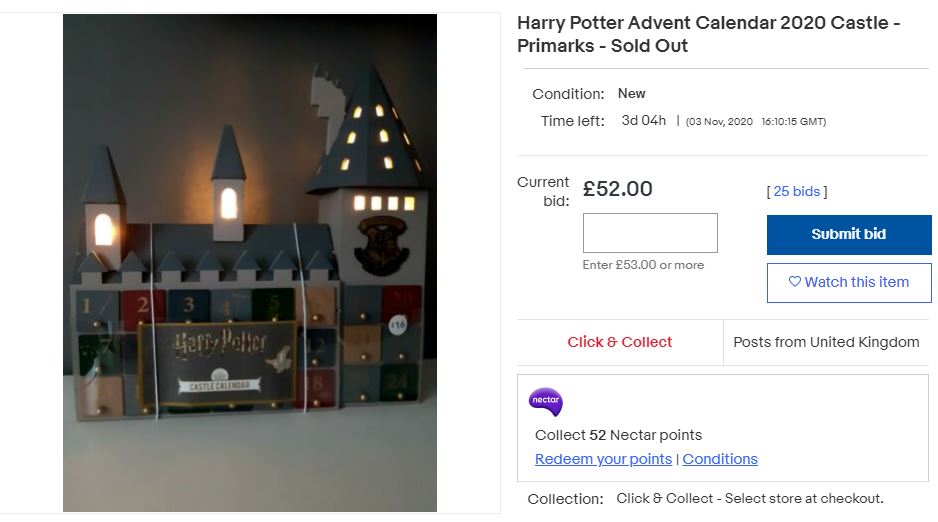 With three days to go until bids close one calendar on eBay is already on offer at £52.

Meanwhile, one person is offering one on sale for £149 – with the option of paying £14 a month in installments.

Primark, who shared a glimpse of the calendar on social media, said: “This year’s coveted Harry Potter calendar is making its way into stores…

“When the autumn term draws to a close, make sure you have this Hogwarts advent calendar on-hand to start the Christmas countdown in wizarding style.

“Fill the drawers with all kinds of treats – this will be a Christmas tradition you can continue for years to come!”

The castle was being stocked in more than 75 stores across the country, from Brighton to Edinburgh.

On Primark's Facebook page thousands of fans liked the design. 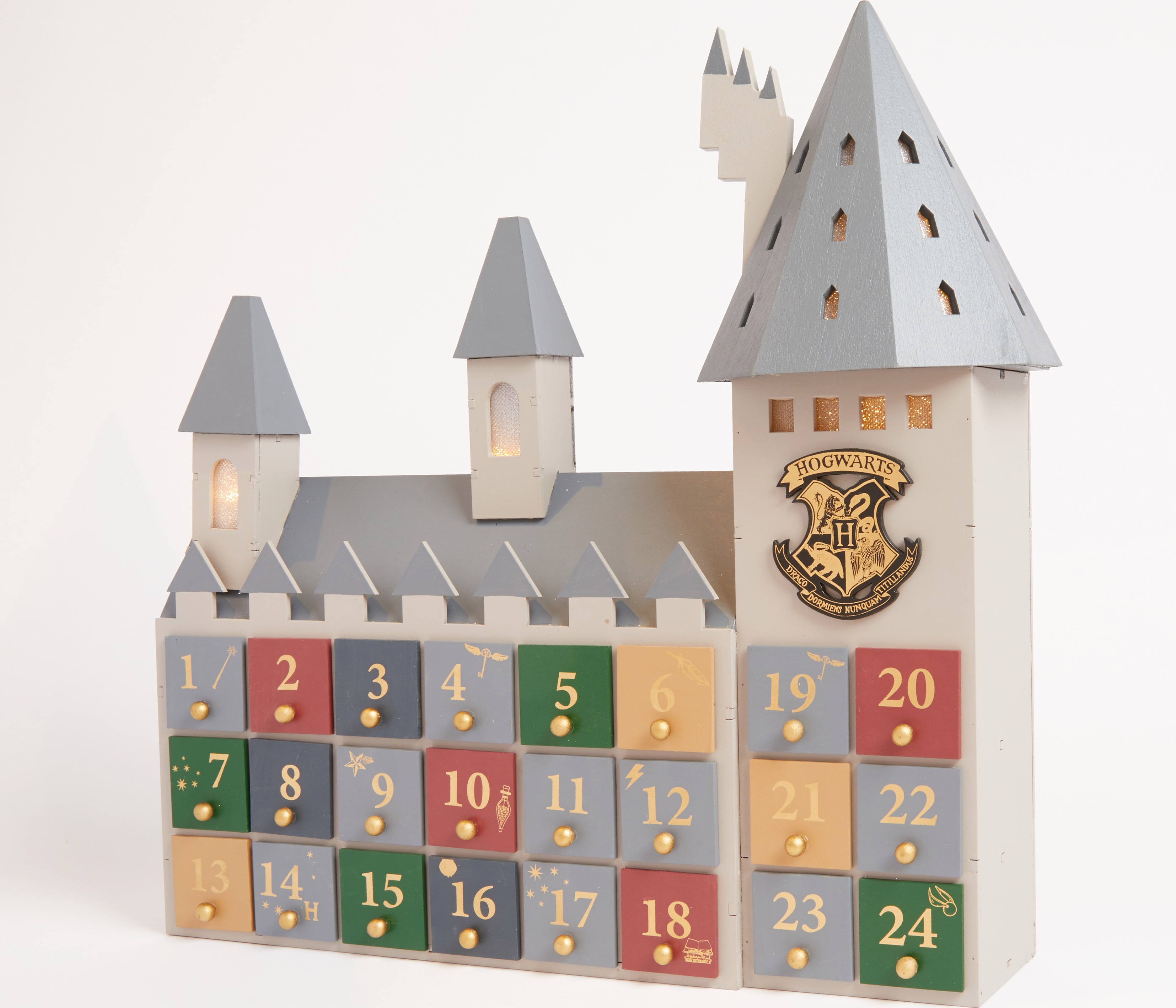 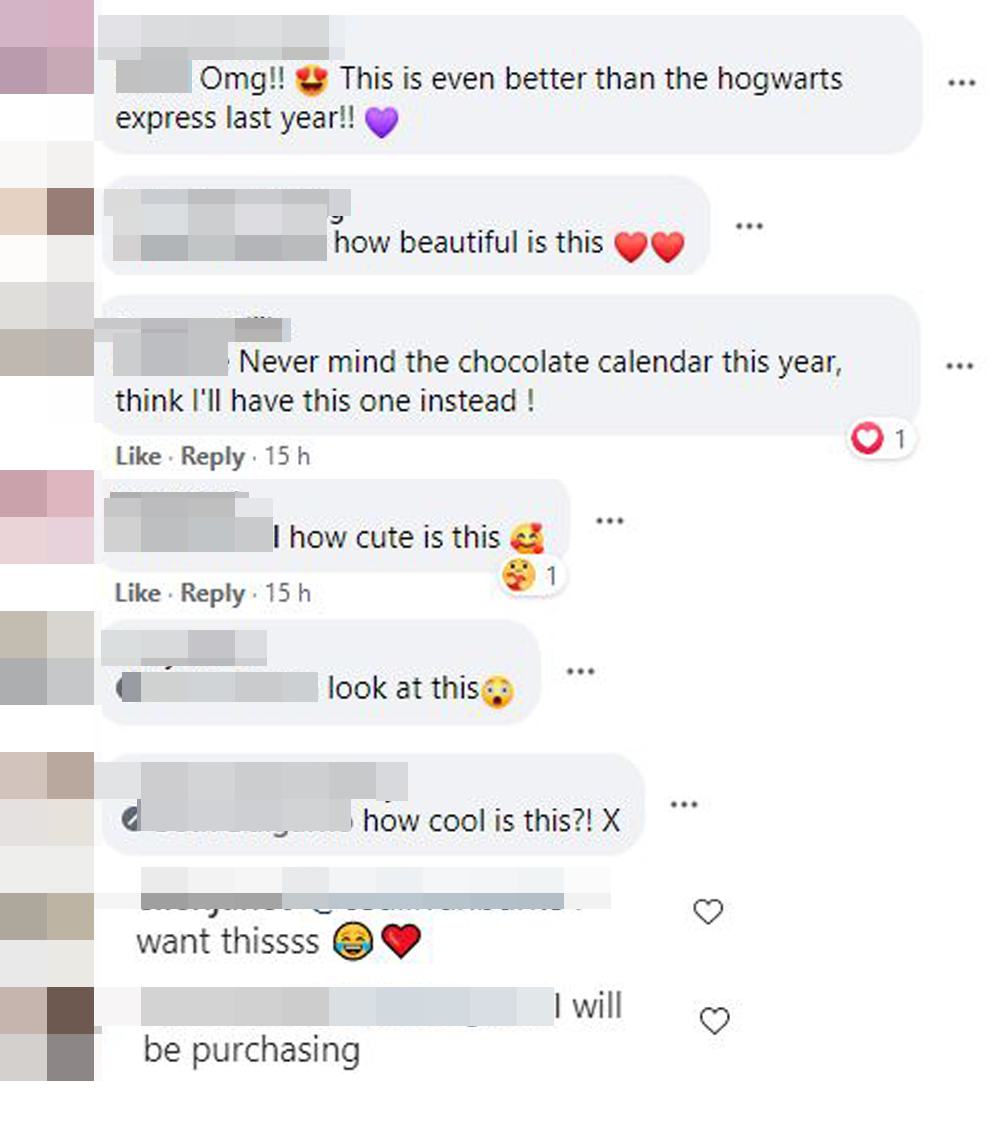 Commenting online, one fan wrote: “How cute is this.”

Another wrote: “Never mind the chocolate calendar this year, think I'll have this one instead !”

A third said: “How beautiful is this.”

Someone else added: “Look at this.”

While this person thought: “Omg!! This is even better than the Hogwarts Express last year!!”

And somebody else gushed: "Gosh this is beautiful."

Here are some of the UK Harry Potter locations you can visit which inspired some of the places in the book, including Diagon Alley.