TWO young sisters face being orphans after their mum was given a terminal cancer diagnosis – four years after their dad died.

Helen Davy, 44, was told she had a rare cancer a couple of months ago, and her thoughts first turned to her two girls Annalise, eight, and Kairen, five. 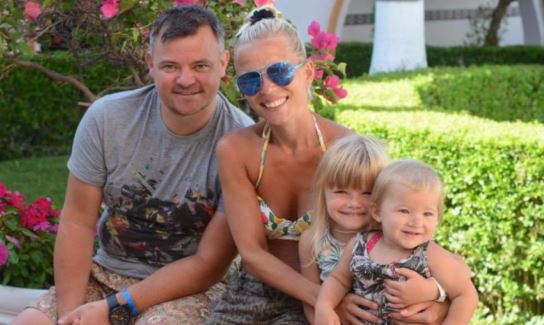 The brave mum, from Rotherham, was told her cancer –  pseudomyxoma peritonei (PMP), which starts in the appendix – had spread around her body and was inoperable.

It came after she had concerns for a year about what her stomach pains were caused by.

Helen told the Yorkshire Post: “They told me it was terminal. I am angry as I do wonder what the outcome would have been if it had been spotted and treated sooner.”

The IT technician is now trying to make the most of her time left with her daughters while friends and family fundraise for their future.

It comes just four years after Helen’s husband John died of a blood clot at the age of 37 due to a condition he had since the age of 18.

Helen was left to care for what she calls the “Three Musketeers”, unaware she would soon get a devastating diagnosis herself.

She said: “My first thoughts weren’t for me but for my girls and what was going to happen to them.

“My first thought was to put the house on the market as I have no savings, but then I decided that I wanted to keep as much normality as possible for the girls.

What is pseudomyxoma peritonei (PMP)?

It is so rare there are not official figures for incidence. But one study estimated an incidence rate of 3.2 cases per million people per year across Europe, and that 11,736 people were living with it across the continent in 2018.

The main treatments for pseudomyxoma peritonei (PMP) are surgery and chemotherapy.

It usually starts in the appendix, but rarely it starts in another part of the bowel, the bladder or the ovaries.

It is not known what causes PMP.

It usually srarts as a small growth, called a polyp. Cancerous cells spread to the lining of the abdominal cavity, called the peritoneum.

The charity Macmillan Cancer Support says it is hard to diagnose PMP because it may be there for years before showing symptoms.

Cancerous cells cause the build-up of a jelly-like substance called mucin that puts pressure on the abdomen.

Eventually it may lead to:

The main treatments for pseudomyxoma peritonei (PMP) are surgery and chemotherapy.

“We have had some legal issues within the family about what will happen to Annalise and Kairen but they are going to go and live with my twin sister, which hopefully will mean they can stay at the same school where they have lots of support.”

Helen said she first started to feel unwell a year ago, when she had a “terrible stomach ache” and a limp.

Docs said it might be appendicitis, but didn’t take it any further, Helen claims.

Two months ago she started having excruciating pains in her stomach and she was referred to hospital.

Scans revealed Helen had cancer and that it had spread from her appendix to her bowel – giving her bowel cancer – stomach, colon and pelvis.

She is starting chemotherapy soon in the hopes it will give her more time with her daughters, at least until Christmas.

And despite her prognosis, Helen is doing everything she can to keep things “normal” for her girls with advice from experts on how to warn them of what’s coming.

Friends of Helen have rallied around to raise money for the family.

Neighbours Paul, Lesley, Joanne Shaw and Becky Lee set up a Go Fund Me page which has already reached £15,500.

Paul wrote on the page: “Helen has stood strong and done a fabulous job of parenting whilst keeping her trademark smile and positive attitude throughout.

“Recently she has shown the courage and determination I can’t comprehend.

“Feeling worthless and unable to make this better we have decided to setup this page as some way of showing our love and support to our dear friend and her wonderful children.”

Helen, who said the support has been “amazing”, said: “All the money will go to the girls and their futures.

“I don’t want to take them on some lavish holiday abroad, to me it is about having fun while we can and that doesn’t cost a fortune.

“We have a kitchen disco every Saturday and we are planning to go to Butlins as I sometimes struggle to do things due to the pain. I am also making some memory boxes for them.”