Angelina Jolie and Brad Pitt’s eldest daughter Shiloh Jolie-Pitt has got the moves!

The 16-year-old has popped up in a series of videos shared by a Los Angeles dance studio and, well, it’s clear that talent runs in the family.

In one uploaded by dancer Hamilton Evans this week, the young groover – credited as Shilo Pitt – can be seen leading a trio to Doja Cat’s Vegas, which riffed on Hound Dog for the Elvis soundtrack.

Wearing a black Beatles T-shirt, black trousers and Vans, Shiloh owned centre stage at the Millennium Dance Complex in Studio City as she performed an energetic one-minute routine to the bop written for the soon-to-be-released Baz Luhrmann film.

It’s not the first time the teen has showed off her dancing prowess, having previously been seen in one of Hamilton’s dance classes to Lizzo’s About Damn Time, uploaded on May 22, which saw Shiloh appear alongside two other dancers again.

Fans were absolutely taken by Shiloh’s talent as they flocked to the comment section to praise the youngster, with one musing: ‘Wow, they are all very talented. And the Pitt child? Just…wow. Go get it, yougin’! [sic].’ 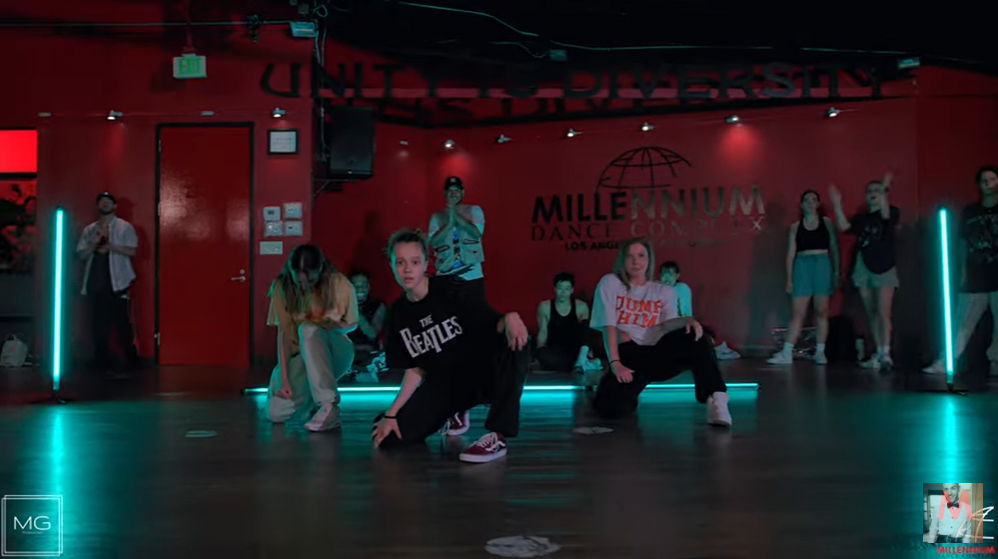 As another remarked at Shiloh’s likeness to her famous dad, one wrote: ‘Shiloh slayed once again.’

It’s been claimed both Ange and Brad, 58 – who split in 2016 after two years of marriage and nine years together, and also share children Maddox, 20; son Pax, 18; daughter Zahara, 17; and twins Knox and Vivienne, 13 – are super proud of Shiloh’s talent, after she reportedly began taking classes several years ago.

A source told Us Weekly earlier this month: ‘Brad and Angie are both very proud. They’d have no issue if she wants to turn pro, but they’re not pushing it on her by any means.’

An insider claimed: ‘Shiloh loves dancing. She’s seriously talented and has been going to these classes for a few years now.’

Shiloh, who previously voiced a character in 2016’s Kung Fu Panda 3, often pops up with Angelina on the red carpet and recently accompanied her mum to an Eternals gala in London

The 47-year-old was joined by five of her six children at the gala in London in October last year, with Shiloh rocking a black-and-white Dior dress that her mum donned two years before.

The teenager put her own spin on the printed gown, shortening the length, adding detailing to the top and gathering the straps.

It’s not just stunning outfits that Angelina is mindful of passing on to her daughters, as she also opened up about the impact that she hopes Eternals will have on them.

Speaking to Metro.co.uk at the star-studded ceremony, the actress – who plays Thena in Chloe Zhao’s blockbuster – explained that she wants them to know that they can be ‘feminine and imperfect’.

‘What I was happy to show my daughters is that being a strong woman also means being feminine and vulnerable and open and imperfect,’ she told us.

‘That’s what like most about [Thena], is that she struggles to be strong, and that kind of makes her stronger.’