Celeb Support and Donations for Struggling L.A. Restaurant May Help it Reopen

The L.A. restaurant owner who called it a “slap in the face” her place is shut down — while a film set operates next door — might be back in biz soon … thanks to an outpouring of support.

Employees at the Pineapple Hill Saloon & Grill in Sherman Oaks tell TMZ … awareness of the restaurant’s struggle has skyrocketed and led to an influx of donations. ICYMI … owner Angela Marsden called out Governor Newsom and L.A. Mayor Garcetti for apparent double standards with COVID-19 restrictions.

Pineapple Hill’s GoFundMe has currently raised about $150,000, and we’re told because of the generosity, there’s a strong chance it will be able to reopen for takeout soon … allowing employees to earn a much-needed paycheck again. 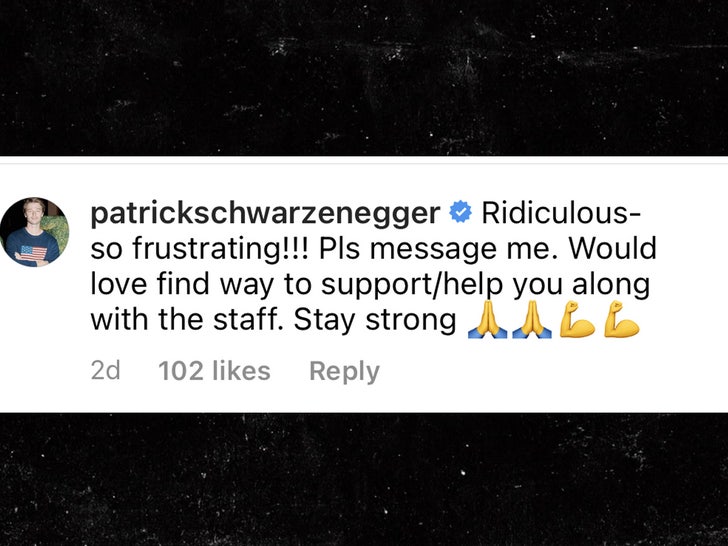 While celebs like Maria Shriver have encouraged people to donate, we’re told others like Ricky Schroder, Todd Hoffman (Wheels from “Meatballs”) and Maria’s son, Patrick Schwarzenegger, have also hit up the restaurant directly, offering to help in any way possible.

As for the restaurant’s newfound fame … employees tell us it’s a team effort right now to keep spreading the word about why small businesses need to be allowed to operate outdoors. Some of the workers are even helping Marsden schedule media interviews to do so.

Pineapple Grill tells us it did get some backlash from people who thought they were doing a disservice to the entertainment workers who were being employed on the film set. It wants to clarify it has no problem with that, and it supports all those who were working on the set of NBC’s “Good Girls” that day.

We’re told the restaurant is staffed by many people working in show business themselves … and they simply want everyone to be able to make a living.