Did Meghan And Harry Really Consider Revealing Who Said Racist Comments About Archie To Oprah? 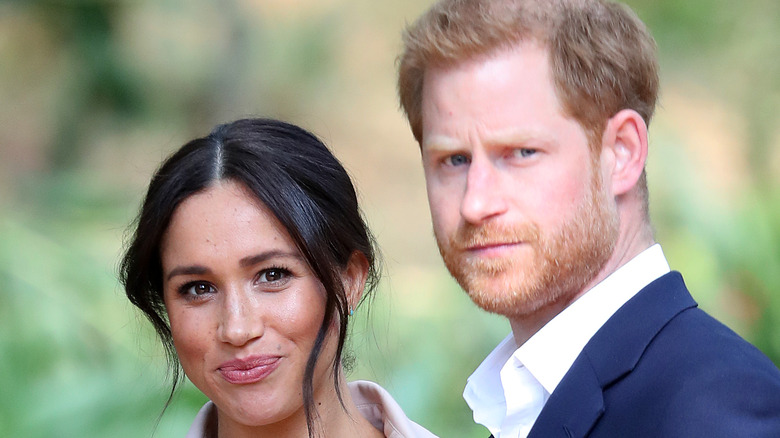 When Prince Harry and Meghan Markle sat down for their boundary-pushing interview with Oprah Winfrey, we were prepared for them to spill the tea more than perhaps any royals, or former royals, had before. But we didn’t know quite how much would be revealed during the lengthy, jaw-dropping chat. As People reported at the time, one of the biggest bombshells came when Meghan and Harry revealed an unnamed senior royal had expressed “concerns” and had several “conversations about how dark [Archie’s] skin might be when he’s born.” When Winfrey pressed Harry to name and shame the person, he refused, explaining, “That conversation I’m never going to share.”

The moment generated shocked headlines all over the world, prompting Prince William to maintain, “We are very much not a racist family,” when prompted by a Sky News reporter during his first trip out with wife Kate Middleton following the interview. Harry’s elder brother also confirmed they hadn’t spoken yet, but William ominously intoned he was planning to make contact shortly. Speculation was rife that either Queen Elizabeth or Prince Philip, who subsequently passed away, was the racist in question but Harry confirmed it was neither of them. Buckingham Palace released a statement simply noting, “recollections may vary,” and promised to deal with any issues in house.

However, although the Sussexes were adamant they wouldn’t be revealing the culprit, new reports suggest they definitely considered doing so at one point.

The Sussexes had a difficult decision to make

According to a damning report in the Daily Mail, the upcoming epilogue to Omid Scobie and Carolyn Durand’s “Finding Freedom” makes it clear that Prince Harry and Meghan Markle strongly considered naming the royal who made racist remarks about their son Archie prior to his birth. The beloved couple reportedly weighed up “sharing this detail” during their interview with Oprah Winfrey, but Meghan ultimately acknowledged while discussing it with her that doing so would be “very damaging to them.” The leaked epilogue also suggests Prince William was “furious” they discussed private family matters in such a public manner, but Meghan found it “cathartic” and “liberating.” Moreover, a source purporting to be a close friend claimed the Duchess was disappointed nothing had been done to follow up on their claims in the months after the interview. Likewise, the wording of the palace’s statement was heavily criticized.

It’s worth noting the Sussexes were not interviewed for “Finding Freedom.” Royal experts Scobie and Durand completed the book with the help of sources reputedly close to the couple, but it’s completely unauthorized. However, although things remain frosty between Meghan and Harry and the royal family, there’s hope these new revelations may force them into finally sorting things out. A source admitted, “it will take time to get past the hurt.” Moreover, the monarchy has to take some accountability for what the Sussexes went through before they can move forward. Buckingham Palace declined to comment.