After a screenshot of a YouTube video titled ‘The Life and Sad Ending of Dionne Warwick’ spread on Twitter, the ‘Walk on By’ hitmaker releases a less-than-a-minute clip proving she is alive and kicking.

AceShowbiz –Dionne Warwick is taking fake rumors about her death in strive. Having been winning social media users for her candid tweets, the “That’s What Friends Are For” singer once again delighted fans with her take on new online hoax about her death.

Two days after a screenshot of a YouTube video titled “The Life and Sad Ending of Dionne Warwick” was brought up on Twitter, the 80-year-old music icon proved that she is very much alive. She even offered a hilarious response to the fake news by simply tweeting, “Oh no!” 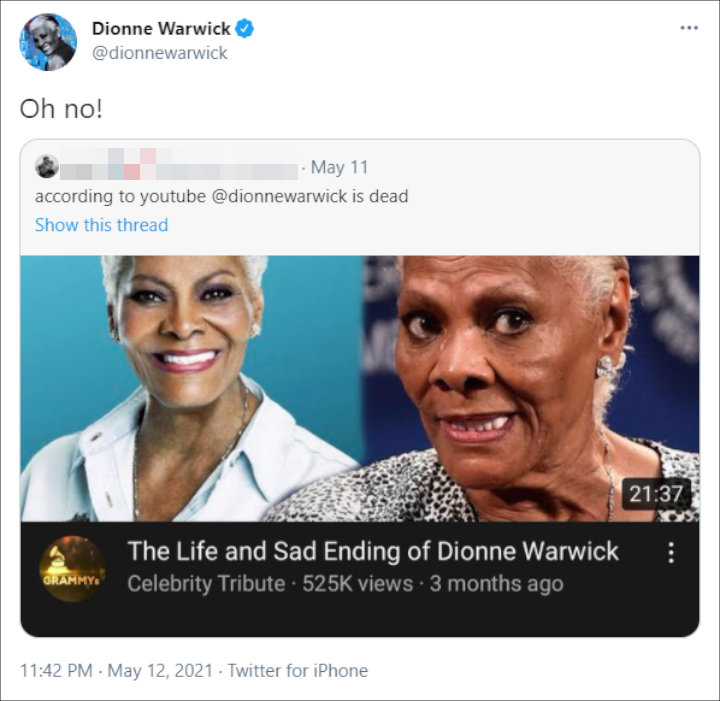 Dionne came up with another biting tweet hours later. “Proof of life. Goodnight from a very alive Dionne Warwick,” the “Walk on By” hitmaker wrote on the micro-blogging site. Along with it, she put out a short clip in which she assured that she is “alive and kicking.”

The Grammy winner went on to playfully scold fans for making her a subject of death hoax. “This is the second time y’all made me dead, which I think is not very nice,” she said in the less-than-a-minute video. She went on to thank those who was “caring enough to have sorrow” for her, and was unable to hold back her laughter. 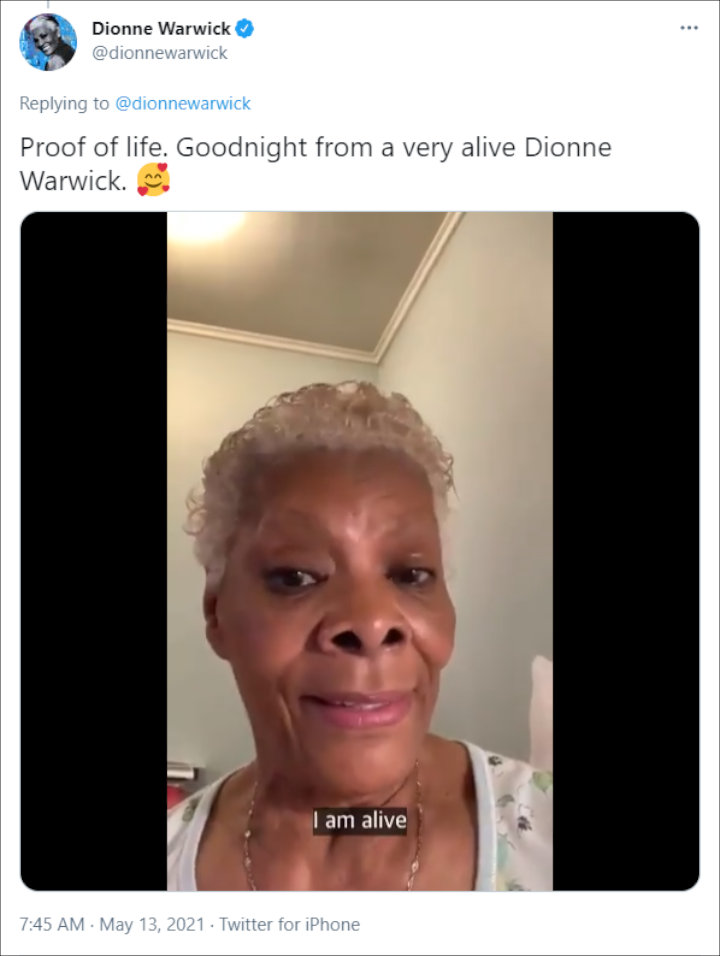 Dionne Warwick assured fans she is very much alive and kicking

Dionne’s ticklish jabs at her online death hoax came more than five months after she roasted Chance The Rapper on Twitter for his stage name. At the time, she tweeted, “Hi, @chancetherapper. If you are very obviously a rapper why did you put it in your stage name? I cannot stop thinking about this.”

The “I Say a Little Prayer” singer had also questioned The Weeknd about the misspelling of his stage name. “It’s not even spelled correctly? @theweeknd… If you have ‘The’ in your name i’m coming for you. I need answers today,” she wrote on the blue bird platform.

Both musicians were left delighted by Dionne’s tweets. Chance replied, “Sorry I’m still freaking out that u know who I am. This is amazing! I will be whatever you wanna call me Ms Warwick. God bless you,” while Weeknd gushed,”I just got roasted by Dionne Warwick and I feel honored! You just made my day.”