She launched a successful modeling career long before her son became one of the world’s most influential entrepreneurs.

Maye Musk showed off her timeless style Monday in a short video posted to Instagram advertising her efforts to help those impacted by the ongoing coronavirus pandemic.

The 71-year-old model kept the video within the family by scoring it to Violence, a song by Elon’s partner Grimes, 32. 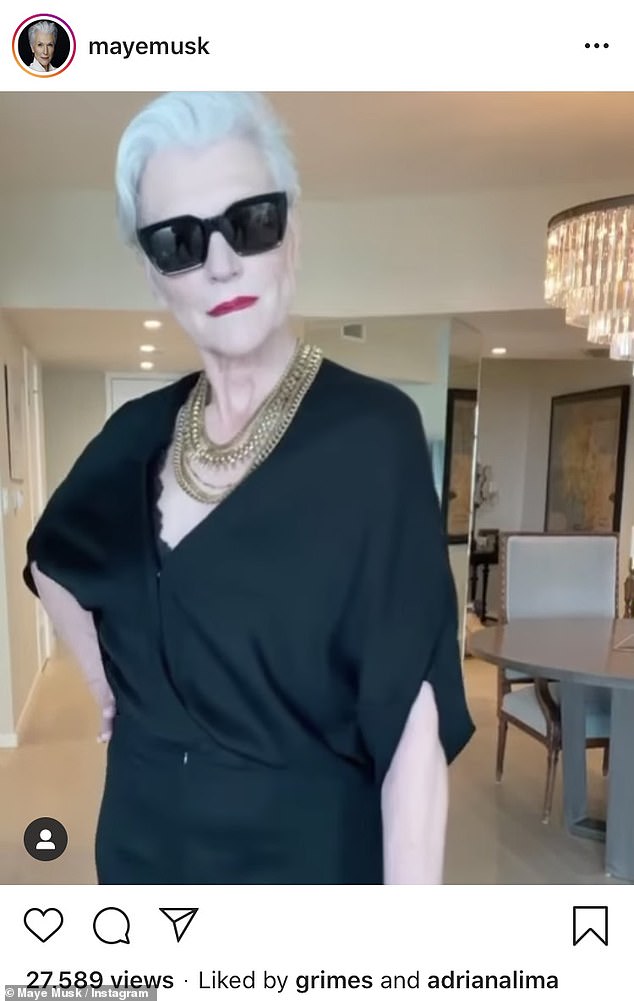 Doing her part: Elon Musk’s mother Maye Musk, 71, showed off her catwalk skills in a video raising funds for fashion workers affected by the coronavirus that was scored to a song by her son’s girlfriend Grimes, 32

Maye’s video featured her standing in her apartment in a plunging black satin blouse paired with flowing black slacks.

She added multiple gold necklaces for some added flair, along with chunky black sunglasses and a casual pair of sandals.

She turned around and strutted across the room, before circling back for a dramatic return.

‘Why am I doing a runway walk in my apartment?’ she asked in the caption, before answering her own question. 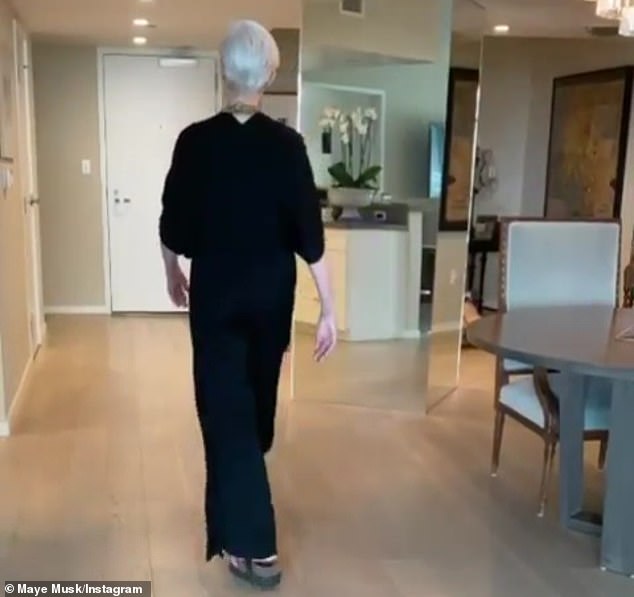 Back in black: Maye’s video showed her in her apartment in a plunging black satin blouse paired with black slacks. She added chunky black sunglasses and a casual pair of sandals 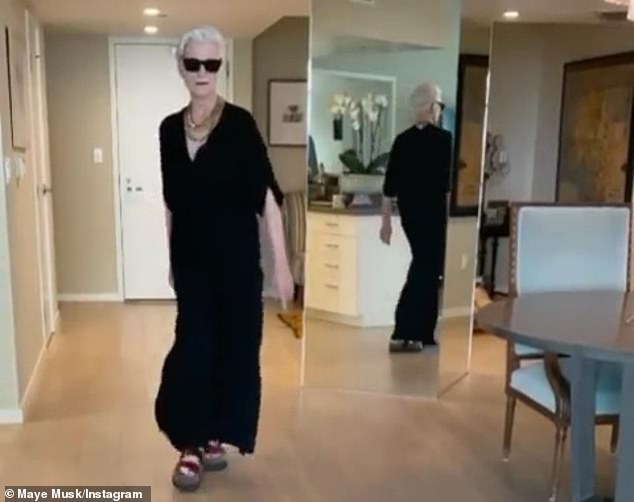 For a good cause: She turned around and strutted across the room, before circling back for a dramatic return 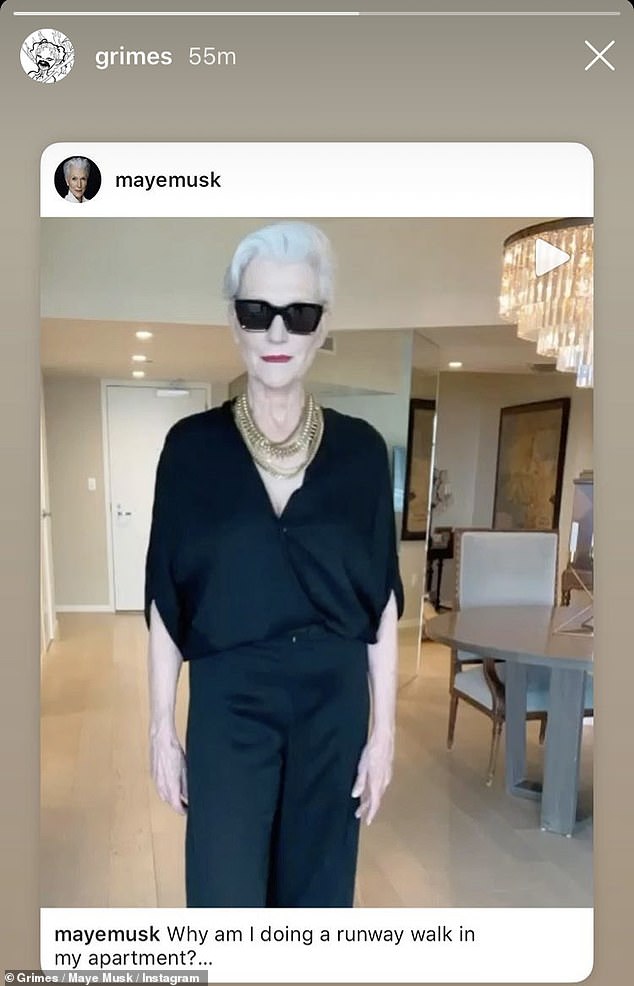 Signal boosting: The clip featured Violence, a track off Grimes’ album Miss Anthropocene. The electronic musician reposted the clip to her Insta Stories

The CoverGirl spokesmodel revealed she was partner with New York Fashion Week and her modeling agency IMG to support Runway for Relief and CVFF: A Common Thread, organizations devoted to raising funds and awareness for fashion industry workers harmed the coronavirus-caused shutdown.

She encouraged her 300K followers to donate themselves, or to film their own runway walk and tag others.

Maye’s modeling career began as a pageant queen in her adopted home of South Africa in the late-1960s.

The Canadian-born beauty spent her time in the US and Canada beginning in the late-1980s, where she continued her modeling career after taking time to earn master’s degrees in dietetics and nutritional science.

More recently, she became the oldest CoverGirl spokesmodel ever at age 69, while also finding time to appear in Beyoncé’s Haunted video. 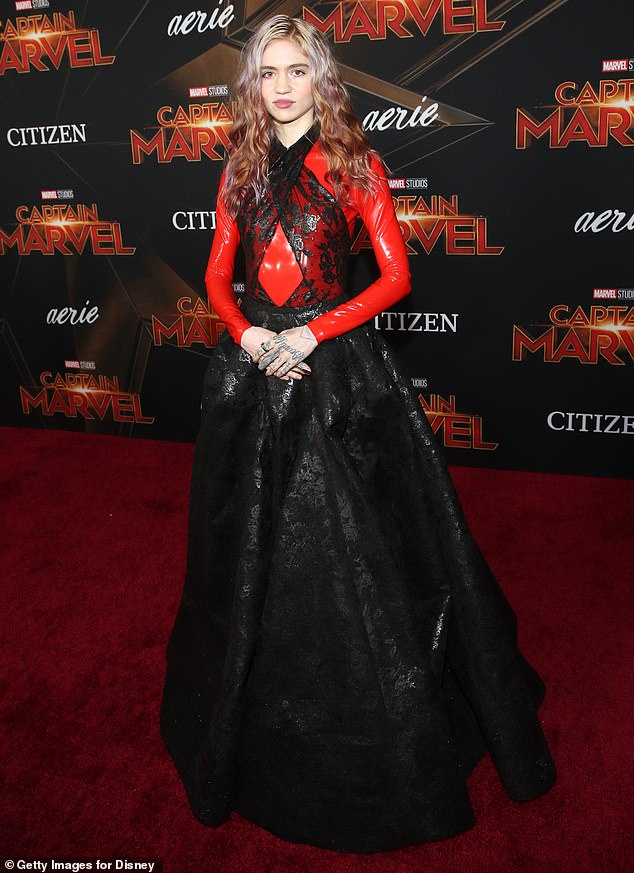 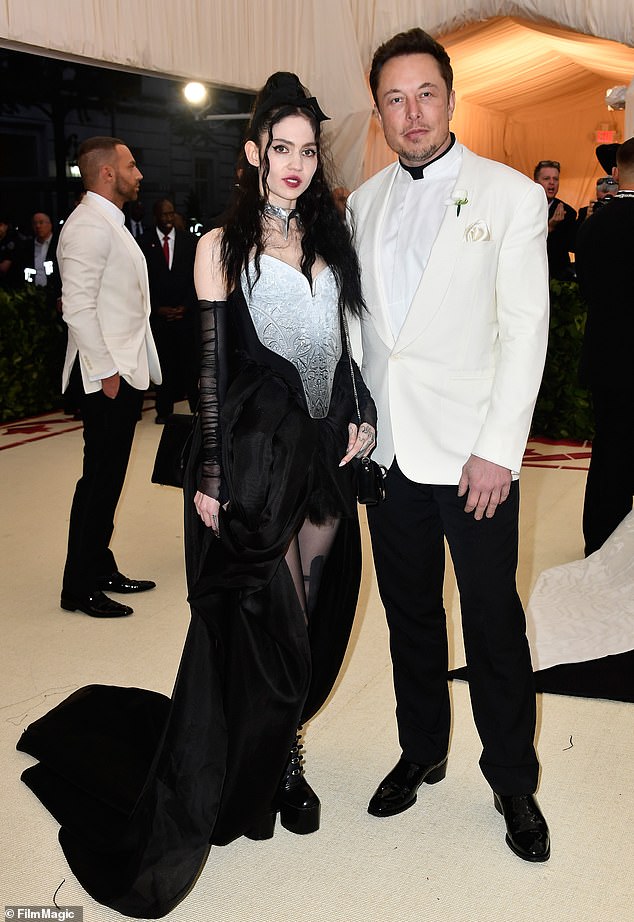 New love: The couple took their relationship public in May 2018. Musk has been married three times before, twice to Westworld actress Talulah Riley; pictured in 2018

Her clip featured a banger by her son’s girlfriend Grimes, off her critically acclaimed album Miss Anthropocene, which was released in February.

The singer and electronic musician, who’s expecting her first child with Musk, helped boost Maye’s video by reposting it to her Insta Stories for her 1.2 million followers to see.

During a February Twitter Q&A, she revealed the couple would be referring to their child by gender-neutral pronouns and wouldn’t be foisting a gender identity on them.

No gender reveal: Grimes has declined to reveal the sex of her unborn child 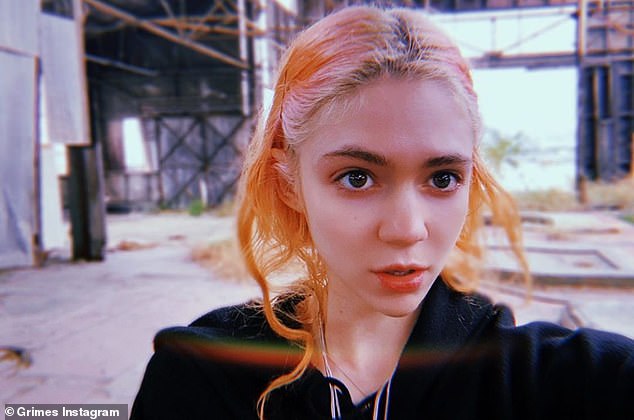 Loosening up: The musician gave up her vegan diet after 20 years because of her cravings for dairy

Though Grimes seems excited about her pregnancy and has posted multiple grotesque science fiction–styled photos of her baby bump, the intense cravings accompanying it have led her to abandon her 20-year vegan diet in order to have real milk and butter.

‘Actually lately the one pregnancy craving I have is just a glass of milk. Which is so weird because I haven’t had a glass of milk in probably 20 years, but lately I’ve just been having a glass of milk,’ she said in a video for Harper’s Bazaar.