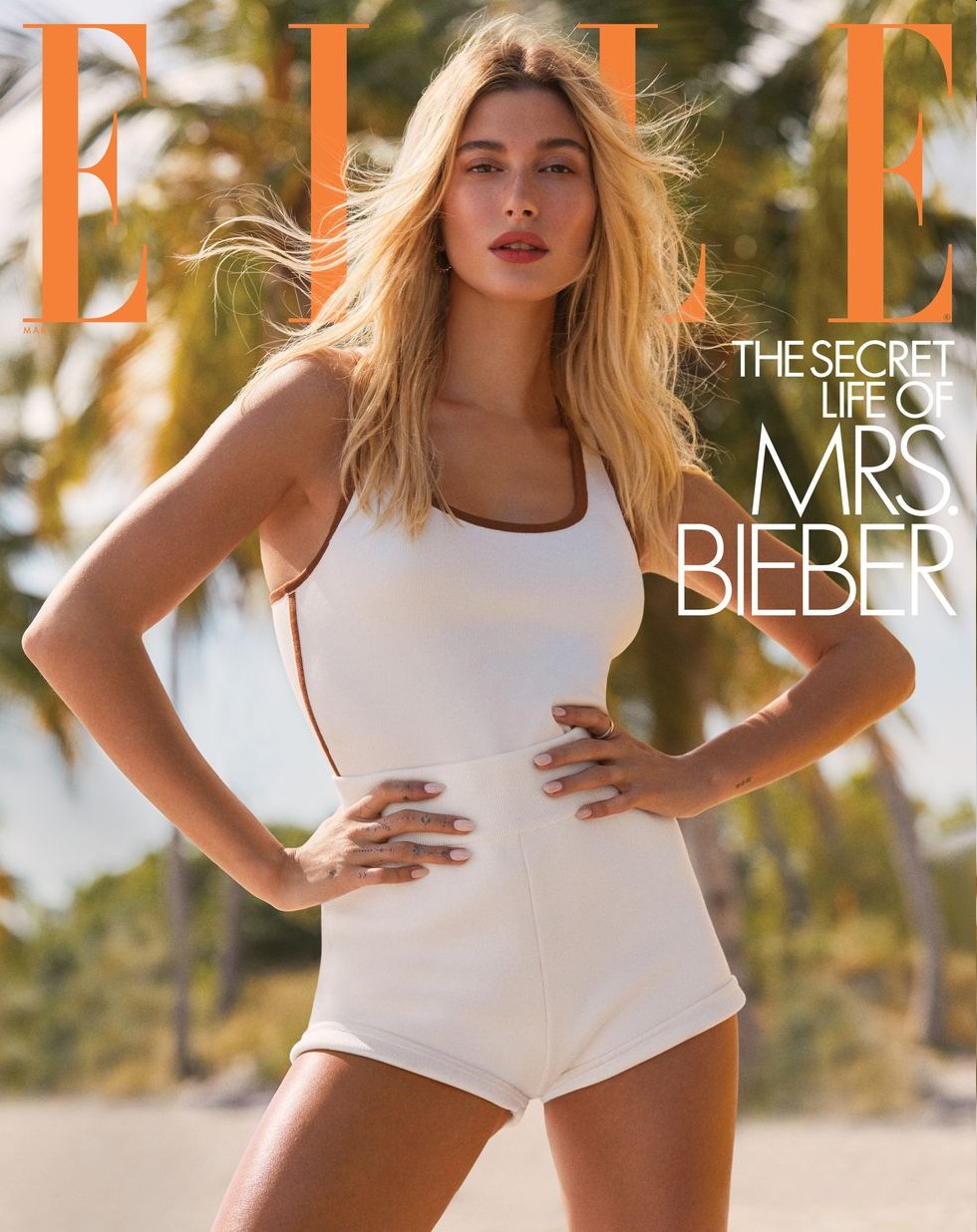 Have you noticed something odd about Hailey Baldwin-Bieber? She gets better-looking the longer she’s married to Justin. The marriage has effectively killed Justin’s looks, but Hailey has gone from “nothingburger blonde” to absolutely radiant. Marriage certainly agrees with her (but not him, weirdly). Anyway, Hailey covers the latest issue of Elle, and the photoshoot is very sunny and beachy and it suits her. The interview is a lot about marriage, her faith, her childhood and more. She’s not really promoting one specific thing, just FYI. You can read the full piece here. Some highlights:

Her mom is Brazilian: “I love the culture of Brazil. It reminds me of my family—my grandma and my mom.” At home, she says, “I can sing a lot of Brazilian music in Portuguese, and I make a really good pão de queijo.”

She moved out at 17: “I’ve always been super independent since I was really young. When I moved out, I was like, ‘Bye guys! See you later!’ I started modeling and made enough money to pay the rent. I was like, ‘Okay, cool. If this is going to work for me, I’m going to stick with it, because I enjoy making my own money and living on my own.’”

Her other career options: “I wanted to maybe go to FIT and learn about design. In another life, I would have also loved to be a doctor. I’m interested in neuroscience; I love learning about the brain.”

Getting married at a courthouse: “When we first got married, we were just figuring out our life together. I felt like putting a wedding in the middle of all of that would be really hectic and stressful.” Justin was also wrestling with his own private health battle. “He was really sick. He has Lyme disease, and he was dealing with a bunch of medical stuff. We didn’t have a diagnosis… And it was hard because everybody from the outside was being super mean and judgmental, saying he looked like he was on drugs, saying how unhealthy he looked, when in truth, he was not healthy and we didn’t know why. It was months of me being a new wife trying to help him figure out what was wrong and what was going on. Now he’s perfectly healthy. But going through that and then trying to be like, ‘So where does our wedding fit into this?’ didn’t feel like the vibe at all…. We went straight into figuring out the hard stuff. Because you never know what can happen with someone’s health. When you don’t know what’s happening, it’s really scary. And then you have the opinions of everybody from the outside, and it just sucks.”

House rules: “I definitely enjoy being home more than I enjoy being away,” she says. She says she and Justin love cuddling on the couch, watching reruns of Friends with their cats, Sushi and Tuna. They are starting to establish some house rules, too. “I try to read more than be on my phone in bed. We have a rule: No phones in bed unless it’s absolutely necessary.”

They didn’t move in together until they were married: “Neither of us believed in doing that, but to each their own. If you live with a boyfriend or a fiancé or whatever it is, that’s cool.”

Her Christianity: “Being able to share that with each other—to have that bond of faith and spirituality—is so [critical] for us. It’s the most important part of our relationship, following Jesus together, being a part of the church community together. It’s everything.”

Why she goes to Hillsong: “As I got older, it got harder to follow church and the Bible because it felt very adult. I don’t want to sound wrong, but it was boring. I didn’t care about it anymore, until I found a church I felt was geared toward young people. And for me, that was the Hillsong Church in New York City. It started to feel like my own little community of people who were also young and following God and just immersed in a church community. Then I developed my own relationship to church and my own relationship with God, separate from being raised that way by my parents. That’s been a cool journey for me.”

I have no comment on the Lyme Disease, but I will say that I find it odd that Lyme Disease is becoming so prevalent in the celebrity community. I also think it’s textbook *something* that as soon as Hailey was super-independent and moved away from home, she joined Hillsong. She wanted that structure and Hillsong reportedly has that kind of cult-ike atmosphere. And she and Justin both needed that structure, I suppose. I had no idea her mom is Brazilian though!

@haileybieber on reconnecting with @justinbieber: “He had grown up so much. I was actually shocked. I think I had grown up a lot, too. He was somebody I’d always cared about so deeply and loved very deeply. Obviously, it took work and getting past things between the two of us, but it was all very worth it. He’s an incredible, amazing man and such a good partner to go through life with.” Link in bio for the full cover story.⁣ ⁣ ELLE March 2020:⁣ Editor-in-Chief: @ninagarcia⁣ Creative Director: Stephen Gan Cover star: @haileybieber⁣ Writer: @Molly_lambert⁣ Photographer: @zoeygrossman⁣ Stylist: @annatrevelyan⁣ Hair: @panosphair⁣ Makeup: @morgane_martini⁣ Manicure: @egoceo⁣ Producer: @hgproducers⁣ Props: @miami_kiteboarding