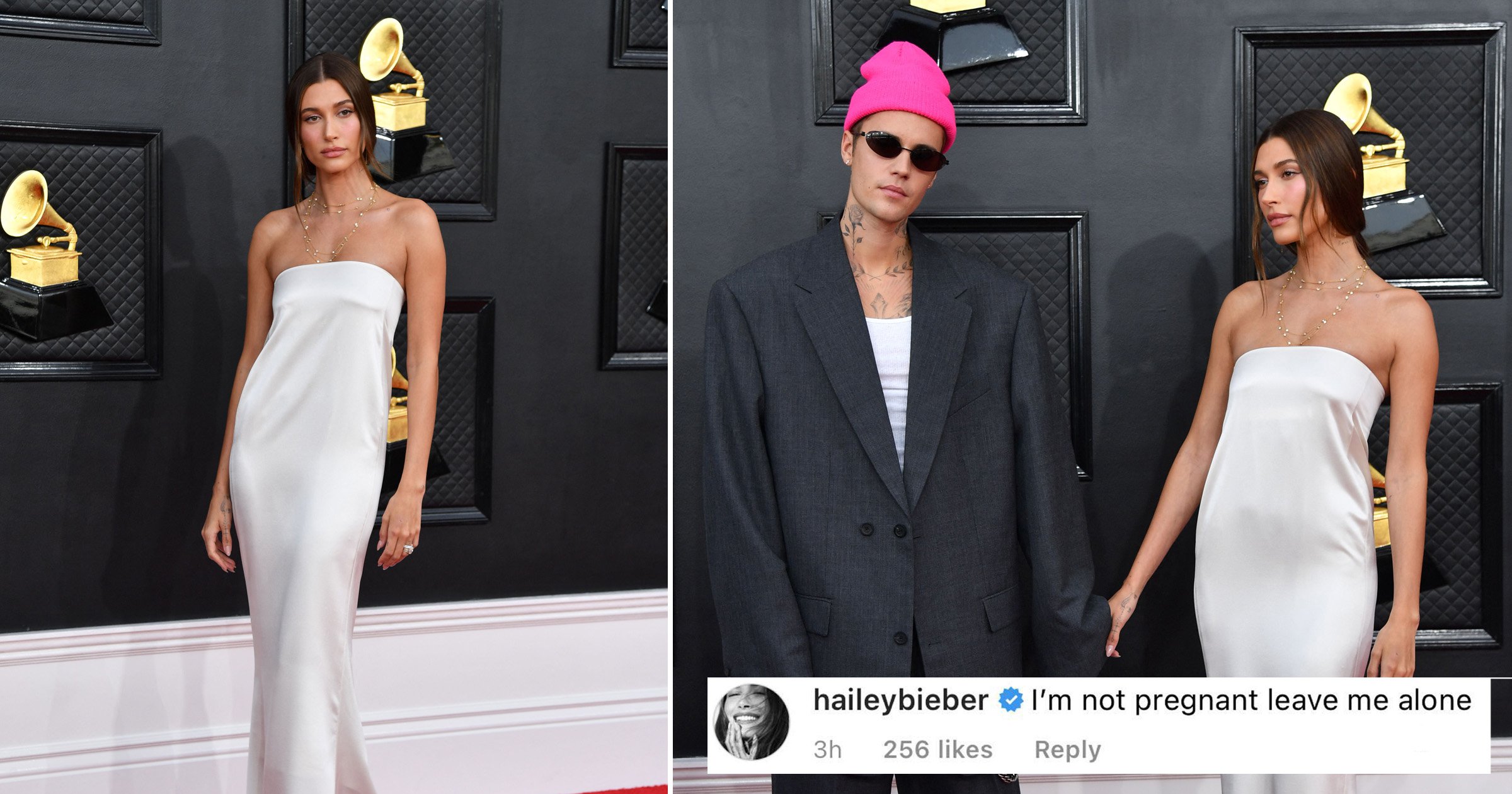 Hailey Bieber has hit back after an outlet speculated over her being pregnant, following her appearance on the red carpet at the Grammys with husband Justin Bieber.

The 25-year-old model, who tied the knot with husband Justin in 2018, rocked up to the glitzy music awards to support the Peaches singer after he received eight nominations for the prestigious gongs.

It was the first event the pair attended together since Hailey was hospitalised with a blood clot scare in March, which her husband admitted had been ‘really scary’.

Looking stunning in a white flowing strapless gown with delicate gold jewellery, Hailey even shared a smooch with Justin for the cameras.

However, the (slightly) looser fitting nature of her dress led to claims that fans were ‘convinced’ she was pregnant due to her outfit choice.

The influencer left no room for doubt, responding to the headline on Instagram with a succinct: ‘I’m not pregnant leave me alone.’

Fans rushed to defend her, with one writing ‘Respect Hailey!!!’ while another posted: ‘Stop commenting about others [sic] people bodies.’

‘Leave her alone!!’ blasted another fan.

‘I think everyone is tired and bored with it, especially her,’ pointed out one follower.

Others decided to turn the comment on its head and drew attention to Justin’s over-sized Balenciaga suit, which he paired with a pink knitted beanie and chunky black Crocs.

‘Do y’all see what Justin is wearing? Maybe he’s pregnant,’ bristled one fan.

‘No one suspected HE was pregnant with that jumbo oversized suit?’ asked another of Hailey’s defenders. ‘Seems perfect for hiding a baby bump,’ they added.

The couple previously batted away pregnancy rumours after the Met Gala in September, when Justin ‘posed innocently’ with his hand on his wife’s stomach.

Hailey was also forced to deny she was pregnant after Justin cutely referring to the couple as ‘mum and dad’ in one of his Instagram posts.

Cue fans going wild, with Hailey prompting responding to her husband and commenting: ‘I think u should maybe change this caption to *Dog Mum and Dad* before anyone gets it twisted.’

Sadly, Justin missed out this time on converting any of his Grammy nods into wins although he did deliver a performance of his hit song in shiny leather trousers, which also had his fans in a lather.

Album of the year

Jon Batiste – We Are

Record of the year

Song of the year

Foo Fighters – Waiting on a War

HER – Fight for You

Tyler, the Creator – Call Me If You Get Lost

Chris Stapleton – You Should Probably Leave

Cedric Burnside – I Be Trying

Soja – Beauty in the Silence

CeCe Winans – Believe for It

CeCe Winans – Believe for It

Producer of the year, non-classical

Don Cheadle – Carry On: Reflections for a New Generation From John Lewis

Bo Burnham – All Eyes on Me