Harry Styles was spotted with ‘The Crown’ actress Emma Corrin as they filmed scenes for their upcoming movie ‘My Policeman’ in East Sussex, U.K.

Harry Styles, 27, channelled the ’50s with a pair of short shorts! The Fine Line singer was spotted wearing the revealing bottoms while filming scenes for his new movie My Policeman in East Sussex, United Kingdom on Friday, May 7. He paired the dark colored teal shorts with a white golf shirt and gray sweater vest, finishing his look with a pair of sneakers. He kept his brunette hair slicked to the side. At one point, he placed an oversized coat over his look to keep warm in the 46 degree temperature. 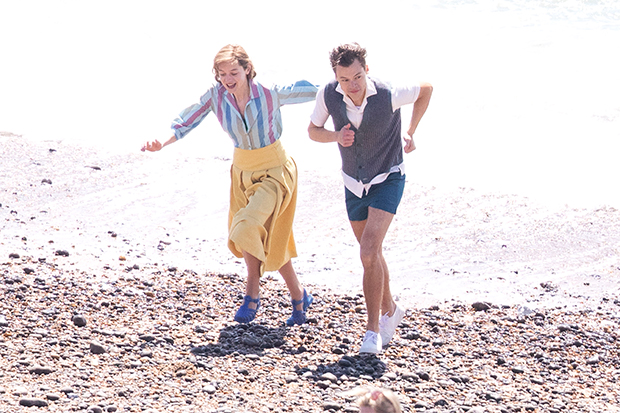 The British born singer was spotted on the beach with his co-stars, including The Crown alum Emma Corrin and David Dawson. The trio were laughing and smiling as they walked away from the water. Emma, who replaced
Corrin replaced Lily James for the role of Marion, looked gorgeous in a midi-length pleated yellow skirt and blue-and-pink striped blouse. Her styled costume was finished with a pair of blue clog-style shoes. For David’s part, he wore a bright orange pair of shorts and a white tank top with a blue button down over top. 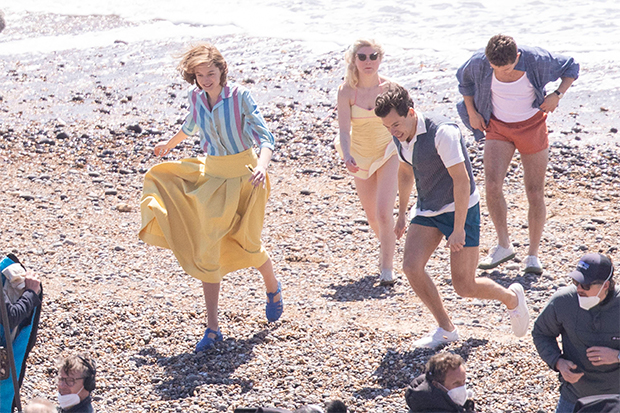 While the former One Direction singer is best known for music, Harry has dabbled in the film world. Back in 2017, he made his silver screen debut Dunkirk alongside Oscar winner Mark Rylance. He was also recently working on Don’t Worry Darling alongside his latest flame Olivia Wilde, 37, who also directed the project (Harry replaced Shia LaBeouf in the movie). His iMDB page also includes a credit for a 2020 short titled Ouverture of Something that Never Ended. 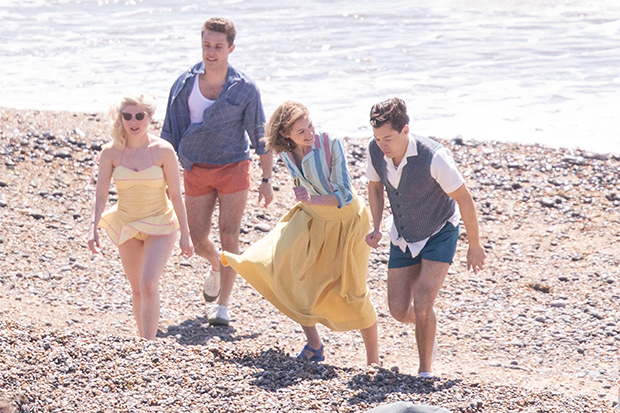 In My Policeman, which is based on a novel by Bethan Roberts, Harry is set to play a gay police officer named Tom in the 1950’s. His character engages in a secret relationship with David’s character Patrick, a museum curator who is married to Emma’s character Marion. The Greg Berlanti produced project will debut on Amazon Prime Video at a later date.

In recent months, Harry has been spotted infrequently with Olivia — including a romantic outing to a January wedding for his manager Jeffrey Azoff. “He really likes Olivia, but he doesn’t want to make it a relationship that’s always in the news. He wants their relationship to be between the two of them, and that’s why he doesn’t want to talk about it, because he doesn’t want Jason to feel bad or threatened by him,” a source close to Harry told HollywoodLife EXCLUSIVELY back in April.