Heidi Klum shared a brand new mirror selfie that featured her gorgeous daughter Leni and youthful mom Erna as they showed off blonde hairstyles and smiles together.

Heidi Klum, 47, proved she has one good looking family when she shared an eye-catching selfie that included her mom Erna and 16-year-old daughter Leni! The German model was standing in the middle of her look-alikes as they all stared into a mirror and smiled for the camera, in the new snapshot. The ladies also wore black and white outfits and their matching blonde locks were all proudly on display as they showed off the gorgeous moment.

Heidi revealed that the new pic was taken during her photo shoot for the cover of Vogue Germany in the caption. “In the Studio with my M❤️M and @leniklum for @voguegermany,” the caption read. Although the comments for the post were turned off, we can guarantee fans would respond with nothing but compliments since the photo was truly epic and a rare glimpse into some of Heidi’s beautiful family members.

Before she shared the latest pic, Heidi and Leni stunned on the January/February cover of Vogue Germany, when it as released on Dec. 10. They wore blazers over tees and loose pants that matched in colors of blue, fuschia, and green on the cover shot and showed off their mother and daughter bond as Heidi gave her gal a kiss on the cheek. They also had matching hairstyles that had their long straight locks down and parted in the middle. 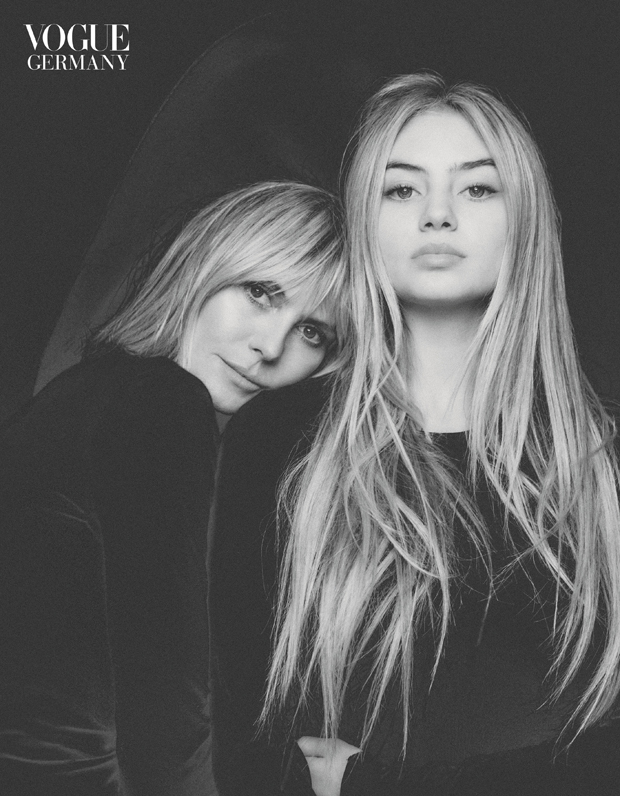 Heidi shared the epic cover pic to her Instagram and added a sweet letter in German to her daughter in the caption. “I’m so proud of you,” the letter loosely translated in English. “And not because you chose this path. I know that no matter which way you go, it will be your own. You always know exactly what you want and what you don’t want. You are not a mini-me. And I’m happy for you that you can now show who YOU ​​are.”

Heidi concluded the letter by telling Leni how proud she is of her for being a “confident young woman” and “great person with your heart in the right place” and gave her a bit of advice.

“I hope that no matter where you are, you always carry what I have given you over the past 16 years,” she wrote. “For the big decisions in life, but also for the very little ones. And even if you often don’t want to hear your mom’s clever advice, here’s another one: never do something you don’t want to do and always listen to your gut instinct.”