It Starts On The Page: Make A Move & Read The Queens Gambit Pilot Script By Scott Frank

After a mysterious opening scene that tracks the fallout of a decadent Paris night and an almost neglected chess match, the first episode of The Queen’s Gambit masterfully explores the forlorn early life of the orphaned Elizabeth Harmon and her rise to international fame.

And there are a lot of those green pills in the Scott Frank-penned and -directed “Openings,” the latest installment of Deadline’s It Starts On the Page. The ongoing series highlights the scripts that are serving as the creative backbone of the TV awards season the year. The scripts are all being submitted for Emmy consideration this year and have been selected using criteria that includes critical acclaim, a range of networks and platforms, and a mix of established and lesser-known shows.

Responsible for bringing chess to a mainstream audience in a manner unknown since the glory days of Bobby Fischer, the 1960s-set Queen’s Gambit was global sensation for the streamer within hours of its October 2020 launch during some of the darkest days of the coronavirus pandemic. One of Deadline’s Top 10 shows of 2020, the limited series starring Anya Taylor-Joy follows young Beth as she’s abandoned to a Kentucky facility in the late 1950s, when she discovers an astonishing talent for chess while battling addiction and the struggles that come with the true gift of genius.

Based on Walter Tevis’ 1983 novel, The Queen’s Gambit the seven-episode series was created by Logan screenwriter Frank and Allan Scott.

Amidst the seeds laid down by “Openings,’ the awakening the young Beth (portrayed by Isla Johnston) experiences out of being exposed to chess by the orphanage’s custodian Mr. Shaibel (Bill Camp) literally opens up new doorways for the character. As they say, see the whole board.

A double Golden Globe winner, the prodigy tale checkmated others online to become Netflix’s most watched limited series in the days after its debut with more than 62 million households tuning in for least part of the show.

Co-starring Marielle Heller as Beth’s adopted mother Alma Wheatley and Moses Ingram as Beth’s close friend, among others, the artfully constructed The Queen’s Gambit also won a SAG Award and more so far.

Protect your Queen, and read the “Openings” script here: 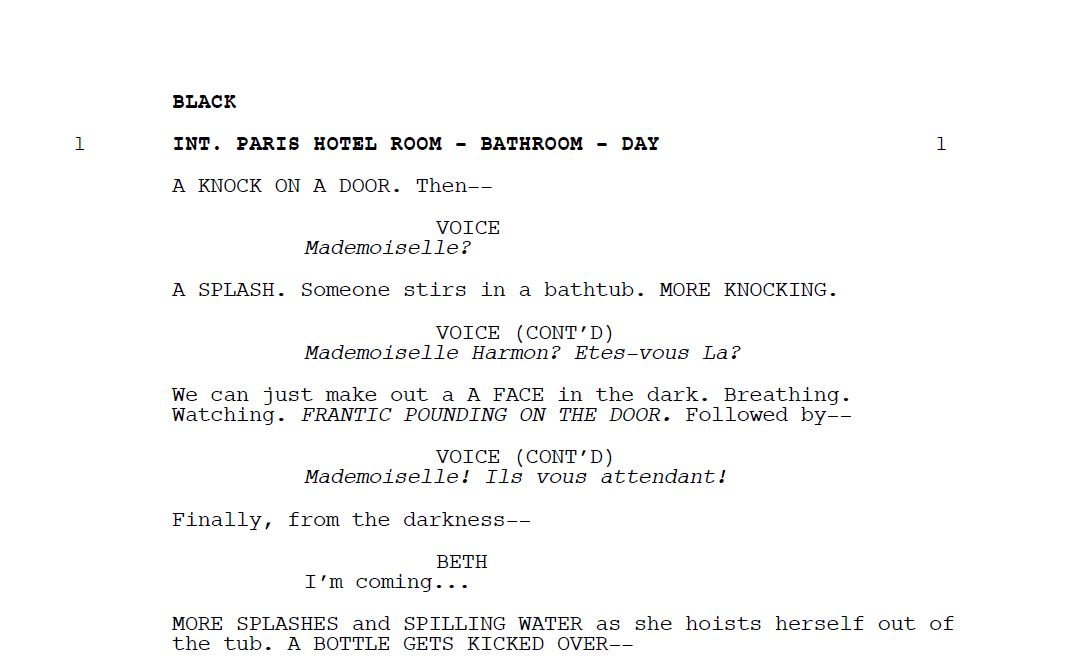 It Starts On The Page

It Starts On The Page: Read Jac Schaeffer’s Pilot Script For ‘WandaVision’

It Starts On The Page: Read The Script For ‘Robin Roberts Presents: Mahalia’