Will it be third time lucky for Jodie Kidd? Former model is set to wed again after ex-Royal Marine proposed on romantic trip to Paris

Model and TV personality Jodie Kidd is to get married for a third time after her ex-Royal Marine boyfriend proposed on a romantic trip to Paris.

‘I said Yes,’ confirmed Miss Kidd, 43, who shared a photograph on Instagram of her with her fiance, Joseph Bates, 35, in front of the Arc de Triomphe in the French capital.

The couple, who have been together since 2017, were congratulated by friends including actress Poppy Delevingne, who described it as the ‘best news’, and Marcella star Anna Friel, who said Bates was a ‘lucky man’.

Miss Kidd, who is the great-grandaughter of Canadian press baron the 1st Lord Beaverbrook, split up from her last husband, David Blakeley, in 2015 after just four months of marriage. 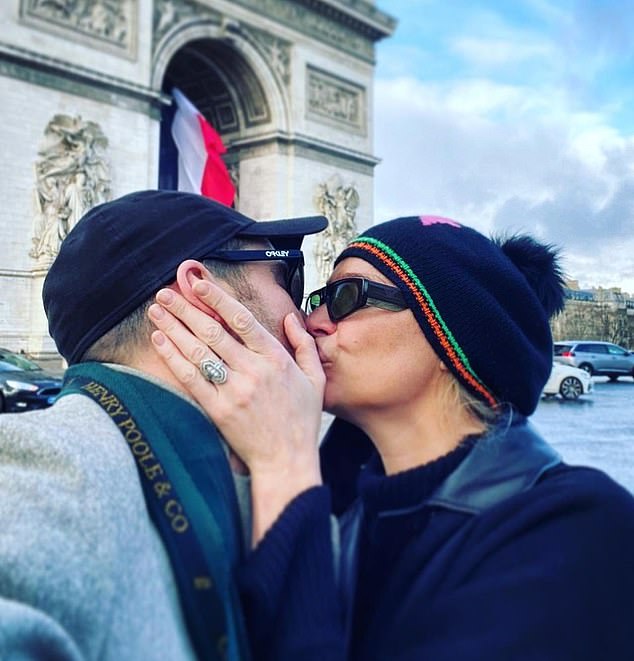 ‘I said Yes,’ confirmed Miss Kidd, 43, who shared a photograph on Instagram of her with her fiance, Joseph Bates, 35, in front of the Arc de Triomphe in the French capital (pictured)

He was reportedly granted a divorce on the grounds of Miss Kidd’s ‘unreasonable behaviour’ after the couple had a whirlwind romance.

She had separated from her first husband, the Internet entrepreneur Aidan Butler, after 18 months.

Miss Kidd, who runs The Half Moon in Kirdford, West Sussex, has a ten-year-old son, Indio, with Argentinian polo player Andrea Vianini.

She has said she ruins trips to other pubs for her fiance, adding: ‘My partner hates going to the pub with me.

‘Even if we’re going as customers, I’ll just be sitting there scanning it and thinking, ‘That person has an empty glass’ or ‘I’ll go and clear up’. I’m a nightmare and constantly on the go.