Ketanji Brown Jackson’s husband Patrick Jackson consoled her with a kiss as her daughter Leila looked on after a day of tough questioning from the GOP Senators.

Ketanji Brown Jackson’s husband Dr. Patrick Johnson planted a sweet kiss on top of her head at the end of Day 3 of her confirmation hearing. Ketanji definitely may have needed some consoling after a day of being grilled by GOP senators. They pushed an agenda of claiming that she’s anti-Trump, insisted on hearing her thoughts on the Kavanaugh hearings and accused her of being too lenient in cases about child pornography. Tense words were exchanged between senators of both parties, leading to an explosive day in court. Ketanji wore her signature sapphire blue color as Patrick wrapped her up in his arms. 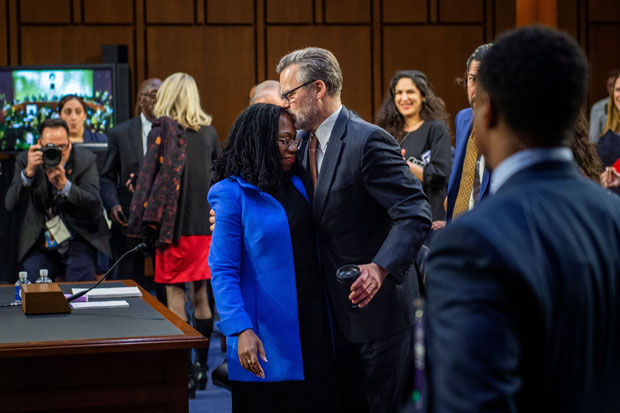 Not only has Patrick provided comfort at the hearing, but he has also served looks. He has been making a subtle yet symbolic fashion statement during her Supreme Court confirmation hearings. Dr. Johnson has been spotted rocking bright-colored socks that have the faces of some of history’s most notorious political figures on each day of her hearing. On Day 1, he showed off bright blue socks with the United States’ third president Thomas Jefferson. Next came a bright green pair of Benjamin Franklin socks for Day 2 followed by an orange pair with John F. Kennedy’s face.

If he completes the set, which can be found here on Amazon, he’ll be wearing a more muted color on Day 4 with Abraham Lincoln’s face on a pair of grey socks. On top of his colorful socks, he has been rocking some top-notch dress shoes that look good on their own but are neutral enough that they give his political socks a chance to shine. 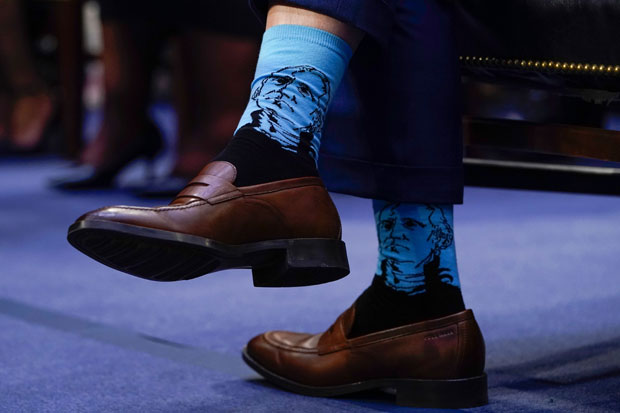 President Joe Biden nominated Ketanji to be a Supreme Court justice and replace Justice Stephen Breyer after he announced his retirement. Not only is she more than qualified for the role but she’ll be making history if she’s confirmed as the first Black woman to be on the Supreme Court. Her husband Patrick has been sitting in her court throughout the hearings and she gave him a shoutout during her big speech.

“I would like to introduce you to my husband of 25 years: Dr. Patrick Jackson,” she said to the courtroom. “I have no doubt that without him by my side from the very beginning of this incredible, professional journey, none of this would have been possible. We met in college more than three decades ago, and since then, he’s been the best husband, father and friend that I could ever imagine. Patrick, I love you.”

Her two daughters, Talia and Leila Jackson were also present for her big speech. Talia wore a floral print dress while Leila rocked a lavender suit as their mother acknowledged the struggles of raising a family and thriving in her career all at once. She also left them an uplifting message stating, “I hope that you have seen that with hard work, determination, and love, it can be done.”