Lil Kim is down to be next up on the Verzuz stage and she already knows who she wants to go up against — Nicki Minaj!

The rapper revealed her choice of a battle partner before the 2021 BET Awards during BET’s Twitter Pre-Show. Her quick answer and zero hesitation sent a wave of excitement throughout the internet, especially considering the two rappers have been connected through a long-standing feud for years.

Kim and Minaj’s issues date back several years, most notably to 2011, when Kim released “Black Friday,” an obvious play on Minaj’s debut album title, Pink Friday, and called Minaj a “Lil’ Kim clone” and a “wannabe.” Minaj’s songs, “Roman’s Revenge,” “Tragedy,” “Y.U. Mad,” “Stupid Hoe” and “I Am Your Leader” are all thought to be about Kim.

BET Awards: Taraji P. Henson Kicks Off the Show by Handing Out Roses

Kim appeared to want to put the drama behind her back in August 2018, after she told ET in June of that year that she “doesn’t know” the other rapper. During a radio interview on Real 92.3, the “No Matter What They Say” rapper said, “God bless [Nicki], I wish her the best. She did what she did, until she’s ready, hopefully, God puts it on her mind to do the right thing because she knows what she did. Once that happens, hopefully everyone will stop asking me.”

Despite both women seemingly being past their rivalry, fans still often compare the rise of the two. With Kim declaring that she’d be open to battling Minaj for a Verzuz, the comparisons have reared their heads once again. Some fans noted that, despite similar looks, Kim and Minaj are from different generations of rap and aren’t suited to battle one another. Foxy Brown, who rose to fame alongside Kim, has been mentioned as a more suitable opponent.

this picture alone clearing lil kim and i don’t wanna hear no back talk 😭 pic.twitter.com/N1WSz4rDgy

lil kim just said she would do a verzuz with nicki…. but why???? foxy brown is right there…

nicki gone show up to the verzuz with lil kim like pic.twitter.com/JSoOIIHyyN

Lil Kim lowkey setting herself up, Nicki got a catalogue with different alter egos in rap & pop. Good luck ma

when lil kim plays this then what? 😹 pic.twitter.com/rqnEKRRlOf

Lil Kim mentioning Nicki name getting more attention than the BET Awards itself.. say the Queen name you could get some ill press💀 pic.twitter.com/jSunTQtPOH

The way Lil’ Kim said “Nicki” is sending me! She’s ready for war! 😂

Lil Kim vs Foxy is only right! Nicki and Kim are in 2 different generations. #AreYouDumb? pic.twitter.com/Vh7NcOEGpx

all jokes to the side though, nicki never denied lil kim’s influence & impact. if you look back, nicki shouted her out in her interviews. she never had an issue with that woman

nicki definitely doing that verzuz for the right price.

Lil Kim and Nicki Minaj coming together for a Versuz will be so MONUMENTAL FOR HIPHOP!

The culture needs it. Honestly. Swizz needs to cut that check for Nicki

On the BET Awards red carpet, Kim opened up to ET about her part in the show’s tribute to Queen Latifah who will be honored with the Lifetime Achievement BET Award.

“Oh my gosh, it means everything. First of all, Latifah paved the way for me and for artists like myself and so she’s like my sister, a friend and everything,” the rapper shared. “She’s always been there for me. She was strong. She was representing Black women the way that Black women are supposed to be represented. Her music spoke for itself, her power spoke for itself and for her to be like the first Black woman in the game to own her own record label and to kind of be a boss and have artists, that was amazing.”

Kim added that Latifah’s success across all platforms, from music to movies and television, makes this award “long overdue.”

The BET Awards is in full swing. See the full list of nominations here, and be sure to keep up with ET’s winner’s list throughout the night.

2021 BET Awards: See All of the Star-Studded Performances! 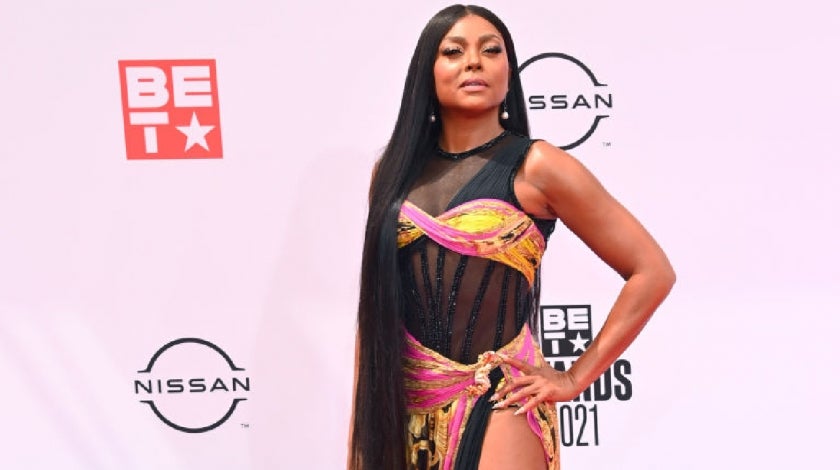