Olivia Wilde enjoyed boyfriend Harry Styles’ opening show on his ‘Love On Tour’ in Las Vegas, NV on Sept. 4 by standing in a secluded section of the arena, where she occasionally waved at fans.

Olivia Wilde, 37, supported Harry Styles, 27, when he kicked off his Love On Tour on Saturday night! The actress, who has been dating the singer since at least Jan., was spotted walking into an area of the MGM Grand Garden Arena in Las Vegas, NV while wearing a stylish pantsuit that included a blazer and flared out pants. She also had her blonde locks down and wore a black face mask as she appeared to be surrounded by crew members. Check out some of the pics HERE.

At one point, when fans spotted her, she seemed to wave at them and pointed to her talented beau when he rocked the stage. He showed off a red outfit under the lights, including a sequined red fringe vest and red pants, and had tons of energy during his epic performance. The show is the start of a months-long tour that will visit much of the United States throughout Nov.

Harry’s show comes just a month after he and Olivia were seen showing off PDA while wearing matching outfits during a lunch outing in Los Angeles. They both wore white T-shirts and jeans and had their arms around each other while walking outside the restaurant. The smiles on their faces while in between conversation proved they were having a great time together and they looked like a couple in love! 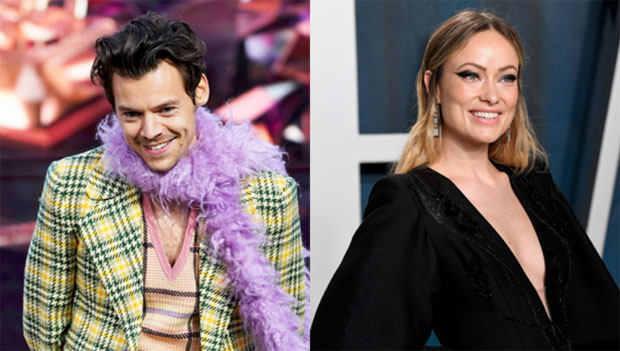 Before that, they were photographed enjoying a romantic getaway in Tuscany, Italy together. They were walking down a street with their arms around each other and didn’t pay much attention to their surroundings. The lovebirds were first spotted holding hands while attending a wedding in fancy attire, including a floral print dress for her and a suit for him, in Jan., shortly after Harry was seen filming on the set of Olivia’s upcoming flick, Don’t Worry Darling, which also stars Florence Pugh.

In June, a source told Entertainment Tonight that Olivia and Harry are happy with their relationship and not concerned with keeping it a secret. “They’ve been going on walks in the park and not hiding their relationship,” the source revealed. “They’ve grown even closer as a couple.”