The daughter of the late ‘Fast and Furious’ actor is all smiles when she shows off her diamond ring while swimming in a pool during a romantic vacation in the desert.

AceShowbiz –Meadow Walker is set to walk down the aisle with her boyfriend Louis Thornton-Allan. Nearly a month after making their relationship Instagram official, the daughter of Paul Walker has gotten engaged to her actor beau.

The 22-year-old beauty announced the exciting news on her Instagram account on Monday, August 9. In her post, the daughter of the late “Fast and Furious” actor shared a video in which she showed off her diamond engagement ring while swimming in a pool. She could be seen holding up her hand in front of her face, flaunting her sparkling bauble and giggling. “<3 <3 <3 <3,” meadow simply captioned it.

Her post has since been flooded with congratulatory messages from her famous friends and fans. “Transformers: Age of Extinction” actress Nicola Peltz could be seen leaving a red heart and a smiling face with heart-shaped eyes emoji. Meanwhile, French singer/songwriter Isabella wrote, “Dying!!!! Congratulations!!!!! [love emojis].” Her soon-to-be husband Louis could also be seen showing his love in the comment section, saying, “Forever and always.”

Louis himself turned to his Instagram Story to share the same video. In the caption, the actor added two blue heart emojis. In separate snaps, he included a photo of his soon-to-be wife sitting outside and holding a cigarette with the ring on her finger as well as a photo from their romantic vacation in the desert. 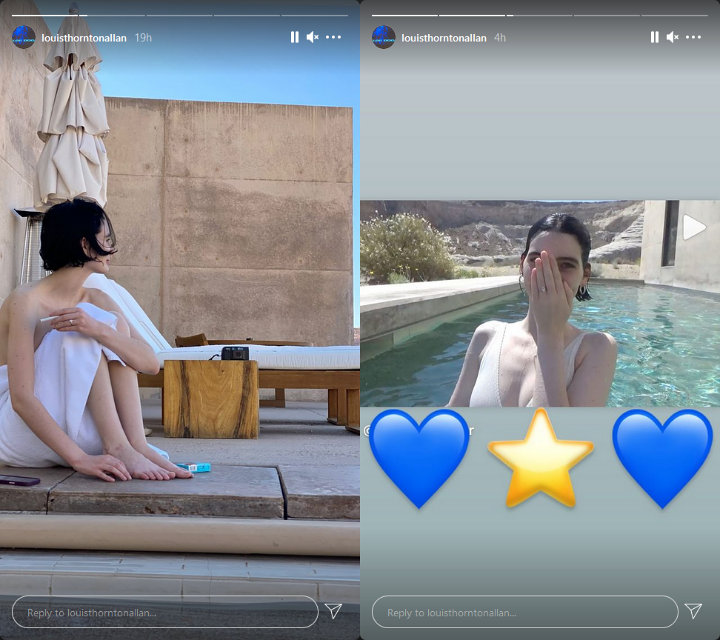 Louis Thornton-Allan shared more glimpse at his romantic vacation with Meadow Walker in the desert.

Meadow’s engagement announcement came just a few weeks after she and Louis confirmed their romance. On July 11, her now-fiancee took to his Instagram page to share an adorable photo of themselves cuddling together on a couch. They also gazed into each other’s eyes and smiled. “Best friend,” the actor captioned the sweet shot.

In the comment section, Meadow commented, “My love.” In the meantime, fans went on gushing over the pair. “Happy for u both,” one comment read. Another fan added, “YOU GUYS ARE ADORABLE OMG!!!” A third echoed, “This is so cute.”

A day after Louis made their relationship Instagram official, Meadow turned to her Story to post a cute video of her and Louis. In the short clip, she could be seen holding the actor’s face. “Hi,” she wrote in the caption.