Over the past couple years, in the age of The Walking Dead and Game of Thrones, killing off major characters has become a go-to narrative device for TV shows looking to subvert their audience’s expectations.

But back in the day when one of the main stars of your show died, it was because of drama behind the scenes. That was doubly true in a show that wasn’t about fighting zombies or dragons but about navigating high school relationships in a rich neighborhood.

So when The O.C. killed off Marissa Cooper — one of the four leads of the show — in a dramatic car crash for the Season 3 finale, it was one of the most shocking moments in TV history.

And yes, the decision was partially motivated by drama behind the scenes.

Creator Josh Schwartz said in a 2017 interview the idea to kill Marissa “was born out of a number of issues: Creative, cast chemistry, ratings.” When asked if Mischa Barton wanted to leave the show, he responded:

“Mischa didn’t want off the show any more than any of the other kids wanted off the show. It was a complicated chemistry with the cast… but she certainly wasn’t actively seeking to leave the show.”

You know who hasn’t ever really talked about it though? Mischa Barton.

It’s been 15 years since the TV moment, and everyone is still wondering. The O.C. has been on a lot of people’s minds lately as it started streaming on HBO Max and a lot of viewers jumped into a rewatch during quarantine. So the star of The Hills: New Beginnings decided to finally open up in a new interview with E! News. She began by explaining her reticence to discuss it over the years, saying:

“I’ve always felt ashamed in a way to really talk about what went on behind the scenes because I’ve always been a very private person and very aware of people’s feelings. Now that we’re living in this era where we do speak out about our experiences and women do come clean about what was really going on behind the scenes and how they were treated, it’s a slightly different thing.”

Whoa… What are we about to hear??

She says conversations about leaving the show started a LOT earlier than we would have expected:

“It’s a bit complicated. It started pretty early on because it had a lot to do with them adding Rachel in last minute as, after the first season, a series regular and evening out everybody’s pay — and sort of general bullying from some of the men on set that kind of felt really s**tty.”

Rachel Bilson began as a guest star and won everyone over so quickly she was almost immediately added as a series regular. We’re talking like halfway through the first season. Was it really that bad for Mischa so early on? We hate to hear that!

Second, what did that have to do with her thinking about leaving? Why would Rachel being promoted affect her so negatively? Schwartz specifically mentioned “a complicated chemistry with the cast.” Is this what he was talking about? And pay equity? What was that? We feel like we aren’t hearing everything there…

Third, and perhaps most importantly, she was facing “bullying” from men on set? That’s awful! Which men?!

She adds that the intensity of such sudden fame was also a major burden:

“But, you know, I also loved the show and had to build up my own walls and ways of getting around dealing with that and the fame that was thrust specifically at me. Just dealing with like the amount of invasion I was having in my personal life, I just felt very unprotected, I guess is the best way to put it.”

“Unprotected.” That’s interesting wording. What was it she wasn’t protected from? Hmm…

Finally, she describes the draining experience of filming 27 episodes that first season — something NO show does these days, much less with a 17-year-old star. She says:

“I was working so hard, the longest hours probably out of all the characters. It wasn’t an easy character for me to play because it wasn’t me…”

OK, so problems went back to the first season. But when did the plan actually begin to form about killing her off?

“So halfway through season two I would say, when we started doubling up on episodes and shooting so much harder, and again a lot of that was too much for me. I didn’t know where the character was going. I look back on it pretty fondly, but there’s stuff I think people did wrong and the way they handled it. So I just didn’t feel I could keep going.”

Mischa says she was given the blessing of the show’s producers to pursue the other offers she was getting. But that meant making a tough choice on a creative level.

“This has been said before, but they kind of gave me an option. The producers were like, ‘Well, do you want your job and to sail off into the sunset and potentially you can come back in the future in some bizarre TV scenario or we can kill your character off and you can go on with your career that you want and what you want to do?’”

For her, pursuing the movie star career she wanted was the priority — so she chose death:

“I was getting offers from big films at the time and having to turn them down. I had always been supporting in The Sixth Sense and any of those things. My dream was to be offered those lead roles, so that’s what happened. It just felt like it was the best thing for me and my health and just in terms of not really feeling protected by my cast and crew at that point.”

Not feeling “protected.” There that is again. Protected from what though??

Mischa wants to make it clear she’s not complaining about having to work hard as an actor. She was an old pro, having acted since she was a child, appearing in many films before she ever became Marissa Cooper, notably Notting Hill and The Sixth Sense. But something was different here. She says:

“Nobody loves their job more than me. For me, acting is a passion and something I genuinely love and it was something that I super enjoy, but also I can always see things for what they are in the business. I was raised with pretty clear vision as to the workings of the industry and the trappings of it and my parents always made that very clear to me. Honestly, 15 years on, I do think it’s sad that there wasn’t a better way that it could’ve been handled.”

While she may still have issues with things behind the scenes, how her onscreen exit turned out — having such an iconic TV death — has become more of a coup for her over the years:

“But I also do really love that she had this epic death and that it ended like that because it’s memorable and it’s not just another flash in the pan. People still come up to me to this day and they’re like, ‘I remember where I was when your character died!’ And they’re still emotional about it, like it was really me. I think that that’s cool that people actually took something away from it. There were lessons to be learned from Marissa, for better or for worse.”

Mischa says what goriness there was in her final moments on the show were somewhat inspired by how insignificant producers made her feel:

“They made me feel like the show is going to go on with or without you and it is what it is. So I was just, like, OK, cool, then let’s go out with a bang. I remember thinking it would be really funny when we were doing the scene after the car crash and, you know, taking the blood the makeup artist and I was just like, ‘Squeeze it all over me!’ I wanted it to be as gory and as bloody as possible. I in no way want to glorify this accident or the ending of this, so I was just like, ‘Go out with a bang!’”

She did that, for sure. Who could forget this moment? 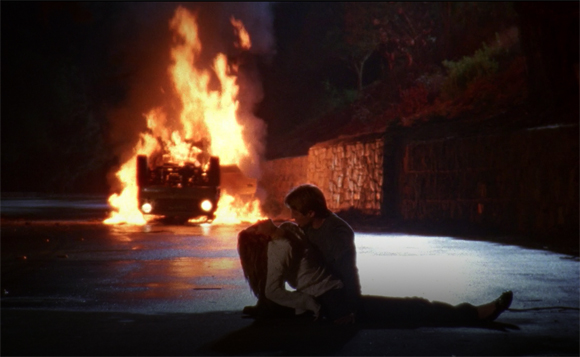 How did she feel about actually leaving? The moment she walked off the set for the last time?

“I was really sad I was going because that was like my family, but there had also been some things that weren’t so cool and I would be lying to say I wasn’t a little bit relieved that I was going to extricate myself from that situation.”

She says when she does see cast or crew from the show, they don’t seem to even remember the not-so-cool moments:

“For whatever reasons, years later, certain people, when they see me from the show they are so excited to see me and they only remember the good times. So it’s a bit of a mixed bag how we all feel about it. I was young, but I was excited to try and get to do new stuff, too, and didn’t know if I could keep handling the stress of that environment that I was put in.”

What stresses specifically though??

“There were people on that set that were very mean to me. It wasn’t, like, the most ideal environment for a young, sensitive girl who’s also been thrust into stardom to have to put up with.”

She won’t go more into it than that — but she does tease that she’s currently working on projects which will allow her to “really talk about” her experience on the hit show.

Damn. Does this change how you see The O.C. and Marissa’s journey on it?