‘She was extraordinary’: Richard Branson pays tribute to mother Eve, 96, after her death from Covid as he says he’s a ‘lucky son’ to have named Virgin Galactic’s mothership after her

Richard Branson has paid touching tribute to his beloved mother Eve, saying she was an ‘extraordinary woman’.

The billionaire, 70, revealed his mum, who gave him £100 to start his business, had died from coronavirus aged 96 on Monday in a heartfelt statement on Twitter.

Speaking about his loss on The One Show on Thursday, Richard gushed that he was a ‘lucky son’ to have been able to name Virgin Galactic’s mothership after her. 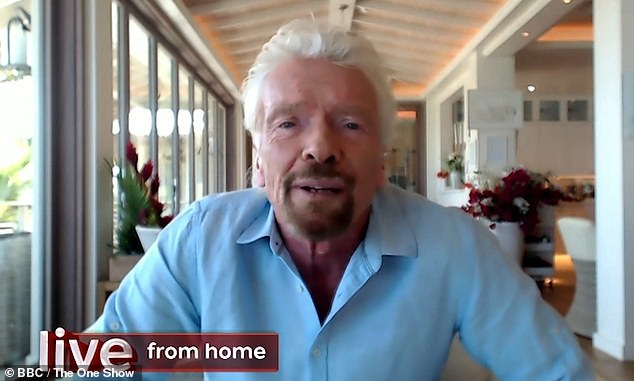 ‘She was extraordinary’: Richard Branson has paid touching tribute to his beloved late mother Eve after her death at 96 during an appearance on The One Show on Thursday

Richard also credited Eve with helping him launch his company Virgin and reflected on her incredible life.

He said: ‘Well, first of all pretty much every family in Britain has been touched by Covid. So our family is no different from any other.

‘She was an extraordinary woman like most mums are. I owe Virgin to her, we didn’t have any money. One day she found a necklace in Guildford high street.

‘She took it to police and three months later given it back. She sold it for £100 and gave the money to me, I was 16 at the time. 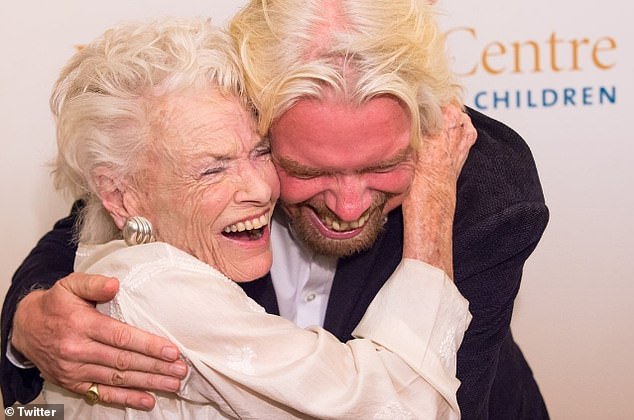 Family bond: The billionaire, 70, credited Eve with helping him launch his company Virgin and said he was ‘lucky’ to have been able to name the mothership Virgin Galactic after her

‘She was an extraordinary lady. In the second World War she dressed up as a man to become a glider pilot. She got away for it for a few months despite being a very attractive glider pilot.’

When presenter Alex Jones asked what his mum thought about his business, Richard replied: ‘I think she was proud. The mothership Virgin Galactic will be taking people to space, and myself, in a few months time.

‘She was proud but we were even more proud of her she set up foundations in Morocco. She was teaching people to learn crafts… I’m lucky, she was extraordinary.’ 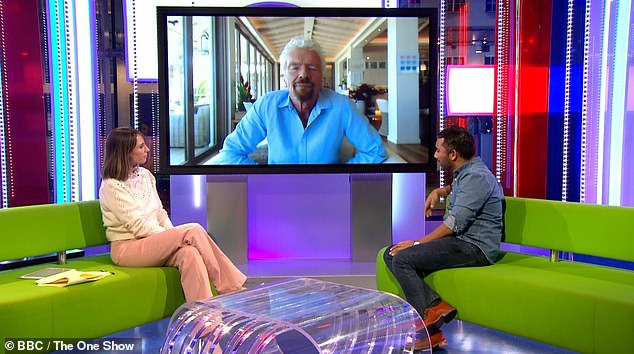 Touching: When asked if Eve was proud of his business’ success, Richard said he thinks she was but that the family were ‘even more proud of her’

The first WhiteKnightTwo, called VMS Eve, was launched in 2008 and has completed an extensive test flight program, according to Virgin’s website.

News of Eve’s death was announced on Monday, with her last seen in a Christmas Eve video filmed at her daughter Vanessa’s house in West Sussex where she spoke enthusiastically about her love of Bell’s whisky.

Richard revealed his mother’s death on Twitter, and wrote in a post: ‘I’m sorry to share that, sadly like a lot of people’s mums and dads right now in these days of Covid, my mum Eve has also passed away.

‘Rather than mourn her loss, I wanted to celebrate her wonderful life & the joy she brought to so many.’

Eve died in the UK with her granddaughter Holly saying she passed away on Friday. 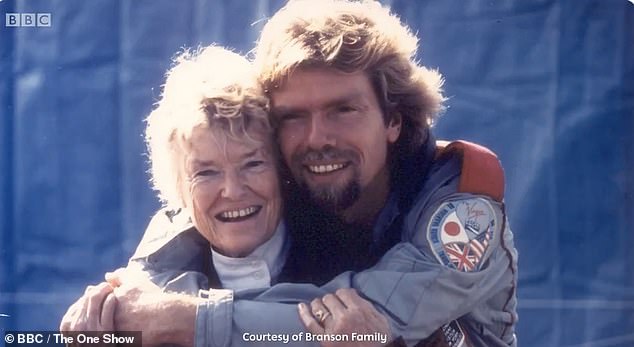 Richard said: ‘It’s [the spaceship] called Eve after her. I’m lucky to be a son who can take his mum to such an event and unveil it and let her see that the mothership is named Eve after her’ 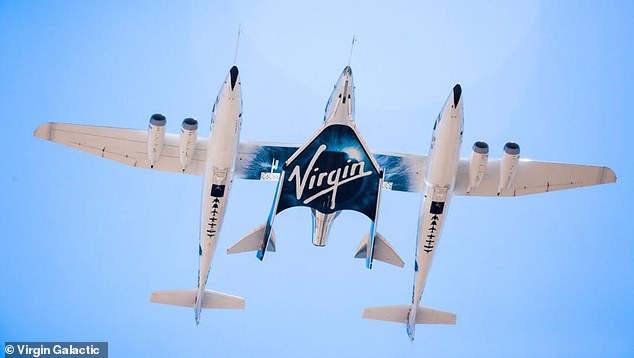 Tribute: The first WhiteKnightTwo, called VMS Eve, was launched in 2008 and has completed an extensive test flight program

It is not clear if she was living with her family or had been taken to hospital, though Richard, who is believed to be on his private Necker Island in the British Virgin Islands, suggested she had been due to get a vaccine the day after she tested positive three weeks ago. She had previously been living in Fulham in her later years.

He added that his sister Vanessa and nephew Louis stayed by her side before her death and she entertained them  and her nurses with ‘tales from her life and much laughter over glasses of whisky’.

Holly led tributes from younger members of the Branson family- and revealed that many of Eve’s grandchildren spoke to her on the phone and said their ‘final goodbyes’ in the hours before she died.

Eve, who had been battling vascular dementia, had three children, 11 grandchildren and 10 great-grandchildren. Her husband Ted died in 2011.

Loss: Richard revealed his mum had died on Monday in a heartfelt statement shared to Twitter 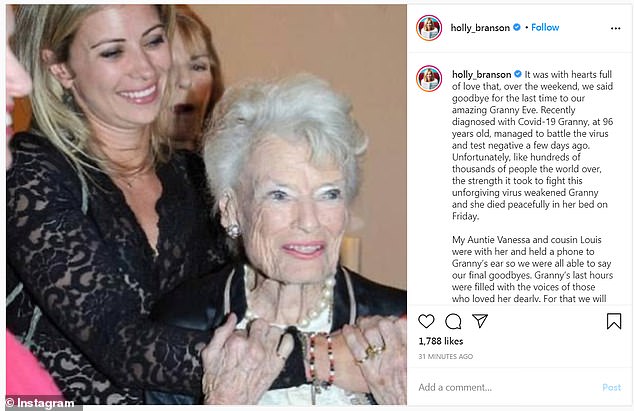 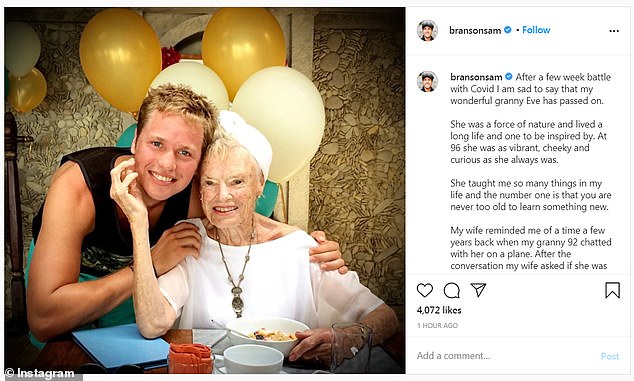 Holly wrote: ‘Granny managed to battle the virus and test negative a few days ago. Unfortunately, like hundreds of thousands of people the world over, the strength it took to fight this unforgiving virus weakened Granny and she died peacefully in her bed on Friday. ⁣ ⁣

‘My Auntie Vanessa and cousin Louis were with her and held a phone to Granny’s ear so we were all able to say our final goodbyes. Granny’s last hours were filled with the voices of those who loved her dearly. For that we will be forever grateful.’.

She added: ‘I’ll never forget what it felt like as a child to be enveloped in her unwavering faith in us.

‘No matter the challenges we set, her beautiful blue eyes shone with the belief that we could achieve anything we put our minds too. For her 10 great-grandchildren, and those yet to come, I know Granny will become a family legend’. 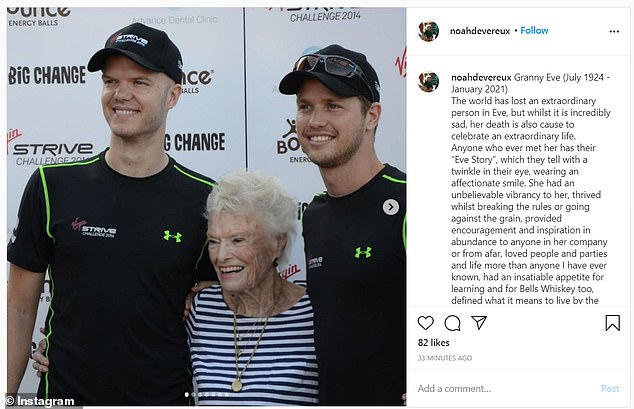 RIP: Eve, who had been battling vascular dementia, had three children, 11 grandchildren and 10 great-grandchildren

Eve previously hit the headlines in 2014 when she dismissed reports she had been rescued from a fire on her son’s private Necker island in the Caribbean by Titanic star Kate Winslet.

In August 2011 it was widely reported that Kate had rescued Eve as she tottered down stairs at Necker Island, picking her up in her arms and carrying her to safety, after a lightning storm caused a huge blaze.

But, in an interview, Eve later dismissed the heroic act, saying that Kate only carried her down four steps and ‘that was it’.

Eve, a former ballet dancer, was described as ‘fierce’ by her son and interviews in her latter years suggested she wasn’t slowing down in old age.

Her husband Ted died in his sleep in 2011 and in an interview four years later, she said still had male companions who were up to 40 years her junior.

Eve was avid croquet player and also played tennis and golf in her latter years. She also shared her tips for old age and said: ‘Keep busy and have enough interests to keep you busy.’

Eve also advised ‘keeping the lipstick going’ and credited a vodka cocktail and a nightly tot or two, ‘occasionally three’, of whisky, with helping her to maintain her youthful vigour.

She toured Germany as a ballet dancer after the war, acted on the West End stage and worked as an air hostess on the treacherous British South American Airways routes. 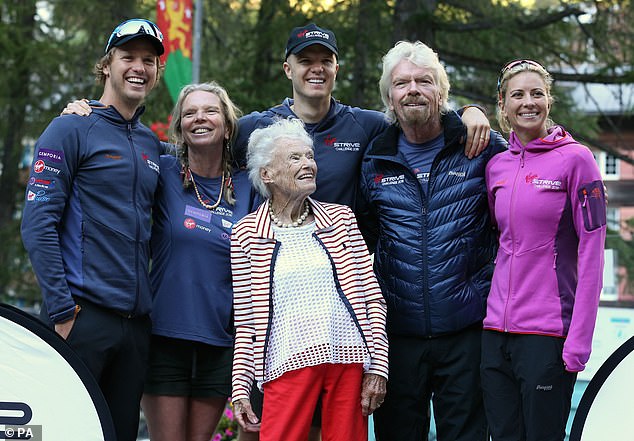 What a life: Eve was a ballet dancer and air hostess during her life (pictured with her son Richard and daughter Vanessa as well as the businessman’s children Sam and Holly)