“It’s amazing that you’re able to still continue the support and the care that you would normally provide even under these difficult circumstances,” the Duchess of Cambridge, 38, told a handful of nurses in the touching video compilation shared to the Kensington Palace Instagram on Tuesday, May 12.

Her husband, 37, appeared in a separate clip, thanking a group of nurses in the U.K. for the “terrific job” they’ve been doing amid the global coronavirus outbreak. “I hope you know how appreciated everyone is,” he added thoughtfully.

🌎 From The Queen and The Royal Family this #InternationalNursesDay: Thank you

While Queen Elizabeth II didn’t show her face on video, the 94-year-old monarch’s voice was featured prominently at the beginning of the tribute. “This is rather an important day,” she said on a phone call with a local nurse. “[Nurses] have obviously had a very important part to play recently.”

Princess Anne and the queen’s daughter-in-law, Countess Sophie, reached out to essential workers from Sierra Leone, Australia, Tanzania, Cyprus, Malawi, India and the Bahamas, who each spoke to how the pandemic has impacted their home countries in different ways. The five-minute video also featured Duchess Camilla and Prince Charles, who recovered from his own battle with COVID-19 in April.

“On this International Nurses Day, my family and I want to join in the chorus of thank yous to nursing and midwifery staff all over the country and indeed the world,” the Prince of Wales, 71, added, expressing gratitude to those who helped him on his path to recovery.

The royal family has been highly involved in a number of public efforts during the worldwide health crisis, performing virtual opening ceremonies of state-of-the-art health centers and developing new initiatives to support their local communities. Though Prince Harry and Meghan Markle gave up their responsibilities as senior royals earlier this year, they’ve been making a difference in their own way from their new home in Los Angeles. 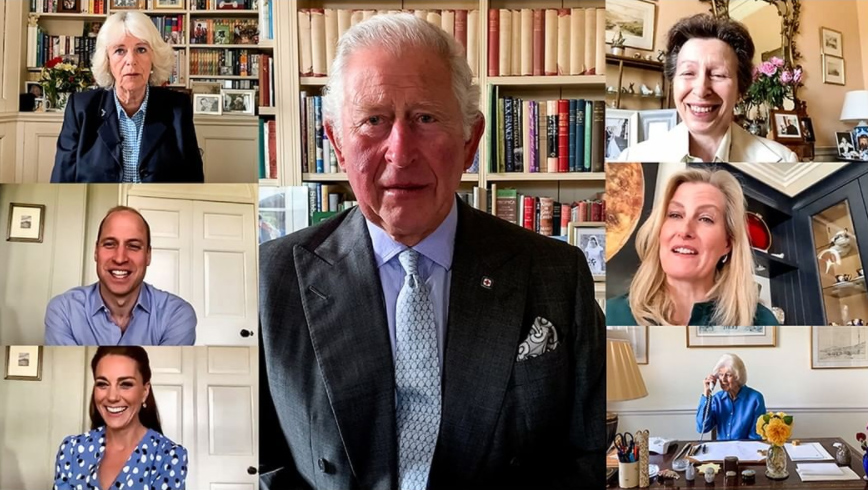 “I remember meeting so many incredible people and hearing your stories — stories of strength, of determination, of resilience but ultimately of courage,” Harry, 35, told members of the OnSide’s Youth Zones organization during a virtual address on Sunday, May 10. “I can only imagine the last six weeks have made it even more challenging. This too shall pass.”

Throughout these challenging times, Harry and the former Suits star, 38, have been dedicated to changing people’s lives “for the better.” The pair were spotted teaming up with Project Food Angel in April and delivering meals to those in need in the West Hollywood area.

“Harry and Meghan’s No. 1 priority right now is helping those affected by the virus, especially the vulnerable,” an insider later told Us Weekly exclusively. “Harry says moving to L.A. has been liberating.”