What Bill Cosby Just Said About His Wife

Bill Cosby, who was sentenced to prison for sexual assault and then released from prison when his conviction was overturned thanks to a legal technicality, is back to living the good life. Apparently. The once-beloved actor just celebrated his 84th birthday at home with his wife, Camille, and, according to statements he gave to the Daily Mail, is feeling great. And one comment, in particular, has us raising our eyebrows, to say the least.

Cosby, who has confessed to drugging women with quaaludes in order to have sex with them and who has been accused of sexual assault by no fewer than 60 women, was granted his release by the Pennsylvania Supreme Court on the grounds that he did not receive a fair trial. He argued that he gave his confession on the understanding that he would not be criminally charged, via The New York Times.

You’d be forgiven for thinking that he and his wife wouldn’t be in the greatest of places right now, all things considered, but it looks like they’re doing great. Here’s what he said.

Bill Cosby's comments about his wife are eyebrow-raising 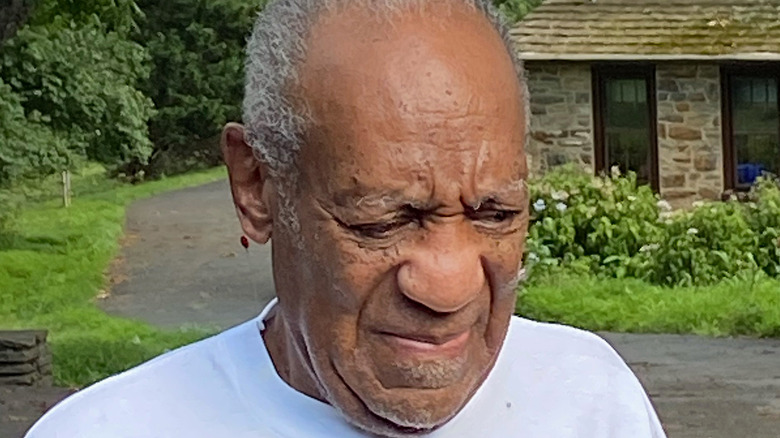 Speaking to the Daily Mail about his birthday dinner and reunion with wife Camille, Bill Cosby said, “In the words of James Brown, It’s a man’s world but it wouldn’t be nothing without…Mrs. Camille Cosby.” Cosby also informed the outlet that he got a fresh new haircut just for his birthday dinner. The Mail also reported that Camille seemed extremely happy and was seen smiling broadly and laughing at her New York City townhouse.

Now look, we’ve absolutely got nothing against James Brown. In any other context this might seem like a sweet comment. But coming from a man accused and convicted of sexual assault? In the words of Ariana Grande, “Thank you, next.” Readers of the article roasted the story, lambasting it as “disgusting” and “glorifying a predator” in the comments section. Another referred to Cosby as a “sleaze bag” who “should’ve stayed in jail.”

Now that he’s free again, Cosby is also planning a comeback tour, though it doesn’t look like there are any specific details to report just yet. Maybe James Brown was right about it being a man’s world after all, then.

If you or anyone you know has been a victim of sexual assault, help is available. Visit the Rape, Abuse & Incest National Network website or contact RAINN’s National Helpline at 1-800-656-HOPE (4673).