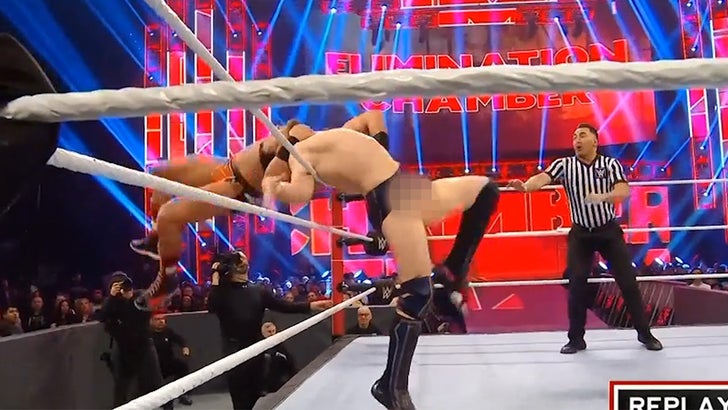 Did Daniel Bryan‘s clankers fall out of his outfit during his WWE match Sunday???

The wrestling superstar wore his usual skin-tight briefs for his brawl with Drew Gulak at Elimination Chamber in Philadelphia, Penn. … and it didn’t take long for things to get hairy.

Early in the match, Bryan went to suplex Gulak over the ropes … but when Drew grabbed onto Daniel’s briefs on his way over — it exposed a whole lot of Bryan.

Later in the match, an almost identical situation happened … with Dulak revealing Bryan’s junk once again when he grabbed onto the wrestler’s briefs on a throw from the top turnbuckle.

Of course, Bryan didn’t seem too bothered by the accidental exposure … he went on to beat Dulak with his famous “Yes Lock.”

Daniel hasn’t commented on the wardrobe malfunction, and it’s unclear if it was never pointed out to him that the family jewels were exposed live on Pay-per-view!