Photographer David Altrath grew up in Datteln, Germany, and has been interested in architecture ever since he was a teenager. 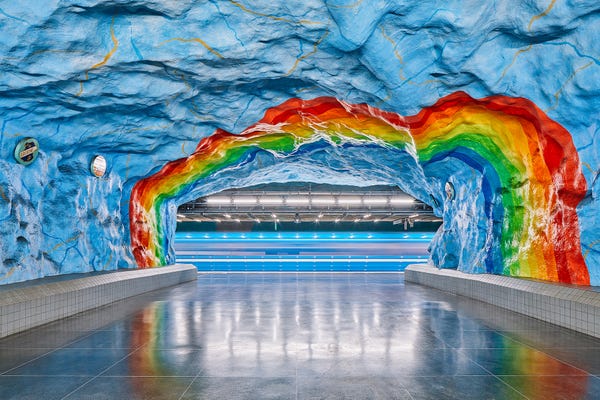 His photo series, "Metro," captures the intricate artwork and designs of the underground metro stations in Stockholm, Sweden. 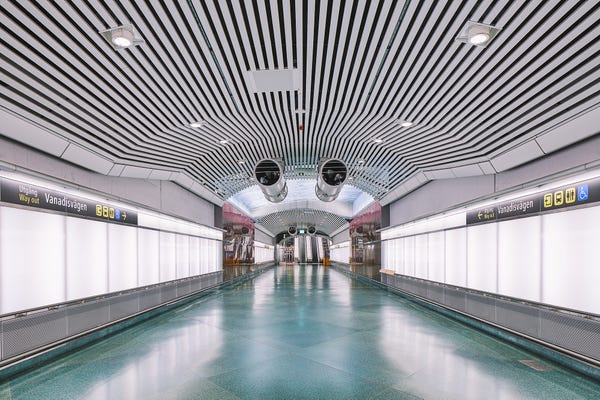 Altrath said he became fascinated with reading about the underground stations after hearing that it was often referred to as "the world's longest art exhibition." 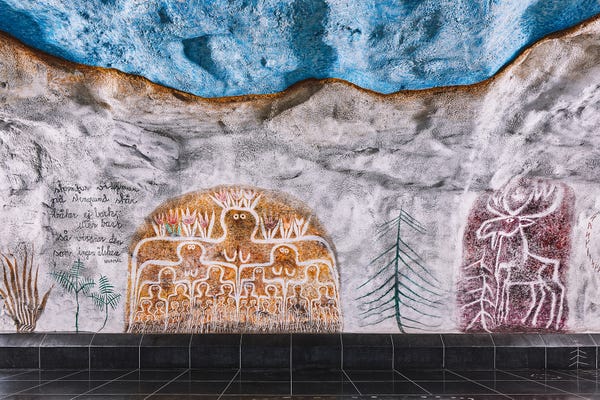 The photographer wanted to see for himself if the subway system lived up to its name. 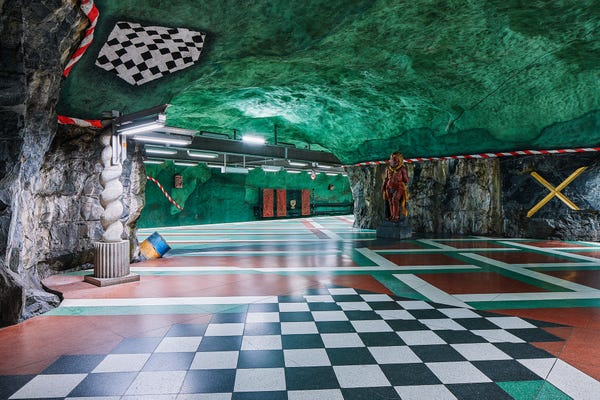 "The thought of experiencing this somewhat different art exhibition intrigued me," Altrath said. "It became clear to me that I had to pay a visit to the Stockholm metro." 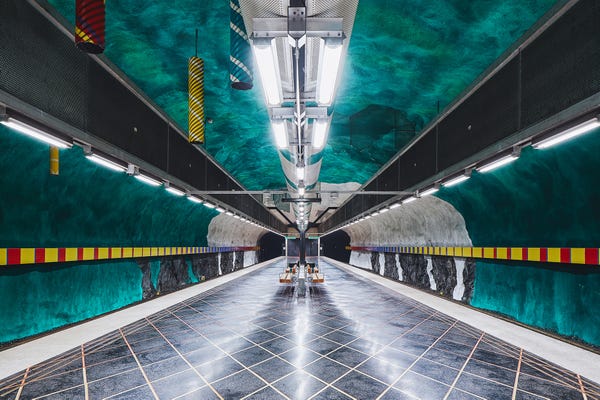 During a several-week-long trip from Hamburg, Germany, to Sweden, Altrath decided to set aside time to document Stockholm's metro stations. 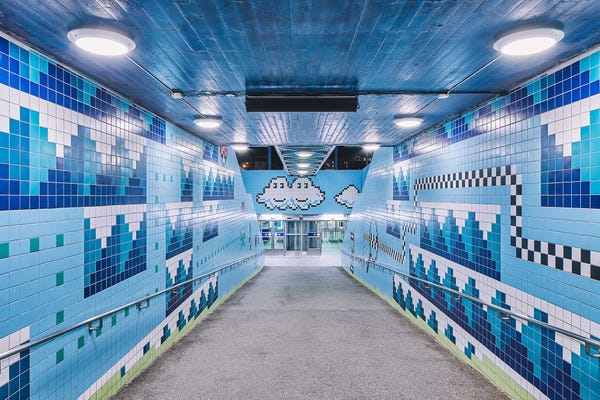 "For two nights, I roamed the empty stations, which are otherwise way too crowded, to capture all their beauty and atmosphere," Altrath said. 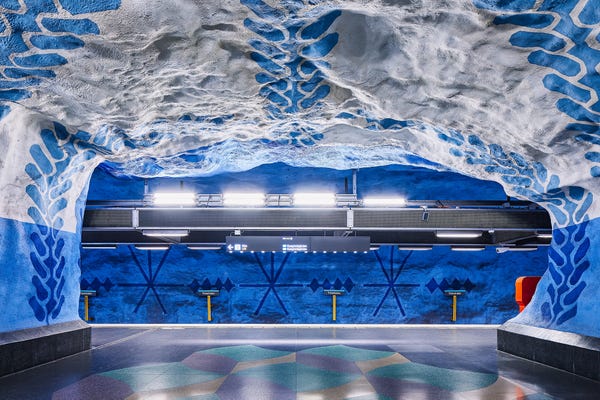 His images show the vibrant colors and cave-like structures of the underground system. 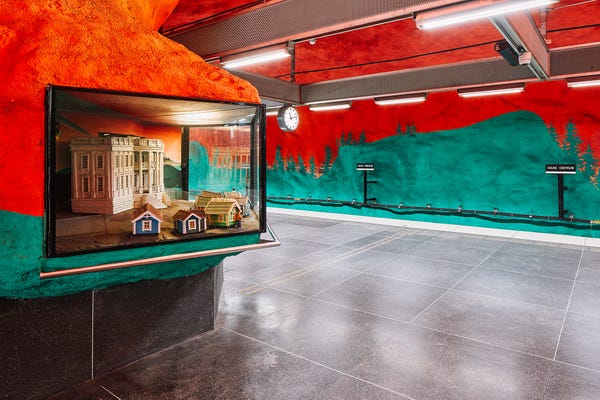 There are 100 stations in Stockholm, and each one features unique designs and art installations. 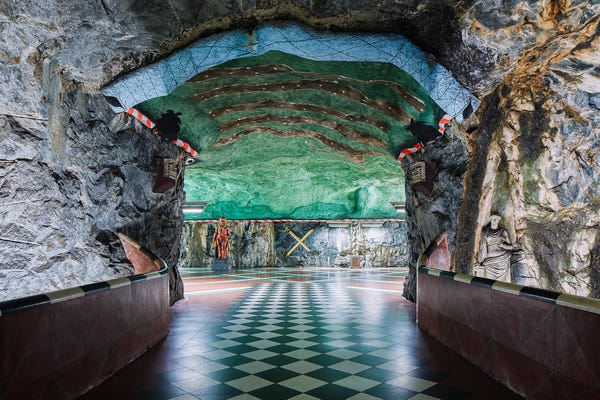 More than 100 artists have contributed to the Stockholm metro since first being invited to decorate the stations in 1957. 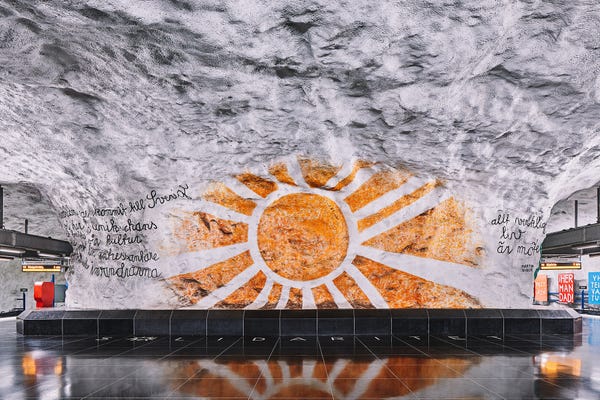 While talking to locals during his project, Altrath said that he "got a sense of the local population's pride for their well-kept and beautiful metro." 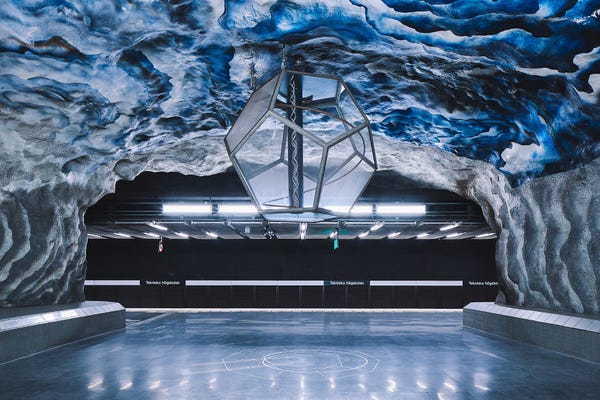 "One gets the feeling that the stops are strongly respected, and that their design has a calming effect on the commuters," he added. "Everything seems like it runs in an orderly fashion." 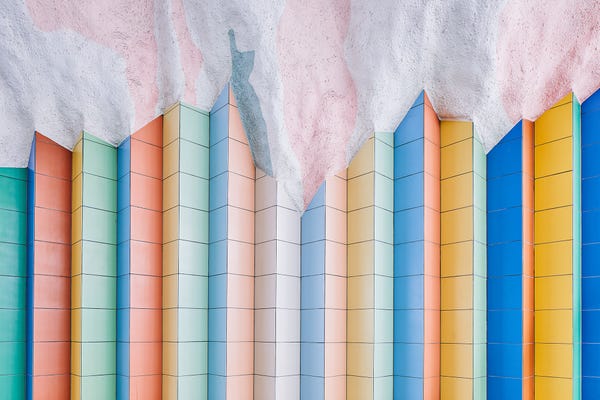 The photographer thinks that the monotonous architecture of most subways "often seems depressing," and that the Stockholm stations, in contrast, provide a more pleasant traveling experience. 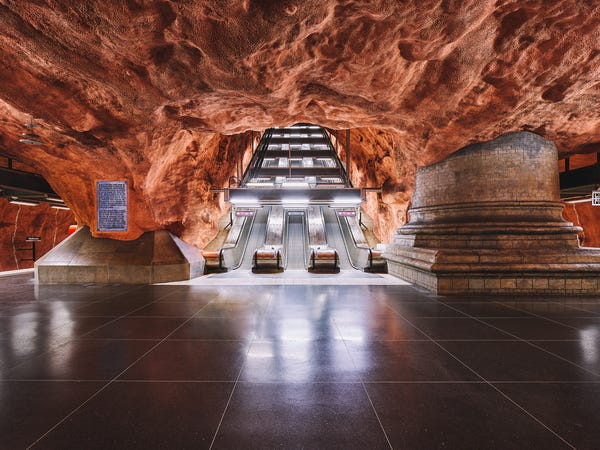 "The Stockholm metro invites you to pause, let your gaze wander, and discover each and every detail," Altrath said. 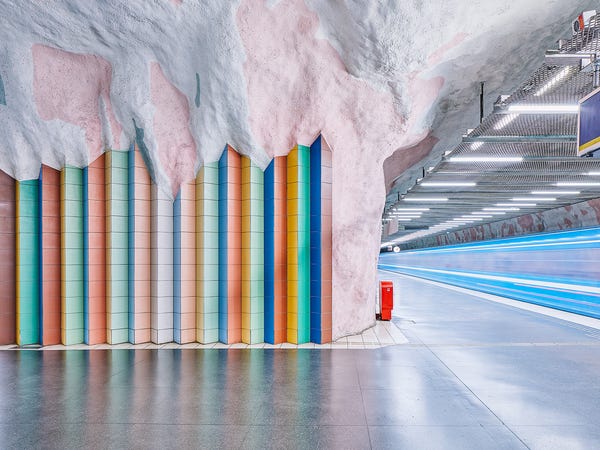 "It's one of the cleanest metros I have ever seen," he added. "The artworks are not alienated or besmirched by graffiti." 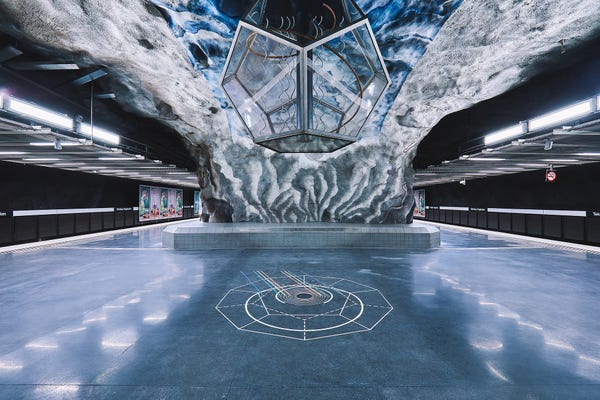 Before working on this project, Altrath was traveling through several underground stations across Europe, including Hamburg, London, and Paris. 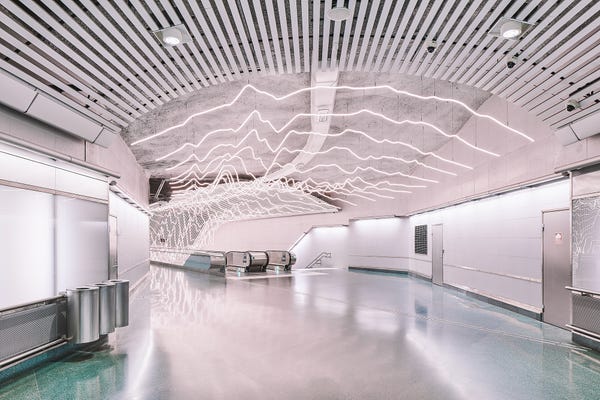 Although he found the other stations to be impressive, he said that the Stockholm subway system is his favorite because of the diverse number of art installations and color variations. 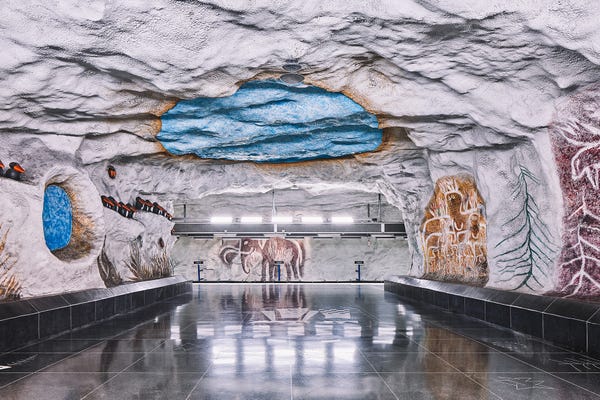 "The contrast between the rough tunnels and the finely crafted art makes the metro network the most beautiful and admirable underground system," Altrath said. 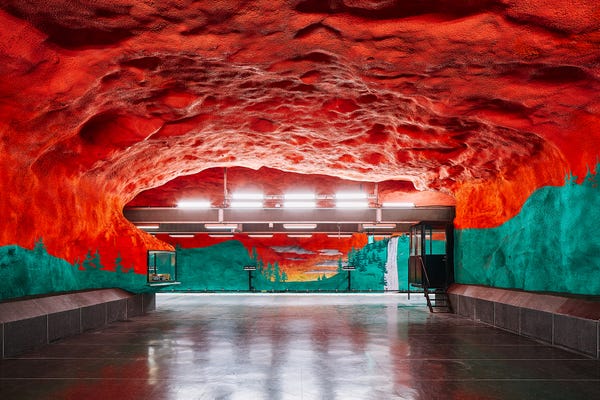 According to Altrath, the metro "more than lives up to its reputation of being the longest art exhibition in the world." 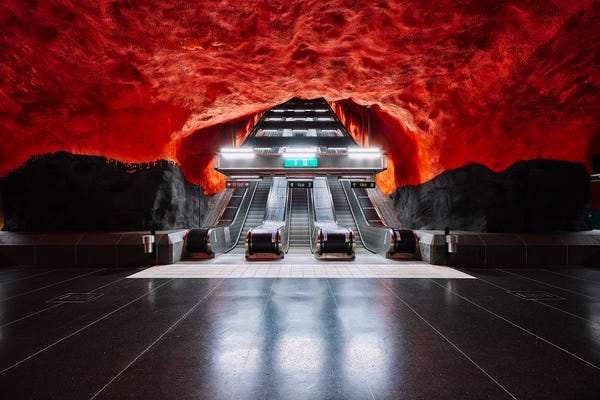 The photographer told Insider that his photos have been met with a positive response, and have even inspired people to want to travel to Stockholm to see the stations. 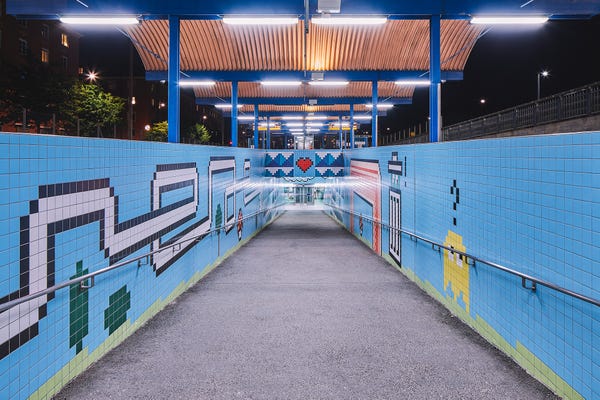 "Finding yourself in a charming environment while waiting for the next train doesn't seem so bad, as there is so much to discover if you look closely at the designs," he said. 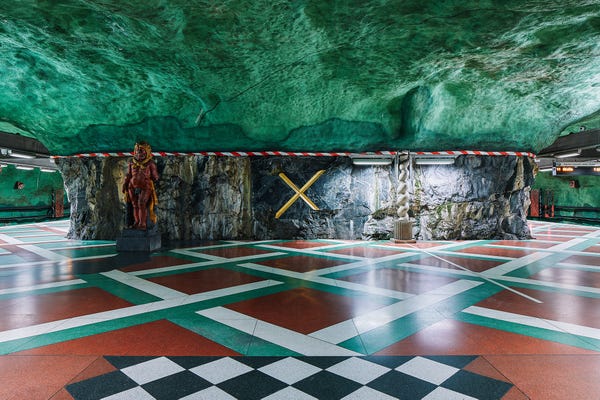 As far as plans for a new project, Altrath said he is going to photograph Russia's metro stations next. 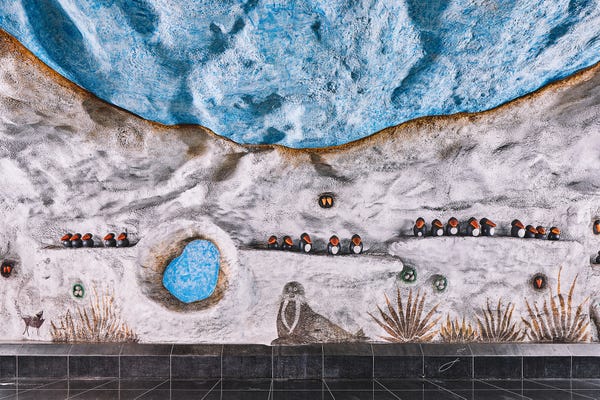 You can view the entire "METRO" collection on Altrath's website.