Diamonds coach Lisa Alexander has walked away from the game she helped cement as a major player on Australia's sporting landscape after coaching the national side for the final time.

There were emotional scenes at the end of Sunday's bushfire charity game, with Caitlin Thwaites reduced to tears afterwards while talking about Alexander's exit after eight years at the helm. 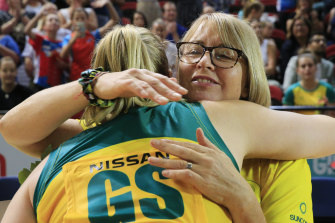 "She is a really special lady, and I get emotional even thinking about it. She has done so much for each individual but also for the sport," Thwaites said. "I don't think we've seen the last of her. She has taken our sport to an entire new level. The world of netball has benefited from her being in that position."

Alexander's contract was not renewed after the Diamonds lost the World Cup final 52-51 to New Zealand last July, which came after they fell to England at the 2018 Commonwealth Games by the same scoreline.

Alexander said any of the Super Netball coaches were qualified to take the reins – but but advised her successor to run their own show and be true to themselves.

"They do need to understand the extra responsibility you have when you're a national coach," Alexander said. "It's not just about technical and tactical coaching; you've got to be a spiritual leader of your country's netball and hopefully I've done that."

With Alexander's Diamonds dominating 66-53 over the Super Netball All-Stars at Qudos Bank Arena, questions were asked again about why Alexander was dumped from the post.

"I don't think that the players had lost faith in her," Thwaites said. "We pride ourselves at being the absolute best and we've lost two of the major benchmark events – but in saying that, they were by one goal."

Alexander retires with an 81 per cent win rate, but her record was just one part of why she was held in such high regard as a coach.

The game also marked Thwaites' final appearance for the Diamonds. She announced her retirement late last year after thriving under the leadership of Alexander after making her national debut in 2012.

Thwaites was warmly welcomed by the crowd of 11,067, who cheered every time she touched the ball.

"This one for me was bonus time," she said. "For me, it was about getting out there and enjoying it, it is not every day you get to wear this dress."

The match gave fans a taste of the rolling substitutions which will be a feature of the game for this year's Super Netball Season. The charity match also included a 'Super Shot' which gave two points for shooting from the outer portion of the goal circle.

The Diamonds took the lead early, with the starting combination of Caitlin Bassett and Courtney Bruce pushing the score to 21-13 after the first quarter. By half-time, both sides had gotten the hang of the Super Shot and pushed the score to 42-24.

Giants star Jo Harten showed why she was announced as her club's captain for 2020, but her second-half energy was not enough to beat the Diamonds, who refused to let their long-standing coach go out with a loss.