ANNA MIKHAILOVA: Seconds out… now for a round of Labour cronyism

ANNA MIKHAILOVA: Seconds out… now for a round of Labour cronyism

Let’s get ready to rumble. I’m ringside at a Labour cronyism row involving, in the red corner, Chris Evans, the Shadow Defence Minister and chairman of the Boxing All-Party Parliamentary Group (APPG).

A nice result for Murray Stewart, who boasts to prospective clients that he’s a ‘specialist in policy influencing and parliamentary engagement’. 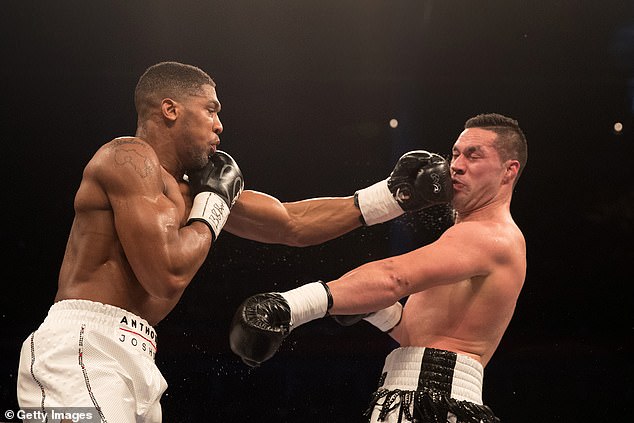 Let’s get ready to rumble. I’m ringside at a Labour cronyism row involving, in the red corner, Chris Evans, the Shadow Defence Minister and chairman of the Boxing All-Party Parliamentary Group (APPG). Anthony Joshua and Joseph Parker are pictured in the ring

Only the pair were business partners at the time of the appointment, having co-founded Start Sports Management in 2020, during lockdown. Evans was a director and equal shareholder when Stewart started working for the APPG on August 1, 2021.

Evans, MP for Islwyn, the Welsh seat previously held by Neil Kinnock, later resigned as a director, but gave up his shares only last month. Stewart continues to provide secretariat support to the Boxing APPG and two others.

Readers will be familiar with the wild west of APPGs – informal groups that can appear like parliamentary committees.

The Standards Committee is conducting an inquiry into the groups, which have swelled in number from 560 to 755 in five years.

‘It feels as if every MP wants their own APPG and every lobbying company sees an APPG as an ideal way of making a quick buck out of a trade industry body,’ said fellow Welsh Labour MP and committee chair Chris Bryant last week.

Evans is being investigated by Parliament’s Standards Commissioner after Stewart’s firm failed to disclose its clients to blogger Dr Alex May, required by APPG rules.

Stewart used to be a staffer for Tony Blair and worked for Labour’s infamous Rapid Rebuttal Unit to neutralise negative stories.

He set up Stewart Public Affairs (SPA) in 2019 after working for the Boxing APPG’s previous secretariat, TFA, who ‘secured support’ from promoters Matchroom Sports and bookies Ladbrokes and William Hill. The latter gifted Evans tickets worth £600 to watch Anthony Joshua’s title clash in Cardiff.

Stewart told me there is ‘no link whatsoever’ between SPA and Start Sports Management. Well, apart from Evans being his former business partner and shareholder, SPA also acts for the British Board of Boxing Control, which Evans has been a director of since April 2018.

Last night, Stewart denied his connection to Evans helped secure the board as a client.

Evans’s biography of Freddie Mills, the mob-connected British light heavyweight champ who died in mysterious circumstances, was lauded by promoter Frank Warren and launched at the Commons with rival Barry Hearn giving a speech.

I asked Evans why he appointed his business partner’s company to run his APPG and whether he declared their links. Sadly, the MP and boxing’s man in Parliament did not respond when the bell rang.

Not every decision in the mini-reshuffle was about rewarding Boris Party-gate loyalists. After run-ins with Defence Secretary Ben Wallace, parliamentary aide James Sunderland was manoeuvred out of the Ministry of Defence. The former Army colonel apparently had trouble taking orders from Wallace, a mere captain in the Scots Guards. A source said: ‘Other than making Wallace an honorary general, it was hard to find a way round it.’ Sunderland now commands sheep at the Department for Environment, Food and Rural Affairs.