A Florida art teacher accidentally created ‘Frankenstein’s cat’ when she tried out feline taxidermy for the first time – leaving the kitty with a ‘terrifying’ grin and a ‘hotdog’ body that saw the animal’s frame stretched to twice its ordinary size.

Jennifer Clark, from Citrus County, told people on social media that she had wanted to step up her art skills when she brought a tabby she found dead at the roadside home to work on, but the month-long process became more complicated than she first anticipated – and she ended up with the kind of shocking exhibit you might find in a bad taxidermy museum.

Her post on Facebook went viral and has been liked, commented on and shared more than 20,000 times, with many mocking her project.

On TikTok, she’s faced negative reactions with one user saying: ‘For the love of god let the animal rest in peace.’ 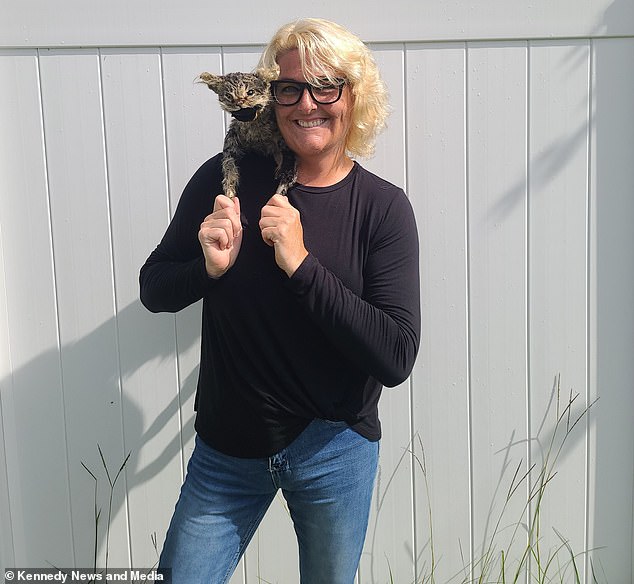 Jennifer Clark, from Citrus County, Florida, decided to try taxidermy on a tabby cat she found dead by the roadside – however, her first attempt at the macabre art didn’t go well 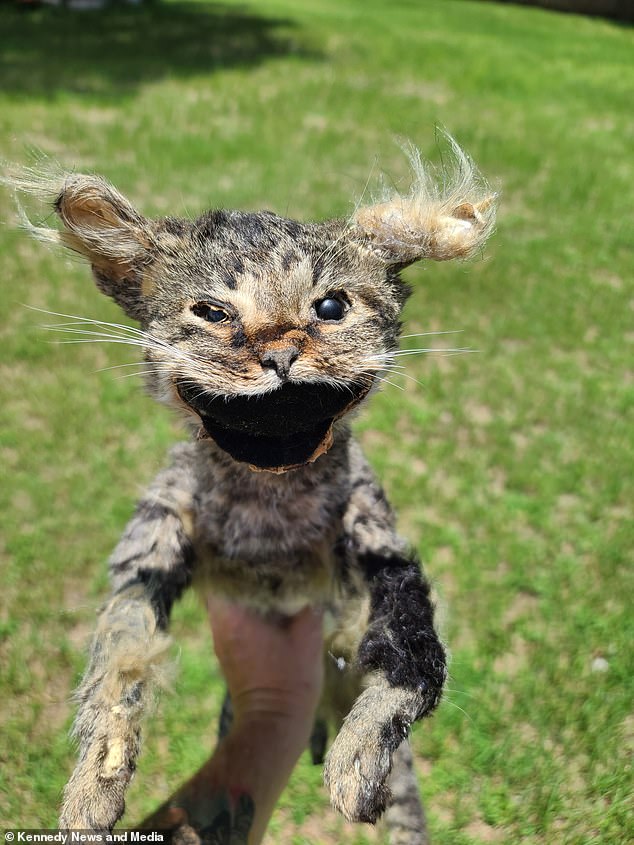 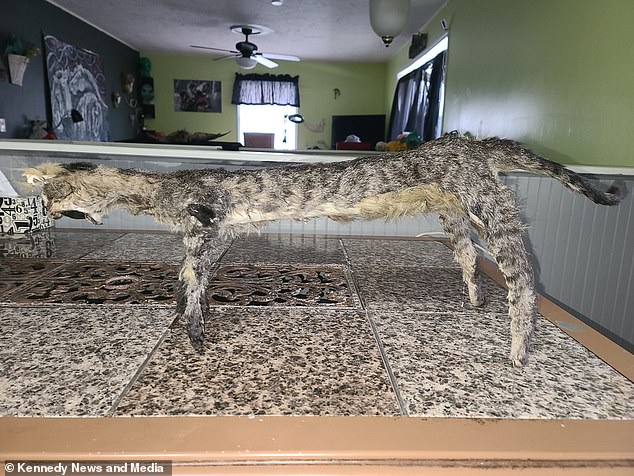 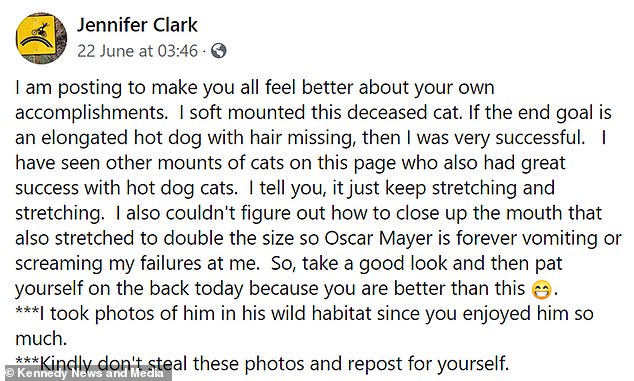 A strong of photos show Oscar’s gaping, felt-stuffed mouth as it ‘sits’ in the garden, while in another snap the bizarre creation lies along a tree branch.

The mum of one admits her project is ‘scary’ despite her best intentions, but it hasn’t stopped her from it having pride of place on front windowsill for the last seven months since completing it in December 2020.

Jennifer said: ‘When it was finished I thought. ‘Oh good lord, do I ever want anyone to see this?’

‘Sometimes you want to preserve your animals but if you bring a cat back from the dead you might get something like the Pet Cemetery movie or Frankenstein’s cat, and this is like that.

‘He was unclaimed and unwanted so I wanted to give him a second chance to have a family, but I’m not very skilled because I’ve just started so he didn’t turn out very well.

‘There’s not a lot of videos of taxidermy because they don’t put it on the internet, so I was just going in blind. A lot of the time I was improvising and learning as I went along.

‘I did watch a video on what you’re supposed to do, but it was really difficult so I just did the best I could.’

The elementary school teacher scooped out Oscar’s internal organs, turned the kitty inside out, salted him, then washed it off as per the online instructions. 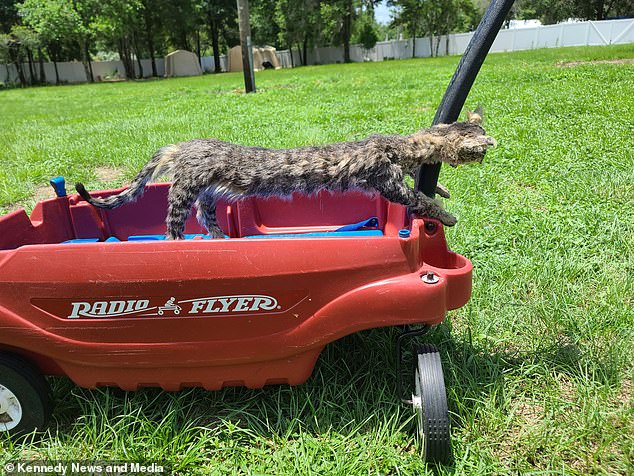 Clark, an art teacher, shared a large amount of photos of the deceased cat in a variety of poses 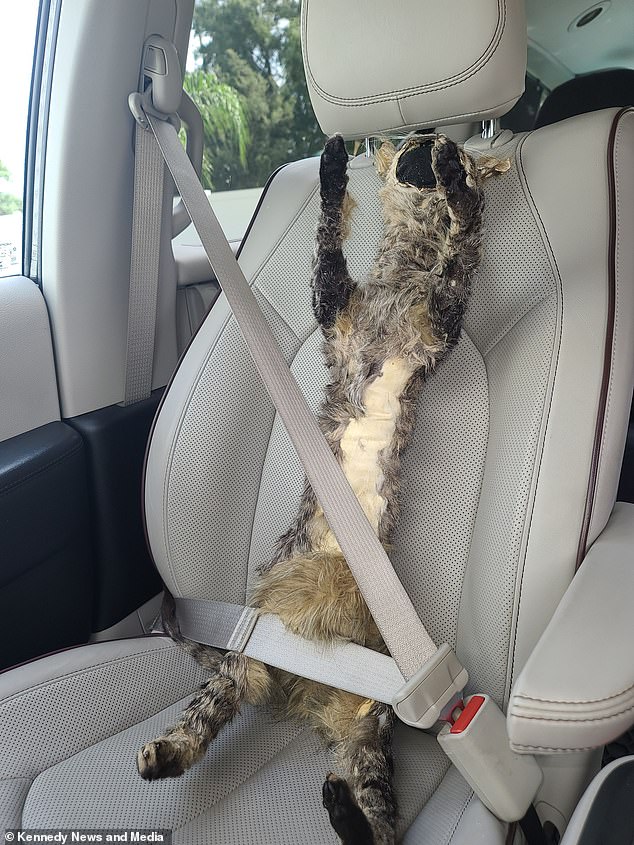 She admits that when it was finished she thought: ‘Oh good lord, do I ever want anyone to see this?’ 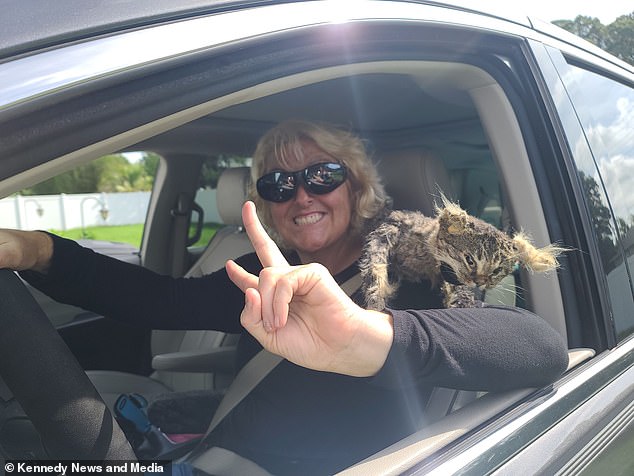 Jennifer has successfully stuffed squirrels, a raccoon and a possum too, but admits cats have been the hardest animal to master so far, she says

Jennifer, who lives with 41-year-old boyfriend Neal Richardson and daughter Paris Clark, 17, said: ‘Once you’ve removed the insides, you turn them inside out, put salt on them, then wash it off after a few weeks, but his hair started washing off and his feet dried up.

‘That’s why he’s standing on his tiptoes because his feet went hard and I didn’t know what I was doing wrong. He was bald but I just thought ‘I’ve come this far I have to keep going’.

‘The mouth kept stretching too, so I didn’t know what to do with this giant, gaping mouth, so I decided to put some felt in there. I think that looks quite cute though.

‘I kept thinking ‘it’ll get better, it’ll get better ‘I can fix this’. I thought I could add some fake fur and do some touch-ups and it’d look better but no, I didn’t do a very good job.

‘He’s scary but also he’s pretty cute, he’s got such a big smile. He just looks like a happy cat, either that or he’s screaming or throwing up.’

In a bid to boost the morale of fellow enthusiasts struggling to master the art, Jennifer shared her macabre photoshoot on Facebook earlier this month. 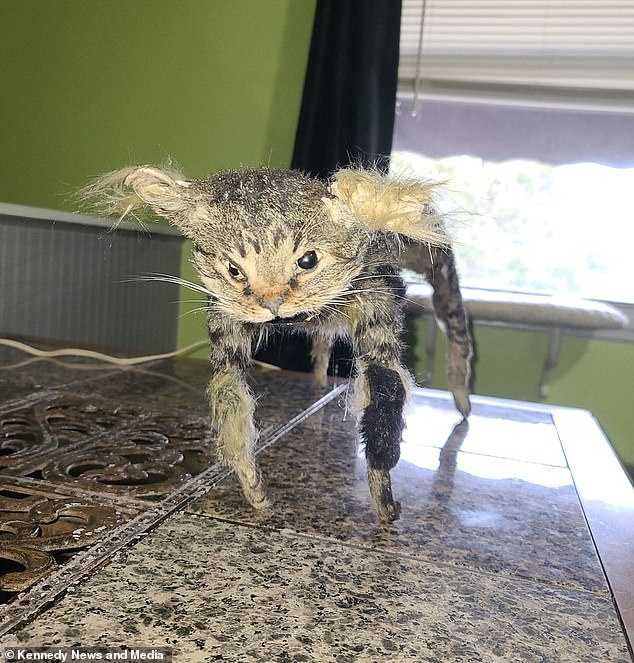 She shared how the cat lost its fur but she simply stuck it back on, saying: ‘He was bald but I just thought ‘I’ve come this far I have to keep going’ 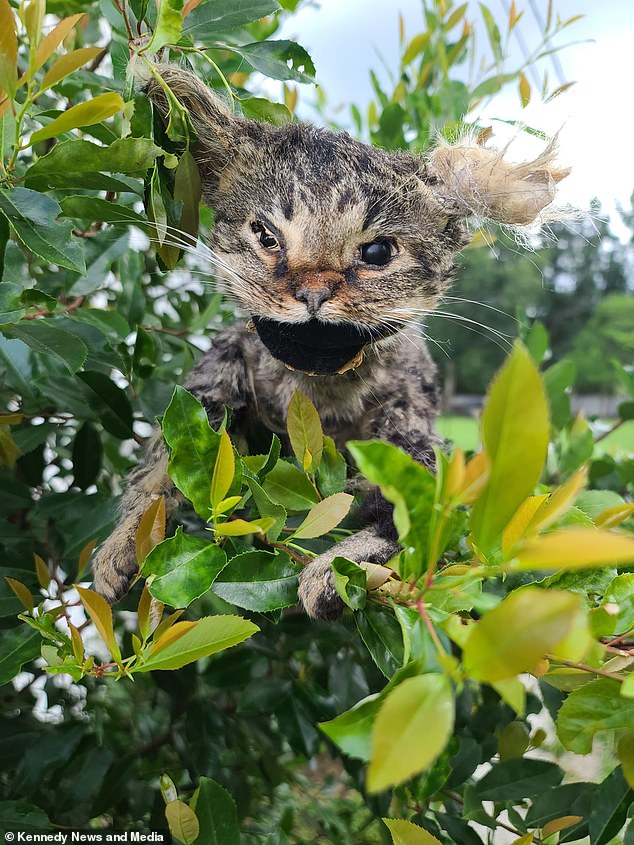 Jennifer has successfully stuffed squirrels, a raccoon and a possum too, but admits cats have been the hardest animal to master so far.

She named the cat Oscar after the US hot dog firm Oscar Mayer because of his body’s bizarre length, but admits she isn’t sure of its gender because of the poor state it was in when she found it.

Jennifer’s Facebook post reads: ‘I am posting to make you all feel better about your own accomplishments. 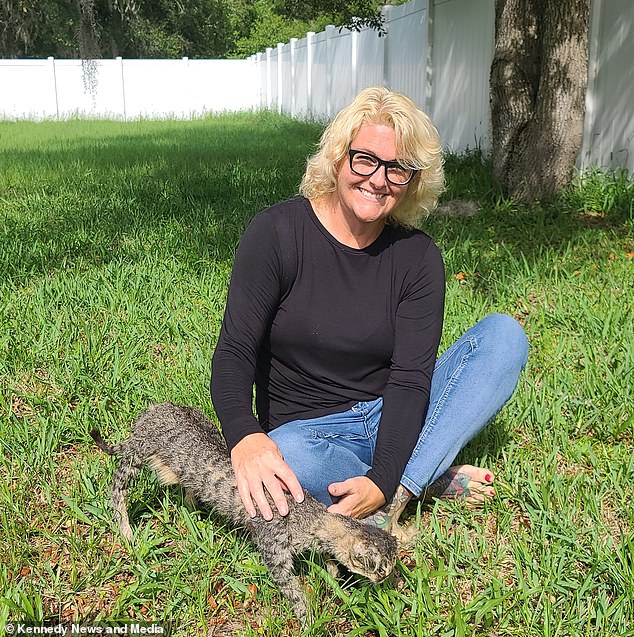 ‘I soft mounted this deceased cat. If the end goal is an elongated hot dog with hair missing, then I was very successful.

‘I have seen other mounts of cats on this page who also had great success with hot dog cats. I tell you, it just keeps stretching and stretching.

‘I also couldn’t figure out how to close up the mouth that also stretched to double the size so Oscar Mayer is forever vomiting or screaming my failures at me.

‘So, take a good look and then pat yourself on the back today because you are better than this.’ 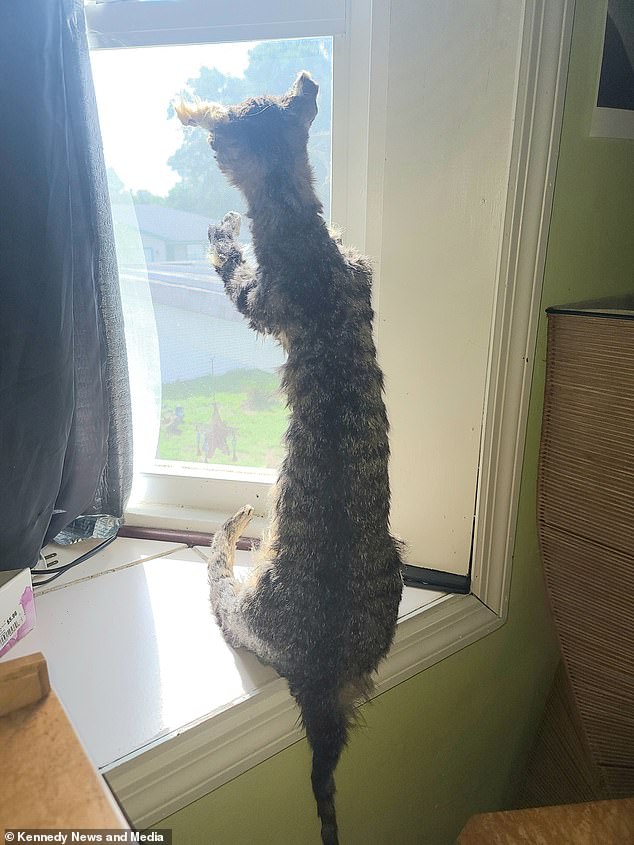 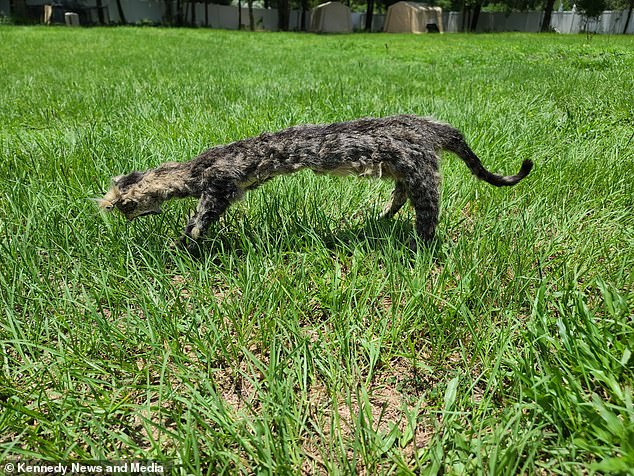 Leave it to the experts; Clark advised those looking at photos of Oscar to not try taxidermy at home

Shawn Paul commented: ‘This cat can be described with literally any adjective at all. Glorious, hilarious, terrifying, fantastic, terrible, beautiful, disturbing, the list doesn’t end.’

Jenna Thurston added: ‘This belongs in a horror movie for sure.’

Bear Hicks said: ‘This is the single most terrifying thing I have ever seen, holy s**t.’ 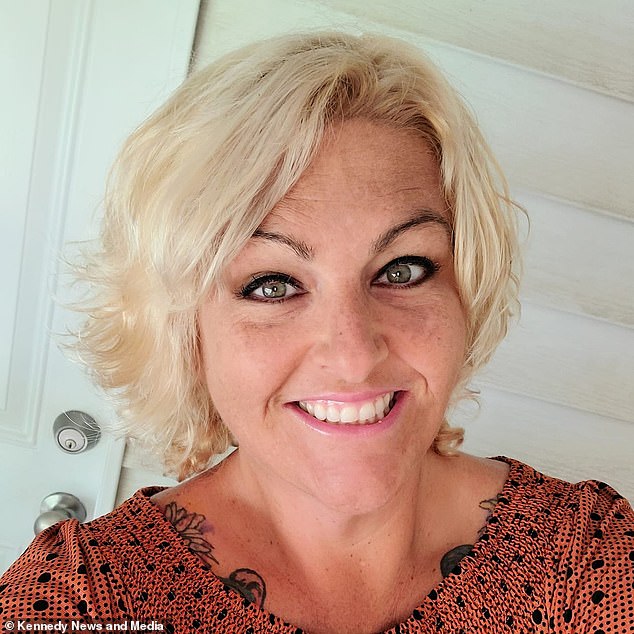 Dawn Townsend said: ‘I could not love this more. I just showed my 10-year-old son and said ‘look how happy his big smile is’. He said, ‘or maybe he’s getting ready to eat everyone’s souls’.’

The images have also been viewed more than one million times in a viral TikTok but some have criticised her project as ‘disrespectful’ on both platforms.

Muhammed Yassine Taha commented: ‘For the love of god let the animal rest in peace.’

However Jennifer’s daughter Paris posted a TikTok response shortly after defending her and the mum was keen to express her intentions were pure. 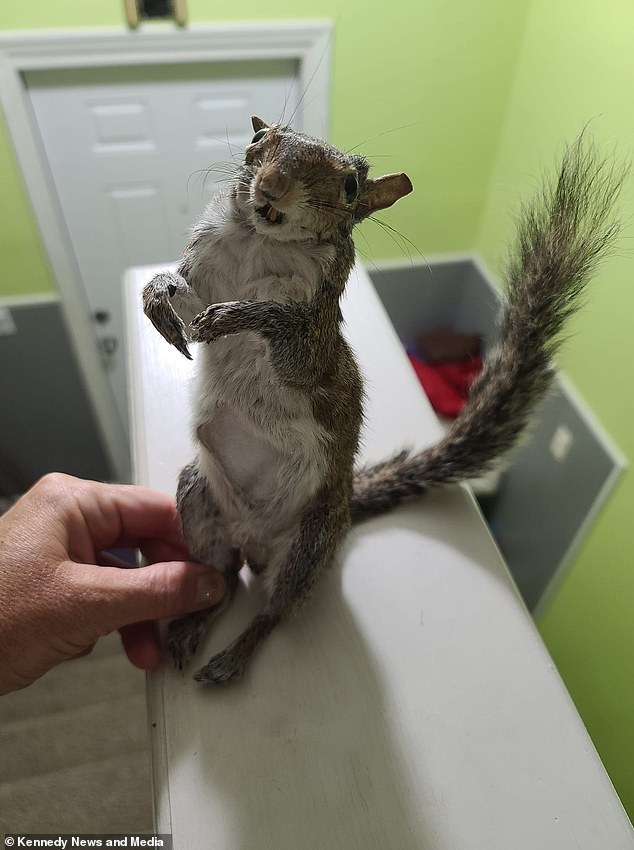 More successful attempts have followed though, with this squirrel looking more realistic

‘The fact I’m an art teacher makes it so ironic that I did such a terrible project, but it was with the best of intentions.

‘I haven’t shown my class because they’re small and they might be scared by him. But if they liked him I wouldn’t mind putting him in the classroom and having a classroom mascot.’

Persevering Jennifer said she’s not giving up taxidermy after the viral post’s reaction, but admits she’s learned some lessons and believes those looking to have their own cats stuffed should leave it to the experts.

Jennifer said: ‘I’d probably not pull on it as much so it didn’t stretch. I’d have to try it again to see if I’d make the same mistakes.

‘If it’s a beloved pet and you want it to look correct, don’t try and do it yourself if you don’t know what you’re doing, leave it to the experts.’

A STEP-BY-STEP LOOK AT HOW TAXIDERMISTS MOUNT ANIMALS

Brooklyn-based taxidermist Amber Maykut says she gets asked a lot about the mounting process, including whether the insides of the mounted animal are real.

‘All taxidermy means the movement of skin,’ she says. ‘So it means: taxi, like a taxi cab, movement. Dermy, like dermatology, skin. So what you’re doing is removing the skin from the animal and then moving it onto a mannequin and then pinning it or like placing it in a movement, like moving it around the eye and around everything so that it sits in a realistic looking way.’

Depending on what animal a taxidermist is working on, the mounting process can take anywhere from several hours to several months. Regardless of how long it takes, though, the steps are generally the same.

After getting the measurements, the taxidermist either orders a mannequin that matches the measurements of the mount or makes a mold that follows the specifications for the skin to go on. In the cases of some smaller animals such as birds, a stuffing also works. Customers order their mounts specify how they want their animal to be posed. For example, a shoulder mount of a deer might be turned to the right, to the left or centered in the middle, depending on where the customer is putting their trophy.

The first incision into an animal skin is when the taxidermist removes the internal organs of the animal, after which it is skinned and fleshed to make sure all the fat has been scraped off the skin. Depending on what kind of animal it is, if it’s a fish, bird or lizard, the head requires a slightly different skinning procedure.

Once the skin has been cleaned of all fat, it has to be tanned, or preserved. For bigger animals such as deer or bears, many taxidermists will ship out the animal skin to a tannery where the skin is treated and dried, which could take months depending on the animal’s size. Smaller animals, Amber says, have thinner skin, which makes it possible to use a dry treatment on the skin right after it is removed from the body. The dry preservative is ‘basically a powdered borax’, she says, so once the skin has been removed, fleshed and cleaned with soap, it can be powdered with the treatment and mounted right then and there.

To mount, first the skin is put on the model, or form, to make sure it fits before it is sewn in. Glass eyes are applied to the model and a kind of clay is applied around the eyes so that the skin doesn’t retract, which would give the animal a wide-eyed appearance. The skin is then put back onto the form with ear inserts glued in place. The skin is sewn up and the mount is left to dry, before the taxidermist airbrushes, grooms and touches up the animal.