Foreign policy problems can be uniquely difficult to solve. They require us to make predictions that are almost certain to be wrong most of the time. With rare exceptions – such as the Iraq War – the big questions are a matter of bipartisan agreement.

That’s partly because it’s considered in the national interest to present a united front to the world. But that in turn makes public debate difficult because it quickly becomes a sign of a weakening position or of disunity. 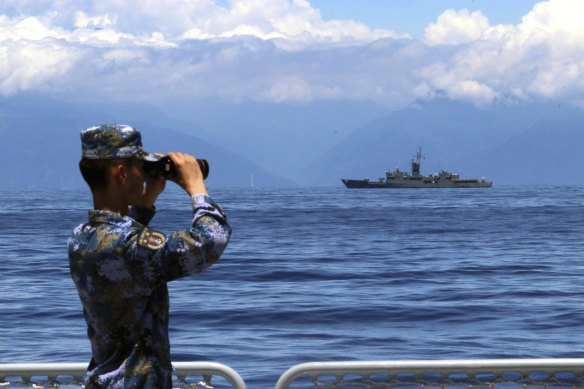 Right now, this is a problem for Australia. As the relationship between the world’s two greatest powers becomes increasingly febrile, we’re possibly hurtling towards a serious flashpoint in the thorniest geopolitical issue we’ll face this century.

The escalation we’ve seen this past week since US Speaker Nancy Pelosi’s visit to Taiwan, which has China reiterating it reserves the right to invade, tells us just how high the stakes are becoming. And yet we have no way to have a serious democratic debate about how we should handle this.

That much became clear during the Chinese ambassador’s speech at the National Press Club this week. When asked what circumstances would cause China to invade Taiwan, the ambassador’s response was telling: “I would rather not use the word ‘invasion’ when we talk China and Taiwan … Taiwan is not an independent state … Taiwan is a province of the People’s Republic of China.”

That is the sound of the “one China” policy, in which Taiwan simply must be reunified with the mainland at some stage. But it is also the sound of China calling us out. Our position – following the United States – is one of “strategic ambiguity”, where we choose not to express a clear view on it.

In formal terms, it goes like this: we “recognise” the People’s Republic of China as the sole legal government of China, but we only “acknowledge” that the Chinese government considers Taiwan to be a part of that country. Thus we don’t recognise Taiwan as an independent state, but nor do we recognise it is part of China. We simply talk around it.

China is pressing on that pressure point, effectively saying: you can’t invade your own country, so do you accept Taiwan is part of our country or not?

It’s doing this for a reason. While this ambiguity remains official policy, the US, in particular, has had several startlingly clear moments of siding with Taiwanese sovereignty. Most spectacularly, this has involved repeated statements from President Joe Biden that the US would intervene militarily if China attacked Taiwan, and even called Taiwan “independent”.

White House officials were then forced to walk back those comments, becoming increasingly unconvincing. Particularly, once you add the fact that American marines have openly trained with Taiwan’s military, and that Donald Trump lifted restrictions on contacts between US and Taiwanese officials, emphasised commitments to Taiwan, and sent it advanced weapons systems.

Meanwhile, Australia’s posture towards China has been more aggressive – sometimes provoked, but sometimes not — as we saw when the Morrison government called publicly for an inquiry into the origins of COVID-19. And while the Albanese government clearly wasn’t enamoured of Pelosi’s visit to Taiwan, it would never publicly criticise it.

All of which throws into sharp relief the Chinese ambassador’s pointed remark that “China and Australia should make independent judgments … free from the interference of a third party”. Translation: stop subcontracting out your position to the US. And don’t choose the US over China in the growing conflict between the two.

Here again, China is identifying a position Australia won’t declare, but which everyone knows to be true. Australian politicians might repeat the mantra that we don’t have to choose between China and the US, but should push come to shove, we already have.

That gets sharp around Taiwan because of a question no Australian politician will want to answer until they have no choice: if China invades, and the US decides to send its military, will we join them? Our approach to the US alliance says we probably would.

But the real debate would be whether or not that would be in our national interest. And that would depend on what consequences we’re happy to wear. Are we happy for our economy to grind to a halt? Will we risk an invasion, assuming the US will defend us? Does it change things if Trump is elected in two years?

Circumstances are asking us the question of a century. My reading of China’s language is that it sees us really as US representatives in the Pacific. It would prefer this to change, and will apply pressure to that end, but otherwise is quite prepared to engage with us on those terms. Meanwhile, we’re acquiescing to that role. In doing this, we’re inevitably punting on the kind of unknowable future that foreign policy so often throws up. We’re basically assuming that American power will continue to hold sway, that Chinese power will remain in check, and that in the event of open conflict, we’ll be safest behind American shields.

This is becoming a hotly contested debate in foreign policy circles, between those who insist we stick even closer to the US, and those who think that, whether we like it or not, Chinese ascendance is inevitable and we should respond pragmatically to that fact – a bit like New Zealand is.

But whatever debates are occurring in foreign policy think tanks and universities, there is no democratic debate on the horizon. Our increasingly pronounced US tilt is bipartisan, so the pros and cons of that position never get agitated publicly. Even to do so would seem vaguely seditious at this point.

I understand why. But the problem is that the Australian public has no idea what we’re meant to be walking into or what calculations are being made on our behalf. It may be that doubling down on the US alliance is the right path to take.

But even if that’s true, we are entering an era when that will come with costs. What are they? Or more precisely, what do our political leaders think they will be? What consequences are they signing up to accept? It is hard to think of a weightier political judgment being made in our lifetimes. And it’s extraordinary that if the public can be said to be making it at all, we’re doing so in the dark.

The Opinion newsletter is a weekly wrap of views that will challenge, champion and inform your own. Sign up here.