Baby bumblebees are being brain damaged by pesticides

Pesticides carried into nests by worker bees lead to brain damage in baby bumblebees and a ‘significantly impaired’ learning ability.

Researchers from Imperial College London scanned the brains of bees exposed to imidacloprid – an insecticide with a similar chemical makeup to nicotine.

The micro-CT scan revealed that parts of the brain responsible for learning grew more slowly when bees were infected during their larval phase.

Imidacloprid is reaching the bees through residues landing in flowers and plants then being carried into nests by workers.

This poses a major threat to the nest as the infected larval bees have a limited ability to forage properly when they turn into adults due to the brain damage. 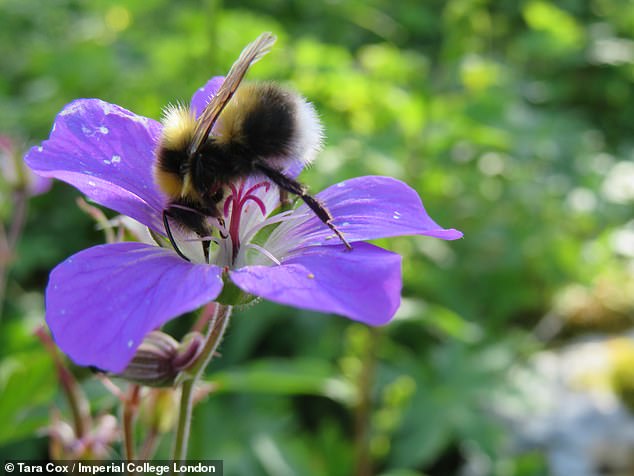 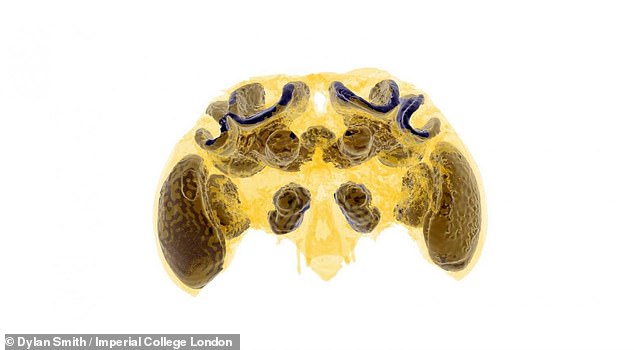 The majority of previous studies have tested the effects of pesticide exposure on adult bees because they directly collect pesticide-contaminated nectar and pollen.

Dr Richard Gill, from the department of life sciences at Imperial College London and the lead researcher on the study, said a bee colony acts as a superorganism which causes problems for every insect inside.

‘When any toxins enter the colony, these have the potential to cause problems with the development of the baby bees within it,’ he said.

‘Worryingly in this case, when young bees are fed on pesticide-contaminated food, this caused parts of the brain to grow less.

‘This leads to to older adult bees possessing smaller and functionally impaired brains; an effect that appeared to be permanent and irreversible.

Colonies can then be impacted by the pesticides weeks after exposure as the new, young bees can’t forage for food properly when they grow into adulthood.

Use of some insecticides like imidacloprid, which are also known as neonicotinoids, are restricted within the European Union but not around the world.

WHAT IS THE INSECTICIDE IMIDACLOPRID?

imidacloprid is a form of insecticide that acts as a neurotoxin acting on the central nervous system.

It works by interfering with the transmission of stimulus in the system.

It causes the paralysis and eventual death of an insect and is more toxic to insects than mammals.

It’s authorised for use in:

It is out of patent and is widely used for pest control in agriculture.

The team exposed bumblebees to small amounts of imidacloprid during their development as larvae or very young adults.

The learning ability of the larvae was tested after three days and after 12 days once they emerged as adults.

Bees that were fed imidacloprid when they were developing as larvae showed ‘significantly impaired learning ability’ compared to those that were not, the researchers said.

The team then scanned the brains of nearly 100 bees from the different colonies.

Those who had been exposed to pesticides also had a smaller volume of an important part of the insect brain, known as the ‘mushroom body’.

The mushroom body is known to be involved in learning ability in insects, and the research team explained that poor performance on the learning task correlated with smaller mushroom body volume.

They said the findings support the suggestion that smaller mushroom body volume associated with pesticide exposure is the cause of the bees’ poor performance.

Those who had been exposed to pesticides also had a smaller volume of an important part of the insect brain, known as the ‘mushroom body’ – pictured here

The team say the effects of larval exposure to the insecticide could not be overcome, the researchers said, pointing to a potentially permanent effect.

‘There has been growing evidence that pesticides can build up inside bee colonies,’ said Lead author Dr Dylan Smith from Imperial.

‘Our study reveals the risks to individuals being reared in such an environment, and that a colony’s future workforce can be affected weeks after they are first exposed.’

He added: ‘Bees’ direct exposure to pesticides through residues on flowers should not be the only consideration when determining potential harm to the colony.

‘The amount of pesticide residue present inside colonies following exposure appears to be an important measure for assessing the impact on a colony’s health in the future.’

The research has been published in the journal Proceedings of the Royal Society B.

WHAT HAS HAPPENED TO THE BEES?

Declines in recent months to honey bee numbers and health caused global concern due to the insects’ critical role as a major pollinator.

Bee health has been closely watched in recent years as nutritional sources available to honey bees have declined and contamination from pesticides has increased.

Bees use sugar to fuel flights and work inside the nest, but pesticides decrease their hemolymph (‘bee blood’) sugar levels and therefore cut their energy stores.

When pesticides are combined with limited food supplies, bees lack the energy to function, causing survival rates to plummet.