It’s a piece of cake! Former tattoo artist reveals he had to ask his mum how to bake when he started making ultra-realistic creations resembling everything from food to famous faces

A former tattoo artist baker has revealed how he turned his artistic talents to creating ultra-realistic cakes, despite never having baked in his life.

Ben Cullen, 29, from Birmingham who now lives in Chester, has been dubbed The BakeKing for his captivating optical illusion cakes that often take longer than a day to make.

His impressive efforts have given him the opportunity to appear on Channel 4’s Extreme Cake Makers in addition to baking for a host of celebrities including Rita Ora, Johnathon Cheban and Megan McKenna, and won him 162,000 Instagram fans.

The baker’s incredible creations range from cakes made to look like food, such as an incredibly realistic sausage sandwich, to celebrity likenesses and life-size figures.

Speaking to FEMAIL, Ben revealed that despite his success in the industry, he has never had any professional training, and joked that the first thing he did when he launched his new career was to phone his mum to ask her how to bake. 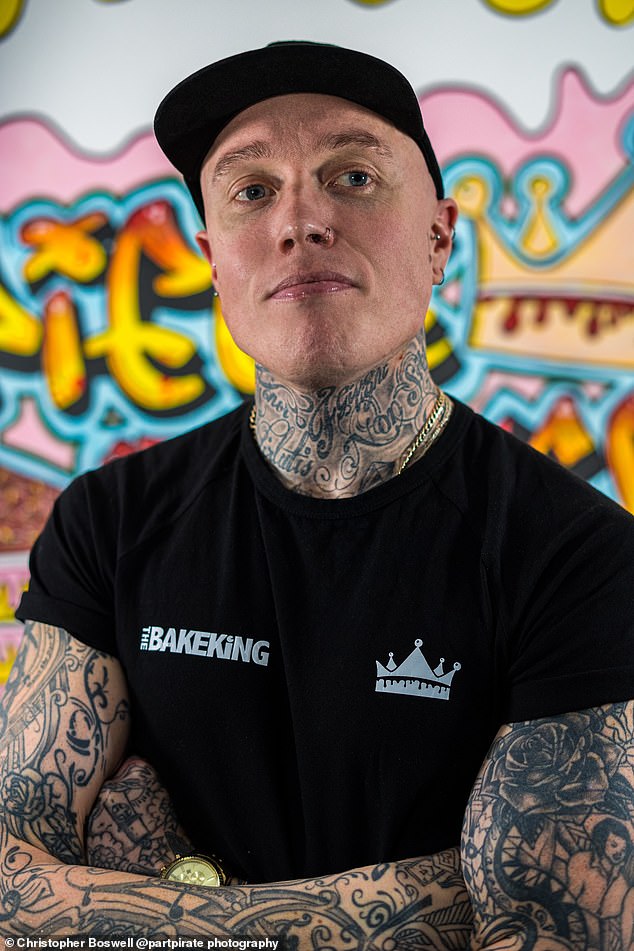 Ben Cullen, 29,  (pictured) from Birmingham, who has been baking incredibly realistic cakes that resemble everything from food to celebrities since 2015, revealed he hasn’t had any professional training 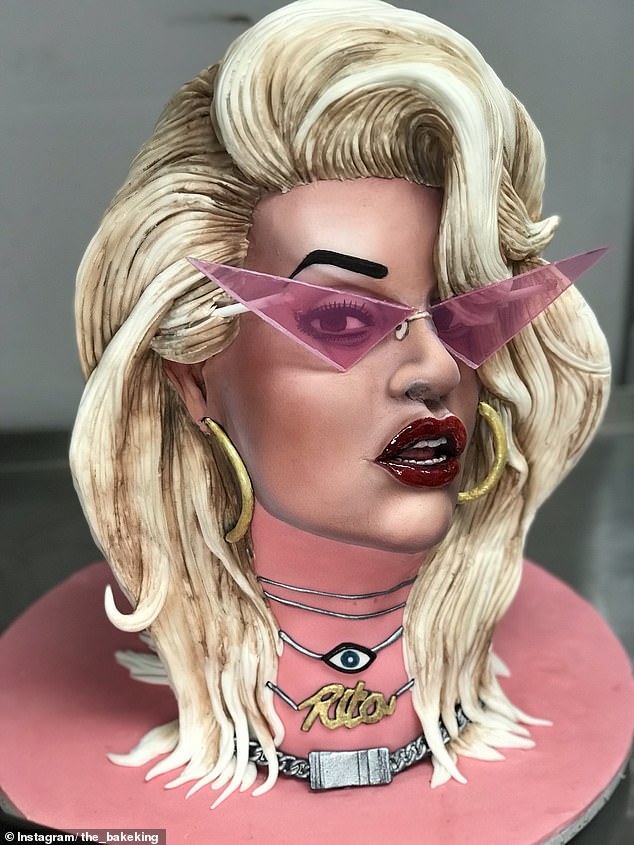 Ben said he was inspired to begin baking after the mother of a client he was tattooing, showed him some cake decorating models that she had made. Pictured: A cake Ben made of Rita Ora for one of her past birthday celebrations 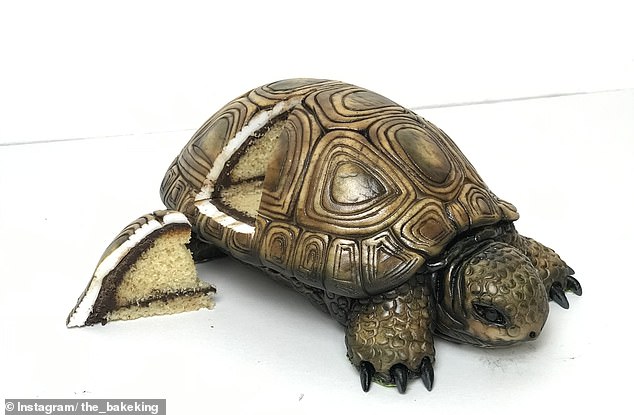 Slow and sweet! A tortoise cake made by former tattoo artist Ben Cullen, who goes by the name The BakeKing

‘I always wanted to be an artist, since I was a young boy. So growing up any type of art I came across I had to give it a go,’ he said.

‘I had no intention or even knowledge of cake artistry as a type of art.

‘But in 2015 the mum of a customer I was tattooing showed me some cake decorating models she’d made. I was fascinated and had to give it a go, and as soon as I did I became obsessed and wanted to master the craft.’

Ben who studied graphic design and fine art at university, revealed he’s practised art his entire life and has worked tirelessly to transfer the skills to his career as a cake artist.

He admits that throughout the learning process he made many mistakes and had to keep repeating each challenge until it he got it right.

He laughed: ‘The very first thing I did in my career was to ring my mum and ask her how to bake a cake. All jokes aside, I genuinely had no previous experience or interest in making cakes.

‘I made a cake for my dad and a few family and friends as a novelty and for a bit of fun. As I made more and more, I took the making process more seriously and challenged myself to try harder designs.

‘I think the first illusion cake that I made was some fruit – a banana, apples and oranges. I loved airbrushing and the colouring on these fruits, and that made me want to see if I could trick people into thinking they were the real thing.

‘Even myself after I created them, I was so impressed at how you can replicate objects so that they play with your mind. 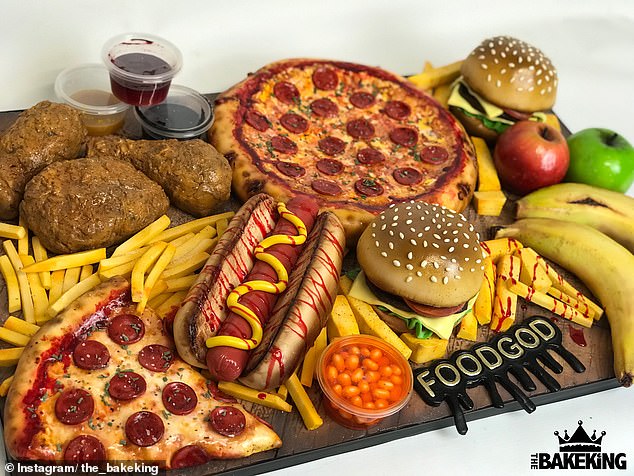 Fast food, but not as you know it! A chocolate cake Ben made for Foodgod Johnathon Cheban, to celebrate his win at the World Blogger Awards 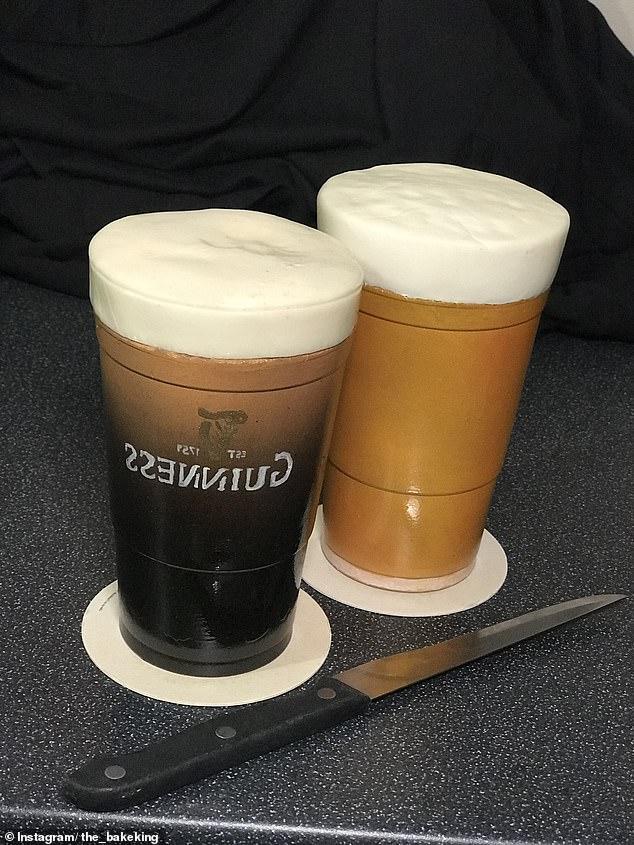 A pint of sponge please! Ben believes illusion cakes add a magical element to baking, such as this Guinness and beer cake he made for Father’s Day 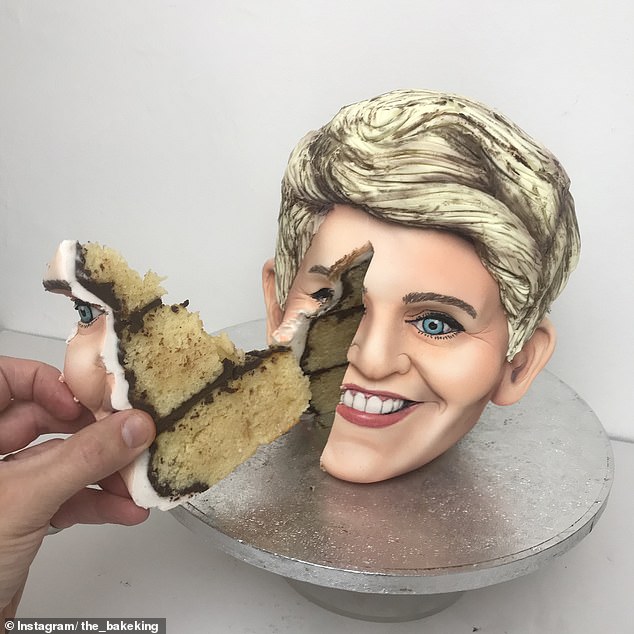 Taking a slice out of Ellen! TV host Ellen DeGeneres is just one of the many famous faces Ben has immortalised in sponge

‘It adds a magical element to what I do, and starts to break the mood of how fun and interesting the cake world can be. It doesn’t just have to be bunting and Victoria sponge.’

He said that he’s constantly challenging himself with new designs and to get better with each cake that he makes.

‘I would say that probably my most challenging to date was a 7ft ringmaster cake that I made for the biggest international Cake show, Cake International,’ he said.

‘I was asked to make the cake for the front entrance piece, so it was the first cake everybody saw when entering the show.

‘This added a lot of pressure to the build and with it being the biggest cake I had made so far, it was certainly a rollercoaster to get it just right and nail the design. 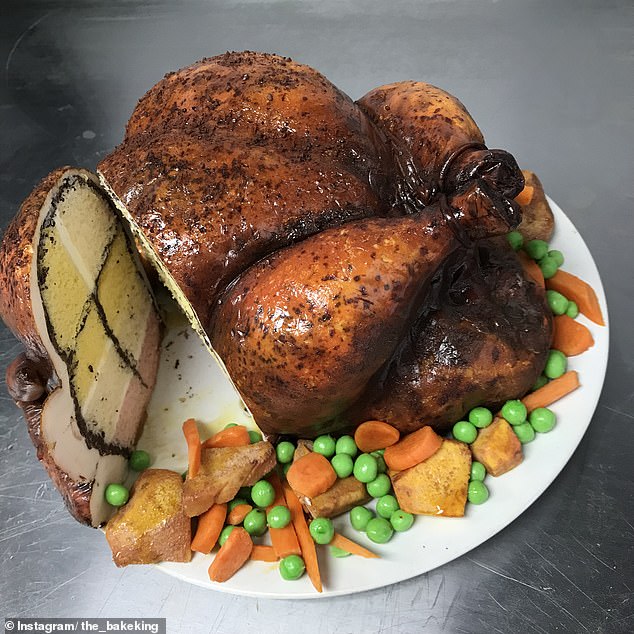 Ben aspires to influence other people to take an interest in baking with his work. Pictured: A turkey cake he made to honour Thanksgiving, spray painted using Spectrum Flow products 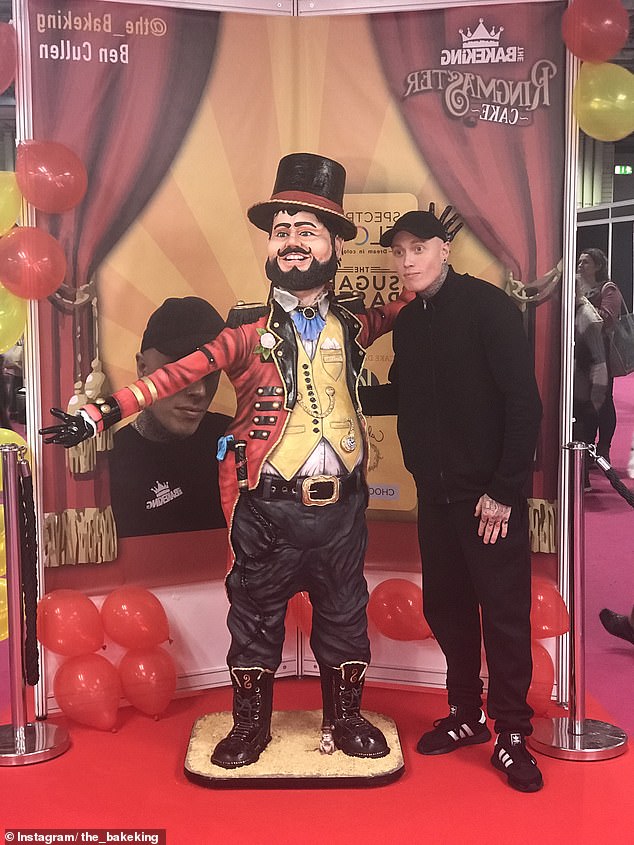 Ben said one of his most expensive and challenging cakes has been the 7ft ringmaster (pictured), that was made for Cake International 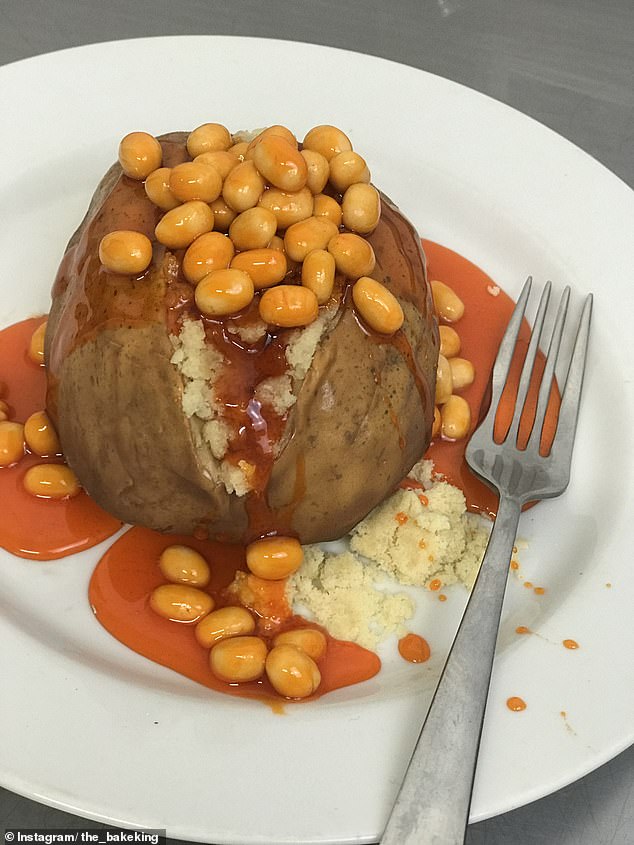 Ben revealed he doesn’t have one specific bake that has been his favourite. Pictured: A vanilla Cake with chocolate ganache gives the illusion of a jacket potato with beans 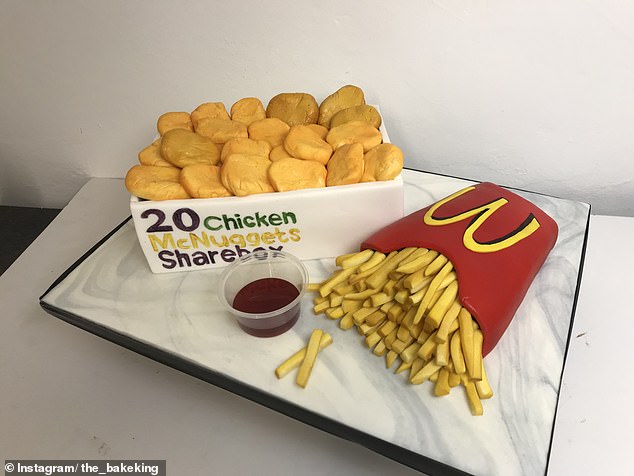 ‘The bigger the sculptures the more they cost for me to make as I like to use all cake in all of my pieces. The ringmaster probably cost the most to make, along with a number of life sized torso busts I have made of people. The time and detail that goes into these types of sculptures also ramps up the expense.’

Ben said he hopes his work will influence others into baking for themselves.

He continued: ‘At the moment I love creating the illusions the most because they grab attention from people who otherwise wouldn’t be interested in cake making and the cake world.

‘Hopefully this can get new generations and young people fascinated with the style of art and fancy giving it a go.’

Speaking of his favourites he added: ‘I have different favourites for different reasons, an example would be my first ever gold award cake that I made of a mechanical skull.

‘This isn’t my favourite design I’ve ever made but at the time I was absolutely ecstatic I received my first gold award and the cake was a real checkpoint for me so I will always remember that. 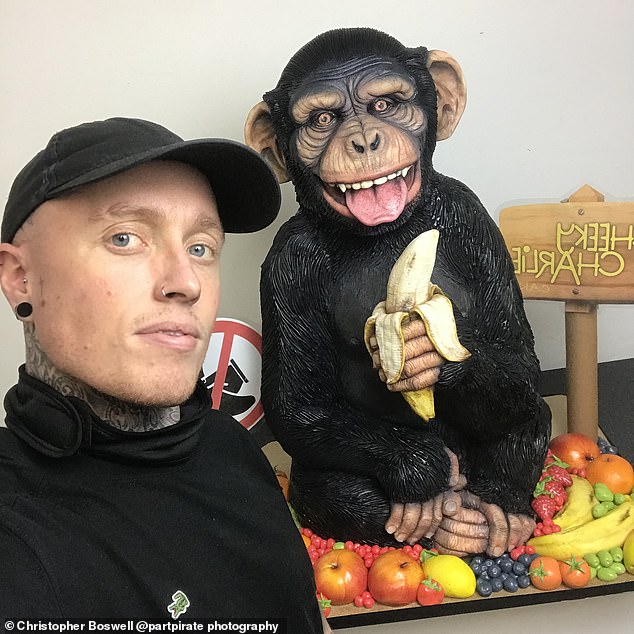 Cheeky monkey! The baker with his 3ft Chimpanzee Cake, perched on a selection of realistic fruits 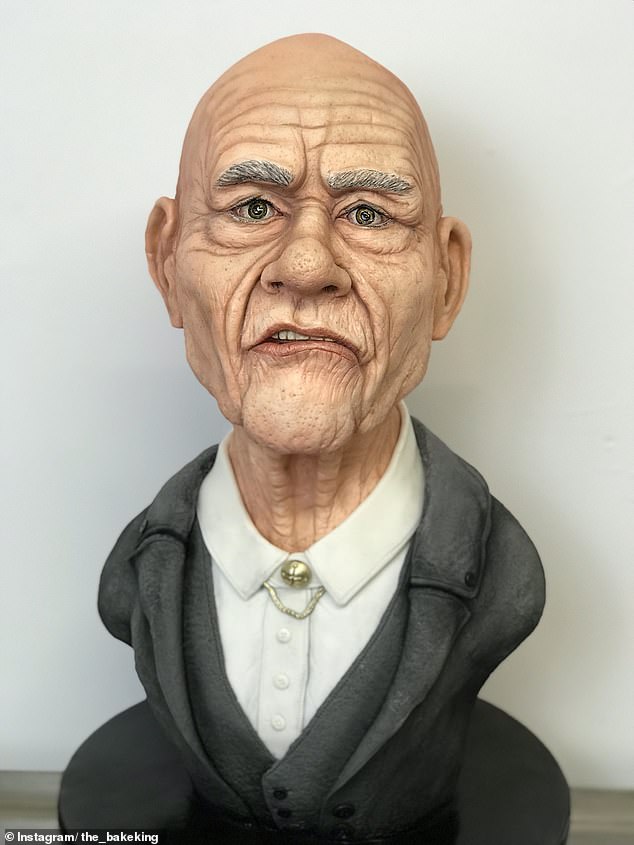 Ben won gold at The Cake Show on Tour for his Cyril cake (pictured). He has received a flood of support for his baking and now boasts over 162,000 followers on Instagram 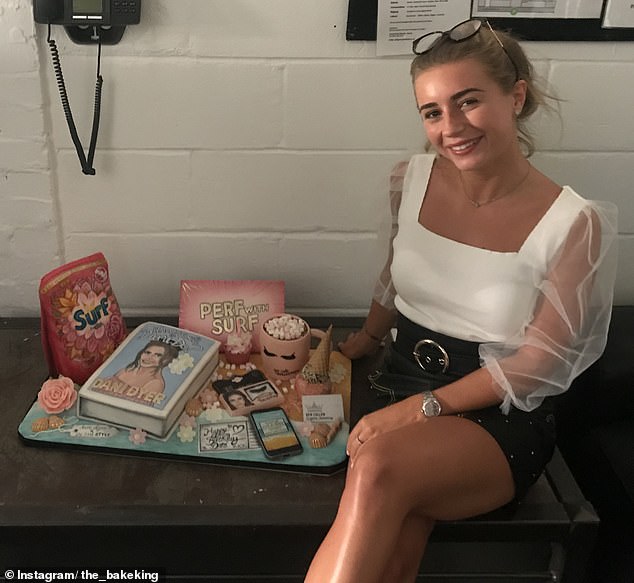 The 29-year-old said he particular enjoys making cakes for celebrities.  Pictured: Dani Dyer with a cake Ben made for her 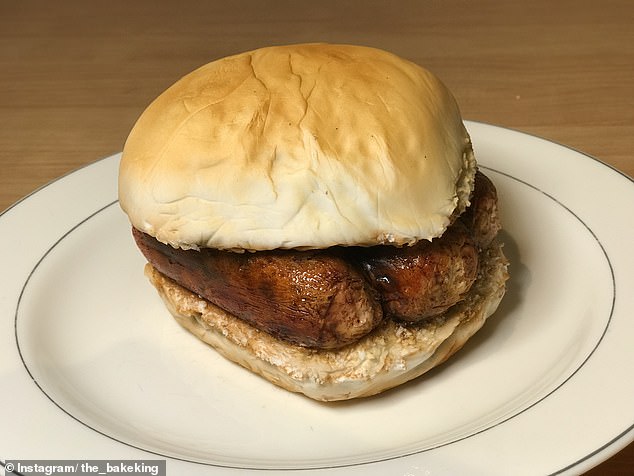 Fancy a sausage sandwich! A vanilla cake with chocolate ganache looks like something you’d happily tuck into for breakfast

‘Some of the cakes I have made for celebrities have been my favourites as their designs in some cases have been more extravagant and have let me loose with the design side of things.

‘I loved the designs for those celebrity cakes in particular, because they were all for big events and so much fun to make with their designs.’

Ben revealed he’s working on exciting projects that will be shared on his social media in the next few months.

Among his ambitions is having his own TV show, revealing behind the scenes of his baking creations.

He said: ‘Once I have an idea in my head I have to get it made. Often the first attempt doesn’t work out but during the process I’ll learn how I can improve it. 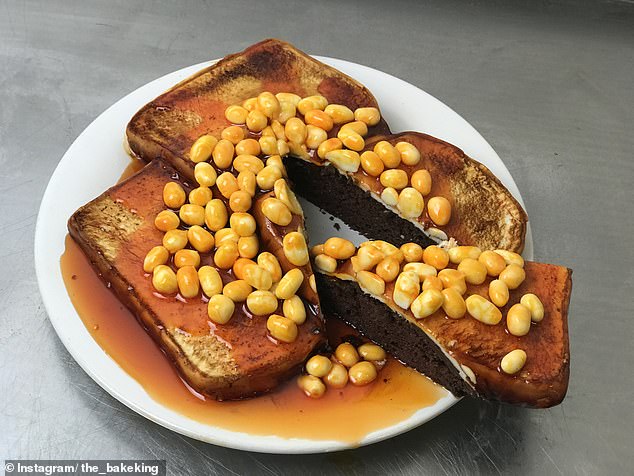 Ben said he tries to learn how to improve from the process of each cake that he makes. Pictured: A cake designed to look like beans on toast 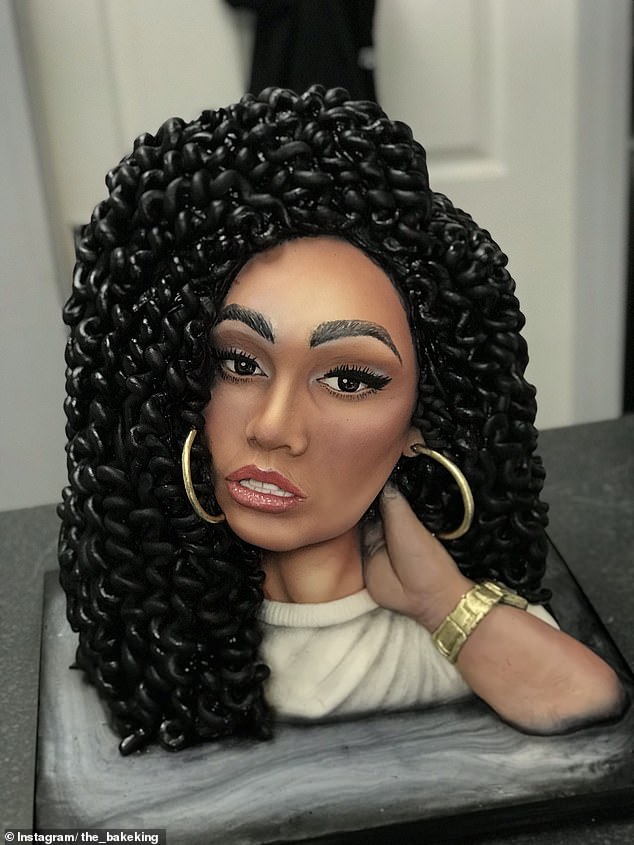 The 29-year-old advises being tough on yourself when making illusion cakes, because cutting corners won’t achieve a realistic result. Pictured: The cake Ben made for Little Mix’s Leigh-Anne Pinnock’s birthday 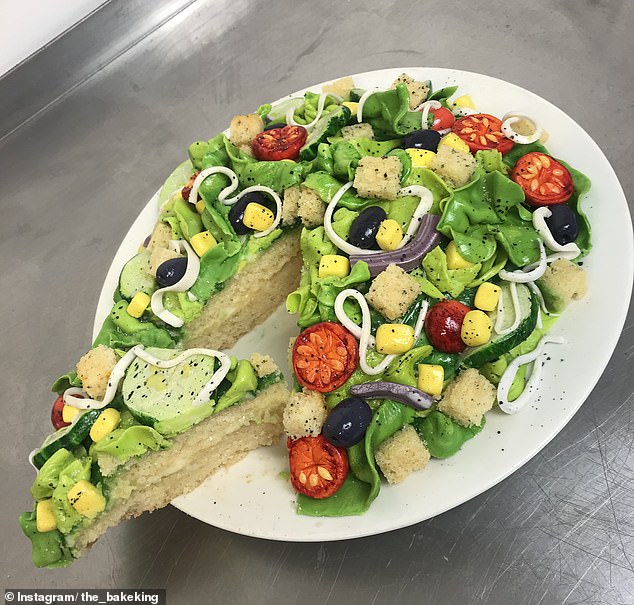 Not your average salad! Ben’s healthy-looking creatoin is a vanilla cake with buttercream vegetables

‘It’s important with the illusion cakes to be tough on yourself and to make sure you don’t cut corners, so that the illusion really works.

‘I’m working on a lot of things right now that previously have been my end goals, which is so exciting for me.

‘I’ve worked so hard to head towards these goals, and I will continue to do so until I’m there. I actually love the process of aiming for what I want to achieve.

‘Eventually I would like my own TV show, so people can see just exactly what life is like in my shoes, in this crazy cake world.

‘The ups and downs of each of the builds and the research and processes I go through people don’t get to see, usually just the end product.’ 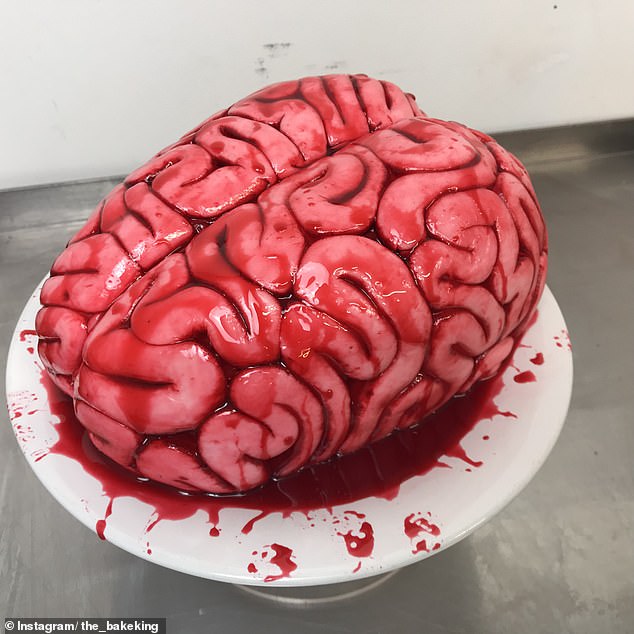 You have to be brainy to bake as well as this! Ben’s gruesome-looking Halloween vanilla cake with chocolate ganache 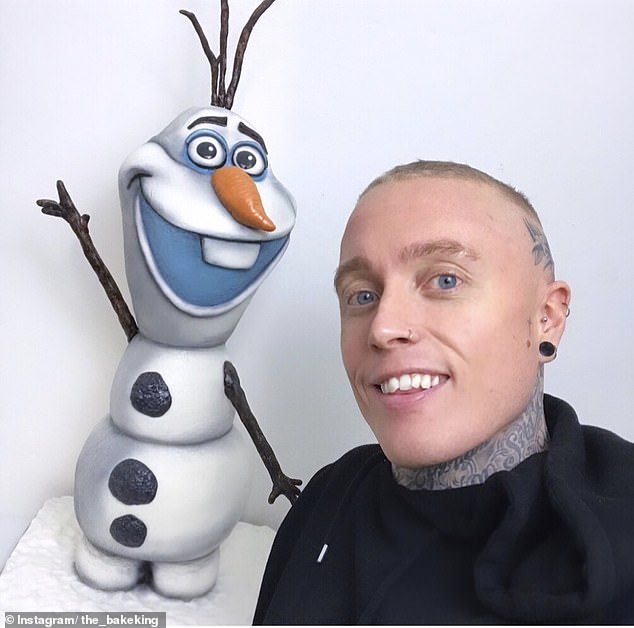 Ben who turns 30 in May, said now is the perfect time for him to ‘knuckle down’ to achieve his goals. Pictured: The baker with his Olaf cake