“I have so many crazy stories from that tour that half of them are blocked out from my memory,” Banoffee says over the phone from Melbourne. She’s recalling her stint as a member of Charli XCX’s backing band in 2018, when the British pop artist was opening for Taylor Swift’s Reputation Tour – a kind of synth-pop Russian-doll situation in which Banoffee found herself performing for as many as 75,000 fans a night. “I’d like to think I’ve compartmentalized it for my own sanity,” she adds. “Once you’ve seen one sports stadium, you’ve kind of seen them all.”

Of course Banoffee, born Martha Brown, didn’t just stumble onto working a 50-plus-date international tour by accident. She had spent the previous half-decade as a rising star in the Australian underground pop scene, blanketing distinct tales of vulnerability under layers of electronic slickness. On one of her early breakout hits, 2015’s “Body Suit,” Banoffee crafts a seductive R&B ode that’s all about masking one’s true self in front of a partner. “Put you on, like a second skin/Thin scales, just enough to swim,” she sings. “You’re so slimy, but you like the taste/I could make use of what I thought was waste.”

Following the release of her Do I Make You Nervous? EP that year, Banoffee relocated to Los Angeles to begin recording her debut album, Look at Us Now Dad, which has just been released after several years in development. Dissatisfied with the isolated nature of her previous work as a solo act, Banoffee hoped that proximity to the heart of the American music industry would help bring in new voices for her first full-length record. In her first year in L.A., she formed friendships with Lorely Rodriguez, aka Empress Of, as well as iconoclastic pop producer Sophie, who collaborated with Banoffee on the song “Ripe” and was the one to introduce her to Charli XCX. (Banoffee returned the favor, singing as part of the cacophony of voices on Sophie’s “Immaterial” in 2018.)

Soon, though, the pop industry in L.A. wore her out, as she powered through writing session after writing session for other artists in order to pay the bills. “I was doing that whole studio game, where they just put you in a studio with a different person every day and then you see what sticks,” she recalls. “I got tired of that machine very quickly.” 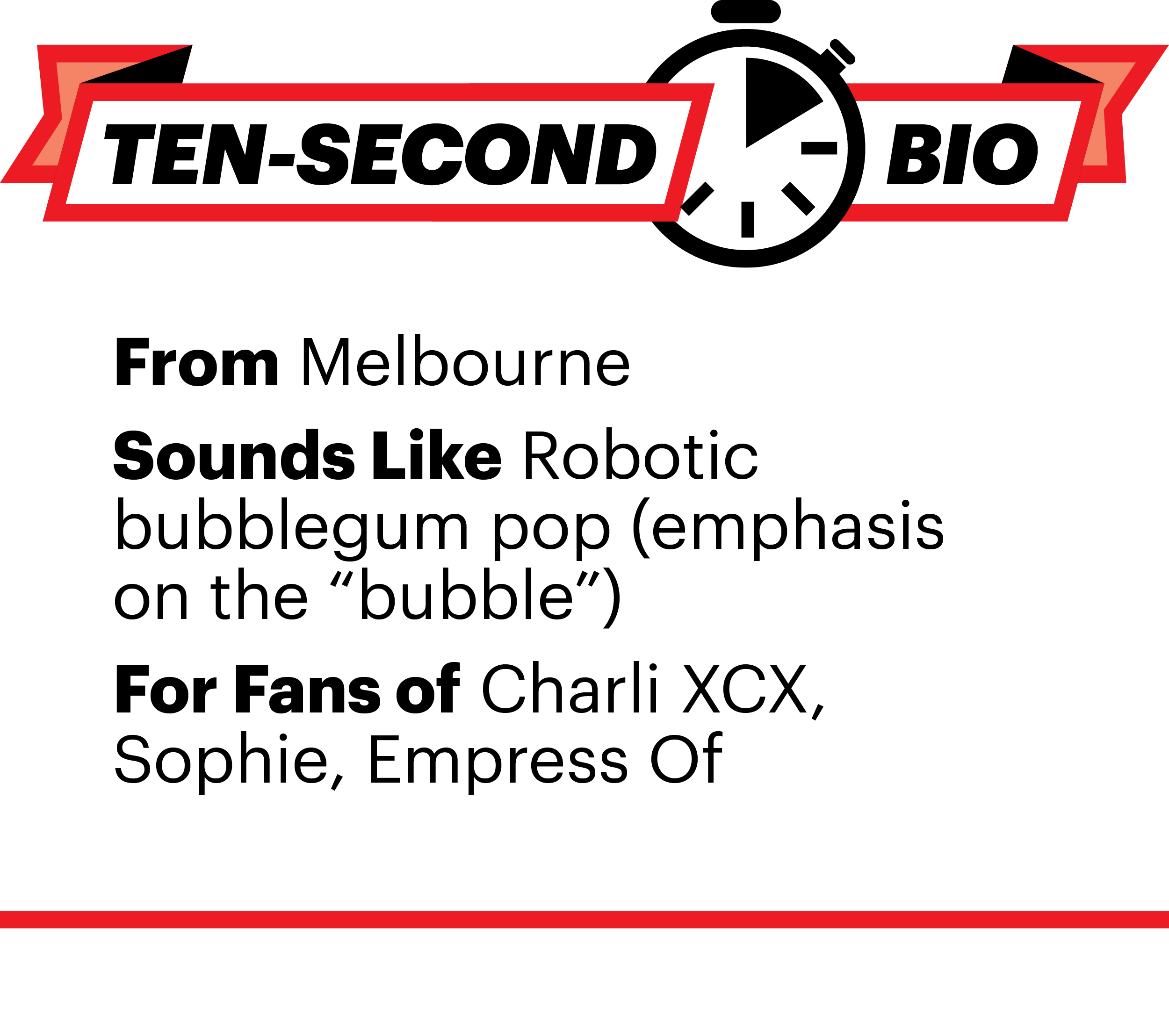 That loneliness and disillusionment bled directly into Look at Us Now Dad. “Contagious” was written in “about 10 minutes” following what Banoffee describes as one of the worst breakups of her life – “I actually made my partner leave. We had just broken up and I was like, ‘I’m going to record some vocals, so I need you to go.’” Another song, “Chevron,” stems from a particular low point in her L.A. journey, when her car broke down and she was forced to haggle with a tow-truck driver for a reduced rate. By then, as she alludes to in the lyrics, she was so broke that she’d had to sell her favorite synthesizer for extra cash. “I dash across the street /To the only thing that’s open/I need something to eat,” she sings over echoing guitar. “Thank god for the Chevron/I need something for me.”

The memories that glue Look at Us Now Dad together, though, have sat with Banoffee for much of her life. The title track, as well as the album’s several interludes, reads as a letter to her father and a treatise on their shared family trauma. Removed from his parents’ care at age four and raised in an abusive children’s home, Banoffee’s dad struggled with alcohol and substance abuse for much of his adult life before training at a Buddhist monastery in Thailand. “Trouble wasn’t subtle back then/It’s the belt or it’s the beer bottle/But I don’t wanna see you struggle no more,” she sings on “Look at Us Now Dad,” acknowledging the small miracle of survival for both of them. Her father’s voice appears on one of the album’s interludes, where he recalls being woken up in the middle of the night by resurfaced memories and meditating to clear his head.

Elsewhere on the album, like on the devastating “Permission,” Banoffee entwines her own voice with Auto-Tune as she addresses a man who assaulted her when she was young.

“I was thinking how when we all go through trauma or hardship, one way that a lot of us deal with it is to almost give away a little bit of our humanity or our emotion,” she says. “Auto-Tune is like [a way] that I have been able to achieve survival and achieve functioning like a normal human at times – it’s a hybrid between machine and human, to be able to disappear in the world.”

As personal as it gets, Look at Us Now Dad never feels shut off from the outside world, and underneath its clubby production is an intense feeling of solidarity – a “joining of hands,” as Banoffee has called it. She co-produced nearly all the final tracks with Yves Rothman (Nasty Cherry, Miya Folick), even though she says she is “quite protective of my production, especially when working with cis men.”

Rothman turned out to be a true partner-in-crime: “Really, all he ever wanted was for us to learn off each other. We both sat there on a computer each, and we produced songs at the same time. We’d take our time and then be like ‘What’d you come up with?’ and put them together.” She adds, stumbling quickly over the words, “I didn’t have a lot of money, you know? I couldn’t pay him the rate that he deserved, or do what most record labels would do for a producer and make it really worth their time. But he just became so invested in the record, and it was something that we worked on every day even when I was on tour, over the phone, over email.”

Between playing for Charli XCX and opening for King Princess on her North American tour, Banoffee also invited her friend Empress Of to feature on the track “Tennis Fan,” which became the album’s lead single. “Ripe” got a new, exhilarating spin when Banoffee reached out to the Chicago rapper Cupcakke for a guest verse.

“I made a list when I made that song — dream features I would want on it — and Cupcakke was number one,” she says. “I just sent her a fucking email and she replied and was like, ‘Yeah, cool, I’m down.’ I’m like, ‘Wait, how does that work?’”

Banoffee commends the pop artists she’s worked with, particularly those tied to the queer club scene, for helping to lift underground artists like herself up to a higher platform. “Obviously, [pop music is] an indulgent industry that is aiming to create pleasure, but it’s also taking so many risks, and pushing people in a direction they don’t even realize that they’re going in until they look back and go, ‘Oh, fuck, how’d I get here,’ you know?” Without them, she says, she wouldn’t have found support and encouragement outside of her homeland, and after nearly a decade spent working in regional scenes and as a touring artist, she’s ready to become someone else’s sponsor.

“When my first EP came out, and I started having people reaching out and realizing that my music does what any of the music that I look up to did for me…once I realized that, it did become a goal in mind,” she says. “Not only is it nice to feel what somebody’s going through — it’s also a really nice way for me to realize that I’m not alone.”