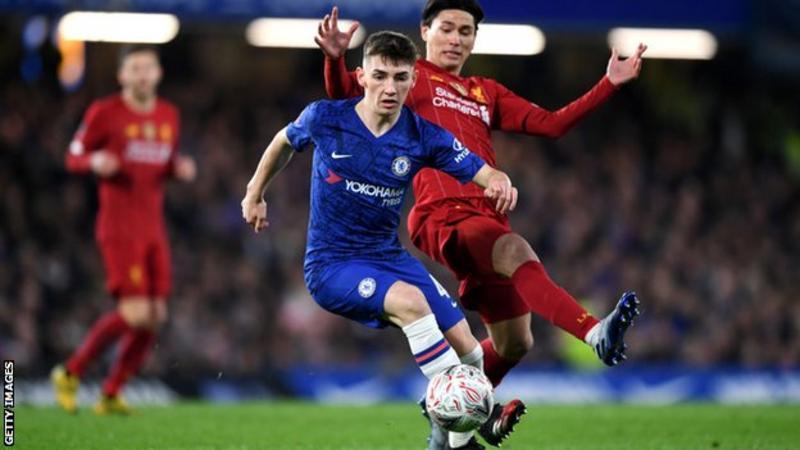 Frank Lampard called him incredible. Alan Shearer said he “bossed it” and Jermaine Jenas named him man of the match – safe to say Scottish teenager Billy Gilmour made an impression in Chelsea’s FA Cup win over Liverpool.

The 18-year-old attracted praise from players, pundits, journalists and fans as he helped Chelsea to a 2-0 win against Liverpool in the FA Cup fifth round.

Having played a total of just 281 minutes before Tuesday, has he staked a claim for a regular starting berth and a Scotland call-up?

“It was a good match, so it was,” Gilmour told BBC Sport. “I’ve been training very hard to get this chance and today I stepped up and took my opportunity – it was a great game and a great victory.”

What his manager & team-mates said

Gilmour, a former Rangers youth player, was only promoted to the Chelsea first-team squad three weeks ago, having played six times for the club so far.

Pre-match, Chelsea boss Lampard said it was a “comfortable choice” to select him for such a big game, and he was proved correct as the diminutive, boyish-looking Scot stood out among men.

“What an incredible performance for a young player,” Lampard said afterwards. “He was a calm head in that first five or 10 minutes. He’s a throwback of a midfielder.

“Can you put your foot in? Yes. Can you make angles to play the passes? Yes. He’s only slight in stature but he’s huge in personality. He deserves people to talk about him after a performance like that.”

Midfielder Ross Barkley, who scored the second goal of the night at Stamford Bridge, echoed his manager’s praise for his young team-mate.

“Billy was brilliant,” the England international said. “But it was not a surprise to me. I’ve seen him in training and he was like that in training last season.” 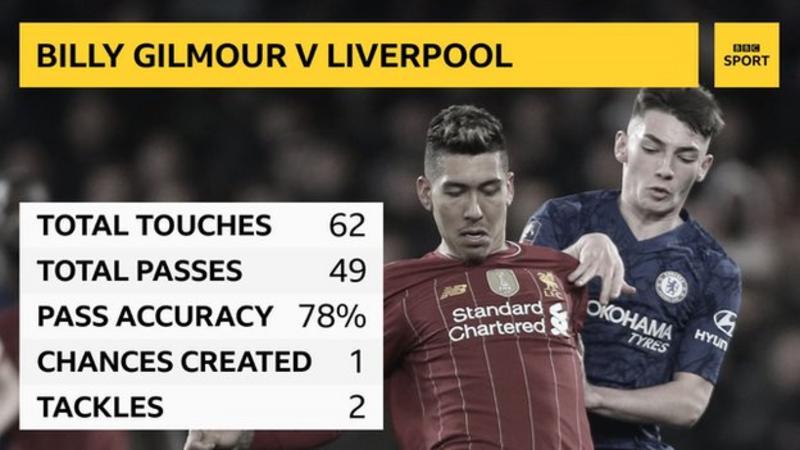 What the pundits said

Former Newcastle and England striker Alan Shearer on BBC One

He has bossed it. He’s done whatever he’s been asked to do, whether that’s collecting the ball and passing it forward, protecting that back four, spraying the ball around, he’s been absolutely magnificent.

He passed it forward – that was his first thought. Jorginho is now suspended for the next couple of games, so he’s put in a performance that’s said to the manager ‘you have to keep me in this team’.

Everything he has done has been spot on. He is so confident, to have that belief in his ability.

Former Tottenham and England midfielder Jermaine Jenas on BBC One

Billy Gilmour has looked like he is having a kick-about in the park with his mates. That is the biggest compliment I can give him.

I have been so impressed by this young lad. He’s had such a calm head and he’s not given the ball away all night. It’s been a brilliant evening for him.

Billy Gilmour in the middle of the park has been terrific, his all-round game has been fantastic.

He has been tenacious in the tackle and went straight in and nailed Fabinho. At the end of the [first] half, he tracked Sadio Mane all the way and Chelsea fans will feel he has been their player of the half.

Could he get a Scotland call-up?

Gilmour has represented Scotland up to under-21 level, but with the Euro 2020 play-off semi-final with Israel to come on 26 March, should Steve Clarke give him a first senior call-up? Should he start?

His potential has long been discussed, but now he is delivering performances at the highest level it might be increasingly difficult to leave him out, especially if he keeps his place in the Chelsea team.