Chinese heiress, 24, rents five-bedroom Mayfair townhouse for a ‘record-breaking’ £130,000 a MONTH after seeing the property on a Channel 5 documentary because she wanted a ‘pied-à-terre’ while staying in London with her boyfriend

A 24-year-old Chinese heiress is paying a record-breaking £130,000 a month to rent a five-bedroom townhouse in London’s Mayfair after seeing the property on a Channel 5 show.

The unnamed student, rumoured to be the daughter of a billionaire, stumped up £3.1million upfront to secure to tenancy of Culross House, which is adjacent to Hyde Park and worth £30million.

It means she’ll be paying £1.55 million a year in rent – London’s most expensive tenancy ever – for the palatial pad which she’ll use as accommodation while staying in the capital with her boyfriend, housekeeper and personal security team.

The heiress, whose family are believed to have made their fortune from property, fashion and IT in China and Hong Kong, is said to have fallen in love with Culross House after her agent saw the property on Channel 5’s Sally Lindsay’s Posh Sleepovers.

The 8,051 sq ft home is owned by Kam Babaee, a property magnate who is rumoured to be a close friend of Prime Minister Boris Johnson. 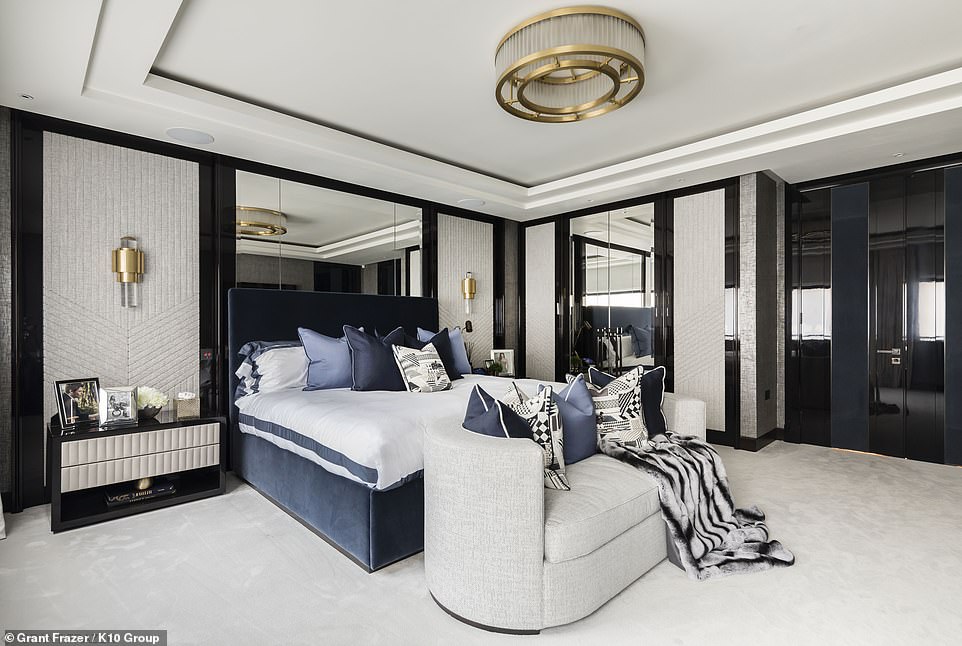 A 24-year-old Chinese heiress has scored London’s most expensive tenancy ever by paying £3.1 million upfront to rent a Mayfair property. The unnamed student, who is rumoured to be heiress to a billionaire’s fortune, has agreed to pay £1.55 million a year to rent Culross House, a newly built townhouse worth £30 million and adjacent to Hyde Park (pictured, the master bedroom) 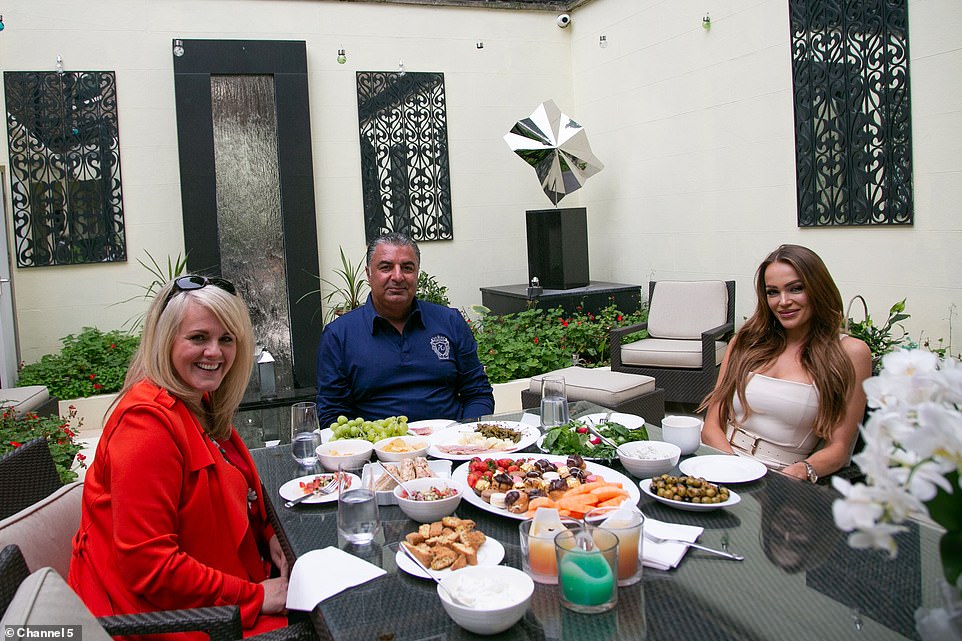 The heiress’s London adviser sent her a video of Culross House after they saw it on the Channel 5 show Sally Lindsay’s Posh Sleepovers (pictured: Sally with Culross House owner Kam Babaee and his partner) 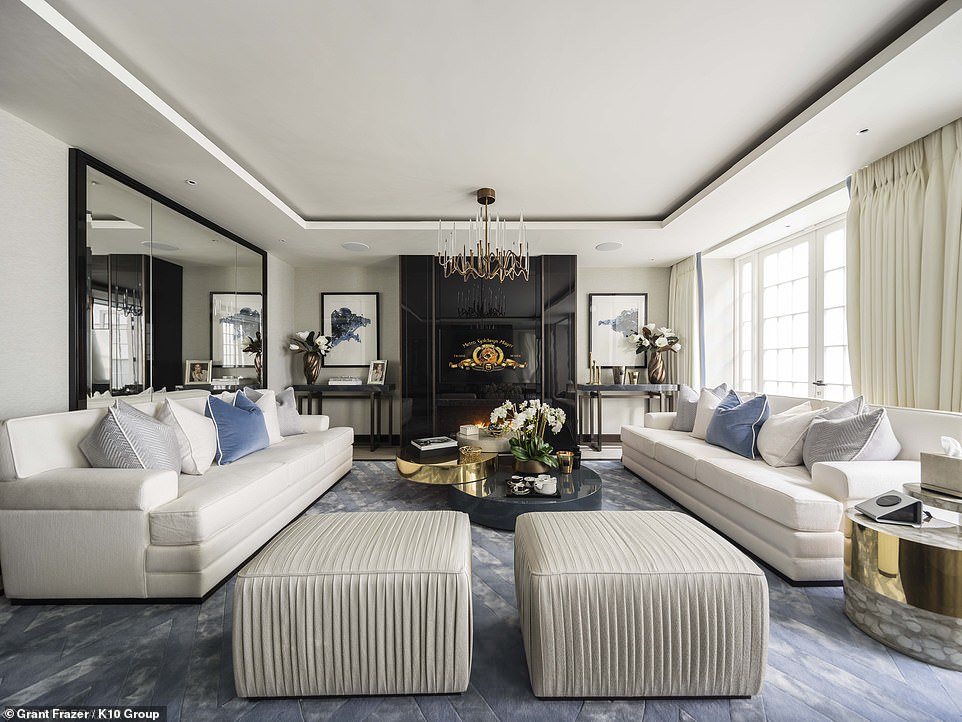 The impressive Mayfair pad includes five bedrooms as well as its own cinema, club room, swimming pool, spa complex and a rear garden.

It is also equipped with a glass lift, a Hermes bedroom suite with bedding and accessories from the fashion house and a marble entrance hall. The new build is located on the site the Coach House of the Earls of Essex, and the agreed rental equates to £4,246 per night.

K10 Group, Kam Babaee’s company, has designed the interiors of Culross House to be a celebration of the ‘Best of British’ classic design, with key rooms inspired by famous five star hotels and VIP venues from around the world.

The heiress said it was her preference to rent a house over a flat due to Covid-19, arguing she needed a dwelling that offers lots of space. She chose Culross House after her agent sent her a Whatsapp video of the property. 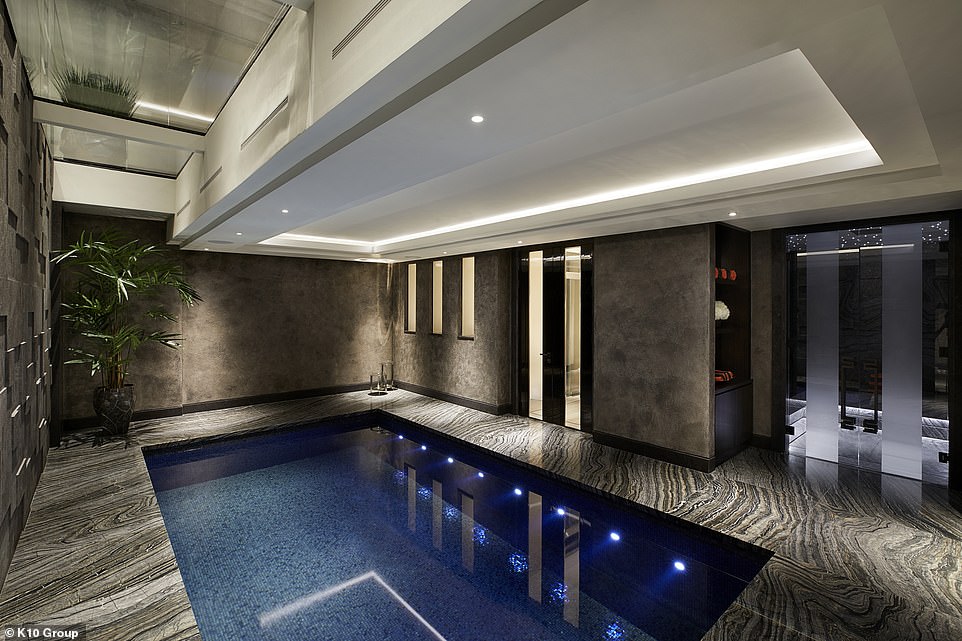 The townhouse, which was estimated to be worth £30 million, is directly adjacent to Hyde Park. The heiress said she wanted a house over a flat due to the Covid-19 pandemic (pictured: the pool) 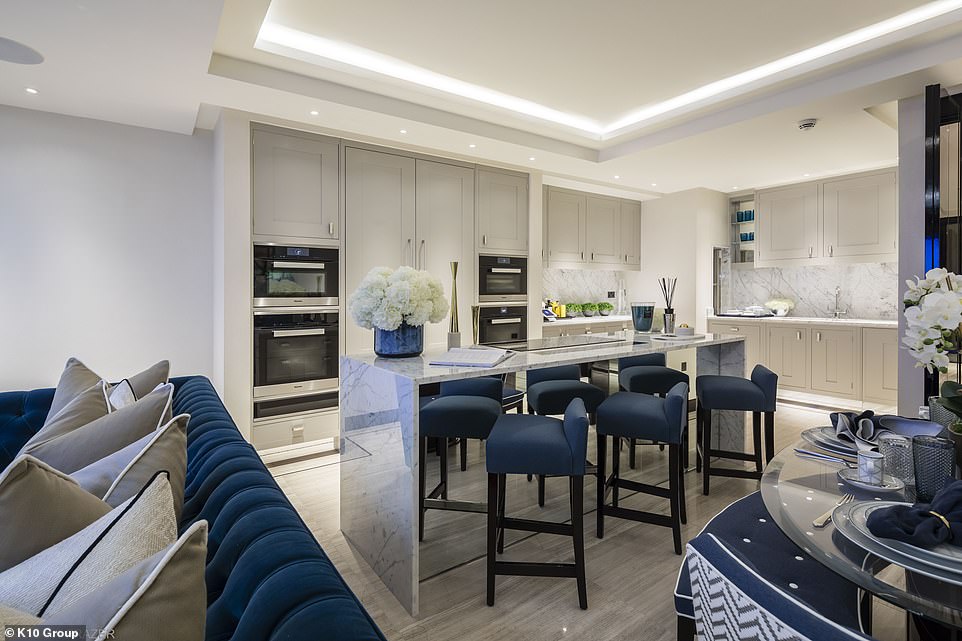 The heiress picked Culross House as her residence while in London with her boyfriend, her housekeeper/cook and her own security team (pictured: the kitchen)

In the show, Sally Lindsay gushed over the magnificent dwelling and even took a dip in the pool after enjoying breakfast in the fully equipped kitchen.

Kam Babaee, Founder & CEO of K10 Group says: ‘K10 Group are delighted to have let Culross House to a fantastic VVIP international family as their Mayfair pied-à-terre. We hope the family enjoy living there over the next few years and we would welcome their stay becoming a “try-before-you-buy” situation through our unique K10 Creative-Finance-Solution.

‘At £3.1 million this rental deal is the largest ever paid to rent a new home in Mayfair and is also the largest upfront payment ever made to let a London home. 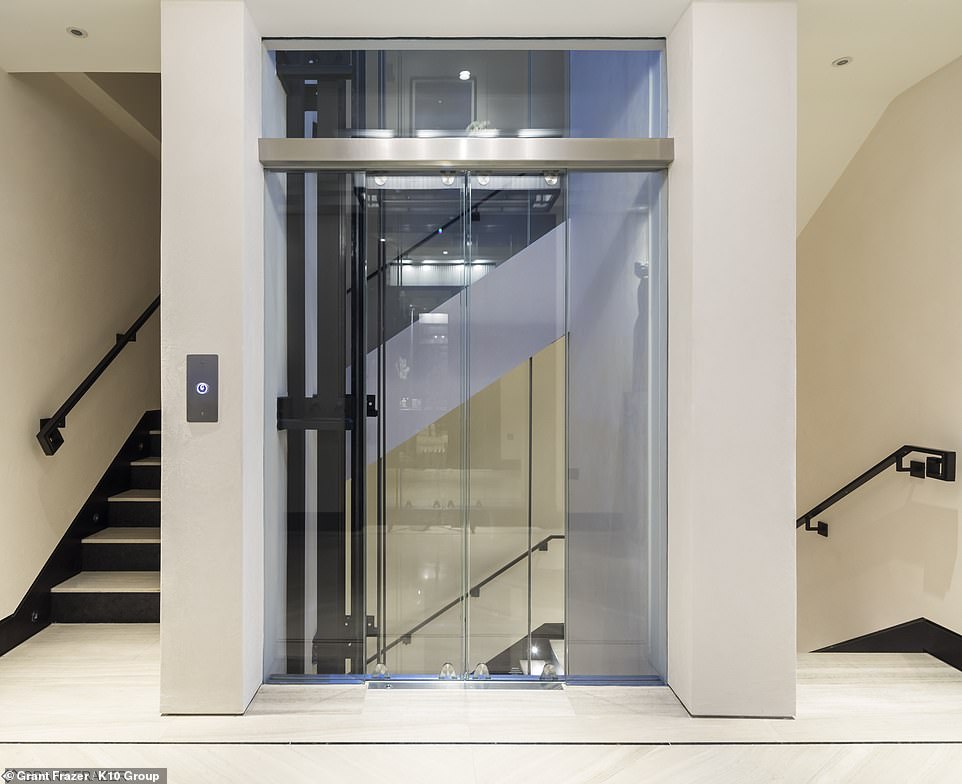 The town house also features a glass lift for guests and its corridors are paved with marble. Pictured: the stairwell of the home built on the site of Coach House of the Earls of Essex 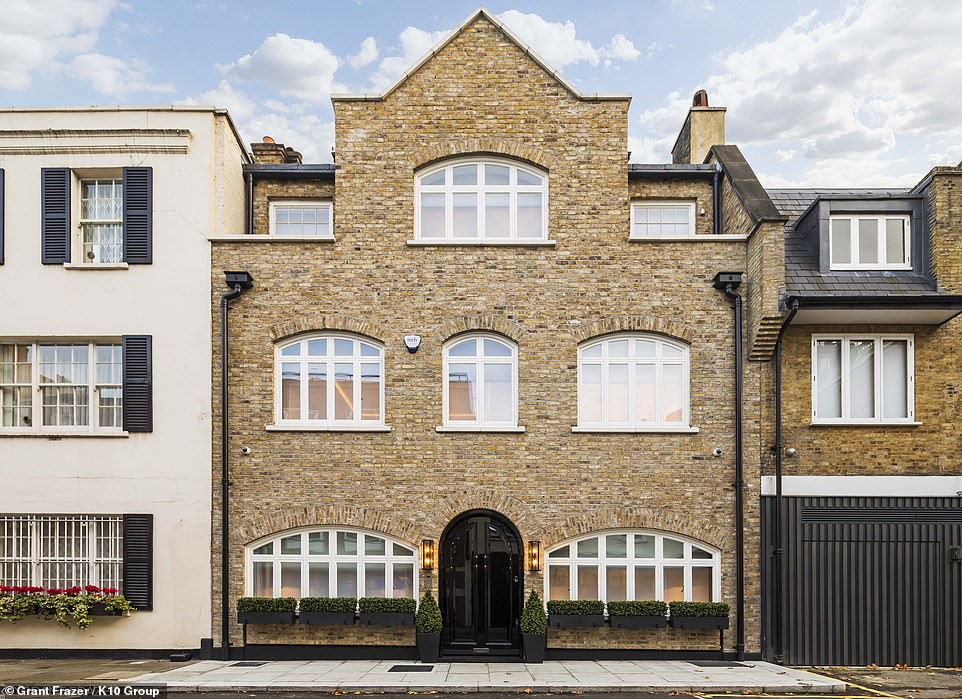 A view of Culross House from the outside. The modern townhouse mansion houses 8,051 sq ft of complete luxury in the heart of London

‘The deal underlines the buoyancy of the super-prime lettings market in London at present and also the quality of our K10 Group mansion and the facilities it provides.

‘When compared to the daily cost of renting a five star hotel suite in Knightsbridge or Mayfair, Culross House provides outstanding value-for-money and far more space and private facilities.’

Kam, who comes from an Iranian family, made his millions working on mega mansions and luxury homes around the world.

He said: ‘K10 Group design and build some of the most outstanding mansions in Central London but we felt that by collaborating with a TV series we could bring our brand to a wider audience.

‘Alongside showcasing Culross House, the TV series gave us an opportunity to provide viewers with an insight into the family behind the brand alongside a view of the lifestyle provided by the shops and cafes of Mayfair. 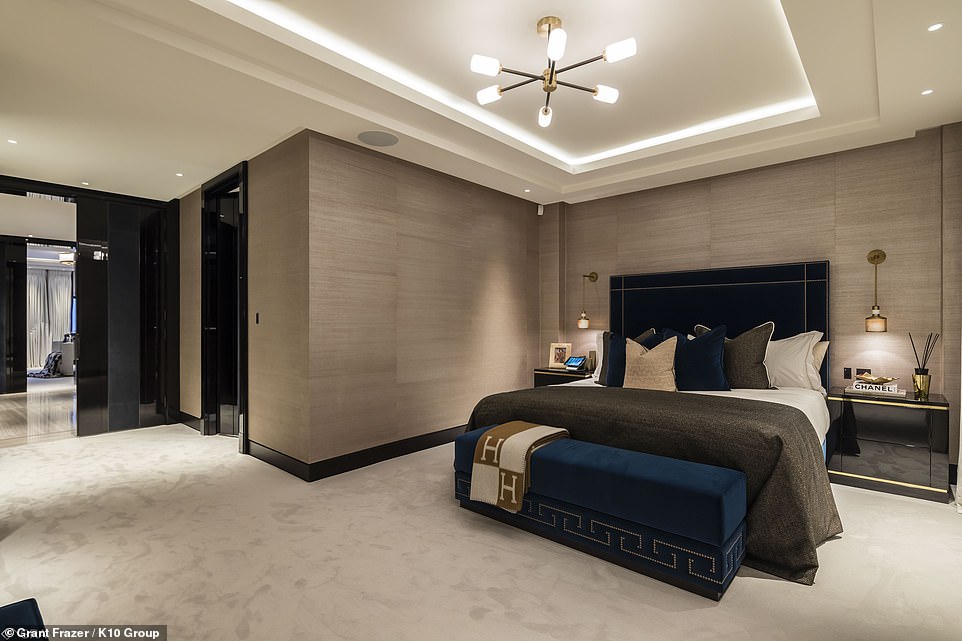 K10 Group designed the interiors of Culross House to be a celebration of the ‘Best of British’ classic design, with key rooms inspired by famous five-star hotels and VIP venues from around the world. Pictured: the Hermes bedroom 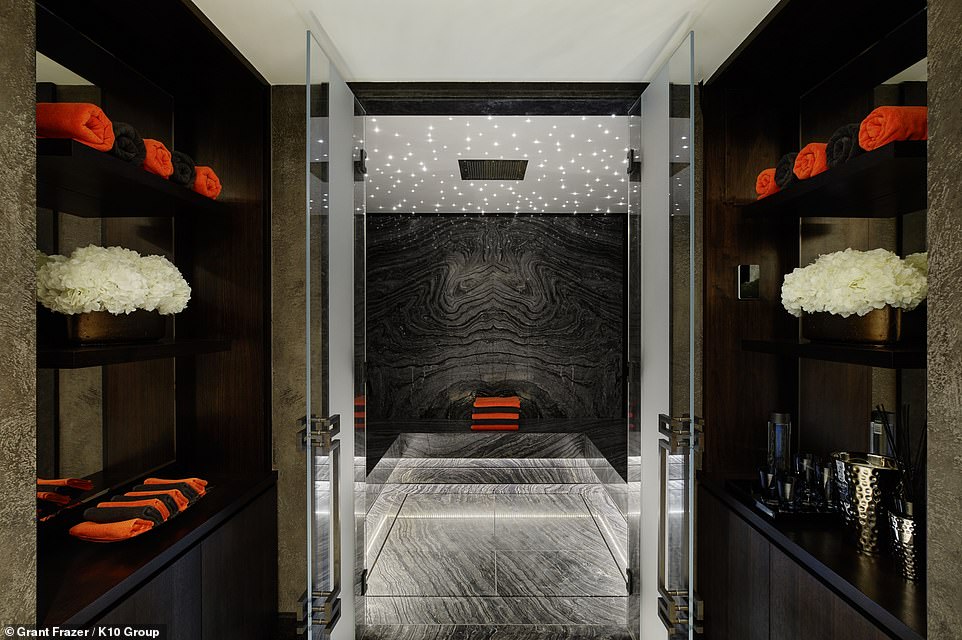 Culross House’s spa. The house is also equipped with a glass lift, a Hermes bedroom suite with bedding and accessories from the fashion house and a marble entrance hall 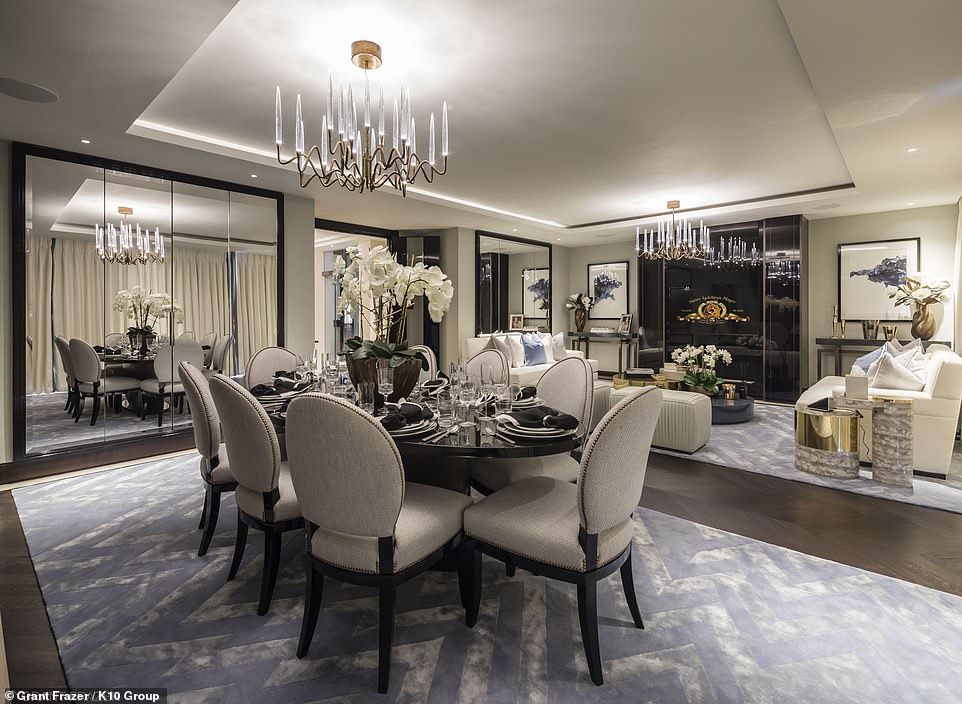 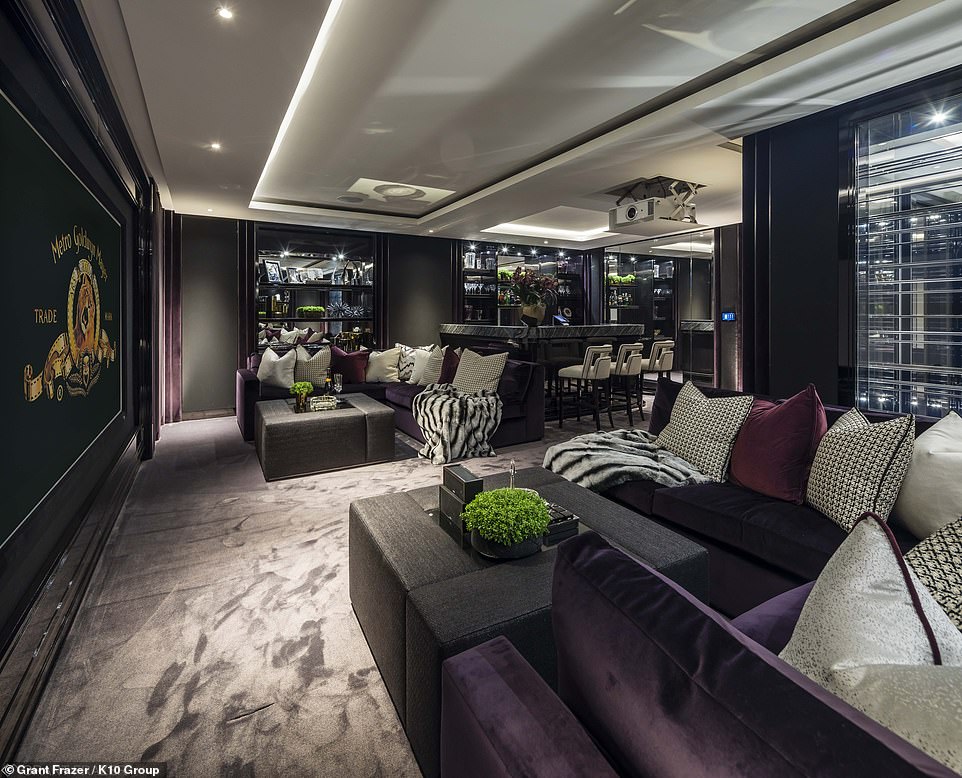 On the show, Sally got to stay at Culross House, which is owned by Kam’s company K10. This newly built mansion is located opposite Hyde Park (pictured: the club room and bar) 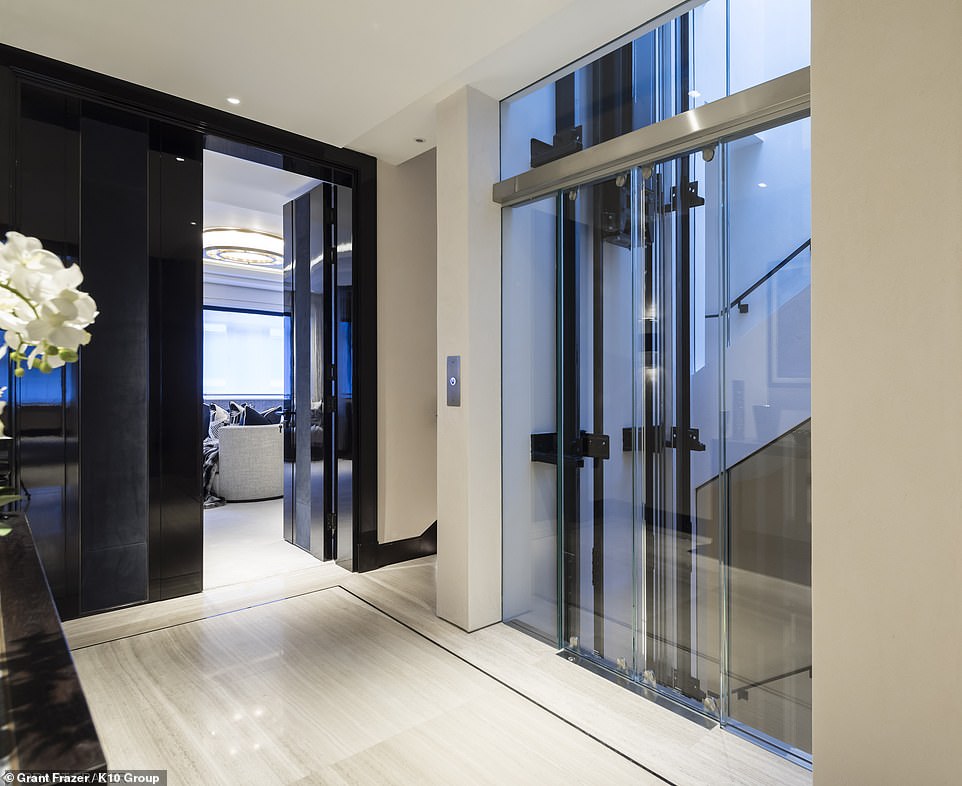 The lift is located right next to Culross House’s cinema room. The clubroom, which is located on the same floor, has its own bar and wine cellar