The impact of coronavirus has prompted a surge in coal-fired power plant construction permits in China, with the Chinese government issuing more permits in a couple of weeks of March than it did all of last year.

The Chinese government issued permits for the construction of 6.6 gigawatts of coal-fired power capacity between March 1 and March 18, compared with 6.3 gigawatts in 2019, according to a new report by the Global Energy Monitor, which tracks coal plant capacity from proposal stage through to completion. 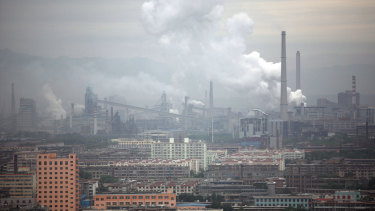 China is leaning more on coal than other nations, the report found.Credit:Bloomberg

The report, Boom and Bust 2020: Tracking The Global Coal Plant Pipeline, found that due to the Morrison government’s pro-coal policies, Australia was second only to China in the world for proposals of new coal power stations, with 3 gigawatts proposed. However, would-be developers were having trouble sourcing finance as banks and lenders toughened their stance against fossil fuels and as prices for new renewable energy continued to fall beneath that for coal-fired generators.

The fifth annual survey of the coal demand – which tracks plants from proposal stage, through permits to completion – found there was a 16 per cent drop in capacity in the pipeline over the past year and a 66 per cent fall since 2015.

Despite the decline in development, coal capacity swelled by 34.1 gigawatts in 2019, the first increase in net capacity since 2015. Nearly two-thirds of newly commissioned capacity was in China.

Outside China, the global coal fleet overall shrank for the second year in a row, as other countries together retired more coal capacity than they commissioned.

“Global power generation from coal fell by a record amount in 2019, as renewable energy grew and power demand slowed down,” said Christine Shearer, lead author and Director of Global Energy Monitor’s Coal Program. “Regardless, the number of new plants added to the grid accelerated, meaning that the world’s coal plants were operated a lot less – more plants generating less power,” she said. “For banks and investors that continue to underwrite new coal plants, this means weakened profitability and increased risk.”

The coronavirus pandemic has also stalled projects worth $US17.1 billion due to labour and supply chain disruption across south and south-east Asia – regions crucial to the future of the Australian thermal coal industry – the report found.

Even more ominously for Australian exporters, the report found that between 2016 and 2019 construction starts fell by more than 85 per cent, from 12.8 GW to 1.8 GW. In India the pre-construction pipeline shrank by half.

Tim Buckley, the director of Energy Finance Studies at the Institute for Energy Economics and Financial Analysis, said that the report confirmed the thermal coal industry was in terminal decline, despite the uptick in permits in China.

He said that over the past two years China had suspended its efforts to curb pollution – and coal energy capacity – in response to the trade war with the United States, and was now leaning even more heavily on coal to stimulate its economy in the face of the coronavirus.

But he said that as a result of that diversion of effort, China was no longer investing in coal plants throughout the Asian region.

China’s coal power capacity was increasingly idle, running at below 50 per cent.

He said that even as it built new coal-fired power plants, China was decommissioning plants built just a decade ago, or well shy of their designed life.