Haggis has always made me nervous. Something about the combination of sheep innards, oatmeal and suet puts me off. But here I am, in this smart dining room, facing a haggis the size of a cricket ball and surrounded by other people happily tucking into their haggises (haggi?). I have to eat it. I raise the fork slowly to my mouth and nibble at a very small piece.

Well, it’s completely delicious and I eat the whole thing. Afterwards, my plate is as clean as Oliver Twist’s bowl. But, then, this is not your average haggis; this is a vegan haggis, since I’m staying in Britain’s first vegan hotel.

You read that right. A vegan hotel. A hotel where only vegan food is served, all the toiletries are vegan, the wine is vegan, the bedding is vegan (no feather duvets here), the shortbread in your minibar is vegan and the resident dogs, Roxy and Lizzie, are vegans, too. 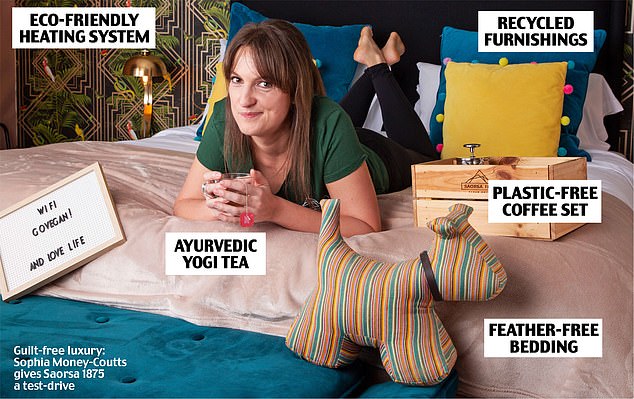 If you’re currently mulling over where to go for your summer holiday, the idea of a vegan hotel may not gladden your heart. You might be sick of hearing about vegans, sick of seeing vegan recipe books everywhere, sick of people banging on about the Greggs vegan sausage roll.

Vegans, a bit like coronavirus, are everywhere this year, even though they form only around 1 per cent of the British population.

Those few who are vegan, however, take it very seriously.

Sandra McLaren-Stewart, the hotel’s Scottish owner, has been vegan for five years and was a vegetarian for ‘a long time’ before that.

She launched the hotel last June, having moved back north after years living in Cambridgeshire with her husband, John, and their three sons, Jack, Callum and Nathan.

‘Moving back to Scotland was always the plan,’ says Sandra in her soft, Scottish lilt, ‘so once the boys were off to university, we thought this was our chance.’

Their intention was to find a place with ‘a few outbuildings to let through Airbnb’. But that idea was eclipsed when, one snowy afternoon just over a year ago, they pulled up in front of the enormous, 11-bedroom house they have now transformed into their hotel.

They called it Saorsa 1875. ‘Saorsa means freedom in Gaelic, and 1875 because that’s when this place was built.’

It’s a whopping Victorian manse with a gothic roof and red window frames, perched on the side of a hill in Pitlochry, the Scottish tourist town in Perthshire much-loved by Queen Victoria. 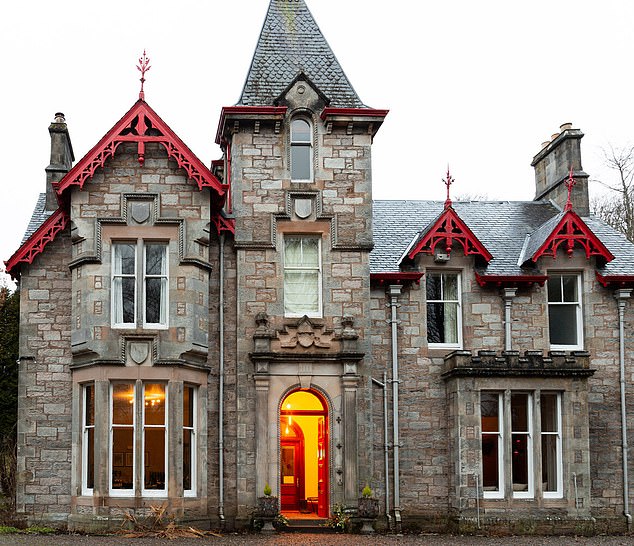 Sandra McLaren-Stewart and her husband John, spent six weeks transforming an 11-bedroom house into a hotel. Pictured: Saorsa 1875 in Pitlochry

‘She came here with her kids and made it fashionable in the same way that Kate and Wills have done in Norfolk,’ says Sandra, ‘so that’s why, back then, other English people started building these houses here.’

It took just six weeks to transform the house into a hotel, overhauling each bedroom and installing a new (eco-friendly) heating system — because the hotel isn’t only vegan, it’s also sustainable.

Sandra has signed up to a scheme called Green Earth Appeal, which means that for every meal that’s served at the hotel, somewhere on the planet a tree is planted, making the hotel’s dining carbon neutral. It would be just the place for Greta Thunberg.

Was it always going to be vegan?

‘I hadn’t thought about it until I started talking to friends and they asked how my hotel was going to work,’ she says, laughing. ‘ “Would I serve meat?” they asked. I said no. I didn’t want it in my house so that was that. It wasn’t a savvy business plan!’

Well, it seems savvy nearly a year on. Although catering to a very niche audience, the hotel has been running at 80 per cent occupancy since it opened last summer.

After greeting me in the wood-panelled hall, illuminated by a bright green Tracey Emin-style neon sign of the hotel’s name, Sandra shows me to my bedroom. There’s a pretty, boutique vibe to each room — in mine, one wall is covered with parrot motif wallpaper, there’s a pastel-coloured armchair and headboard and, in the corner, a kettle with a couple of teabags next to it. 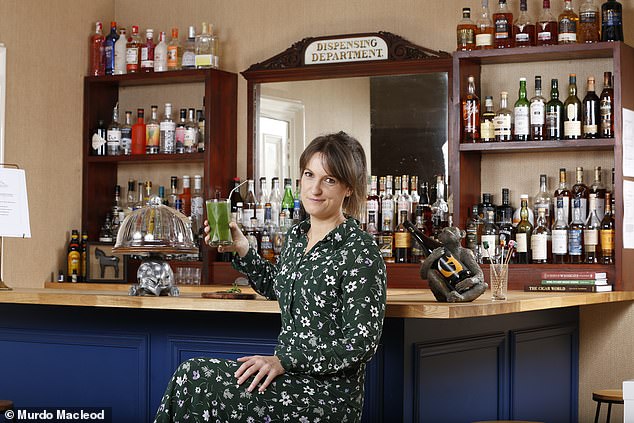 John and Sandra’s son Jack, 26, who is also vegan and was instrumental in setting up the hotel, designed vegan cocktails for the lodging. Pictured: Sophia enjoying a carrot topped smoothie in the bar area

These aren’t just any teabags, they’re special teabags: ‘yogi tea’, made with an Ayurvedic blend of cinnamon, cardamon and ginger.

There are also Fairtrade towels in the bathroom, and the loo paper is from an eco-firm called Who Gives A C**p and made from recycled paper.

Downstairs, there are two main guest areas: the bar and the dining room. Imagine a Soho House bar — velvet sofas, pot plants, a record player and coffee tables piled with interior design books. I order a glass of vegan Merlot and swallow a couple of canapes — small mounds of beetroot dip on discs of rye bread — before dinner.

Did you know that wine is often filtered with egg whites and a substance called isinglass, made from fish swim bladders? I’m sorry to ruin things for you, but it is. My glass arrives and it tastes just as good as normal Merlot.

John insists that running the hotel is mainly his wife’s business, but he helps with drinks and drifts about with his iPad, controlling the music. Grace Jones purrs through the speakers.

Sitting quietly, I observe the other guests: mostly couples, plus a mother and daughter. There are no sandals. No obvious armpit hair. No funny smell. They look fairly normal. Some are holding vegan cocktails, which were designed by John and Sandra’s son, Jack, 26. He’s also vegan and was instrumental in setting up the hotel. 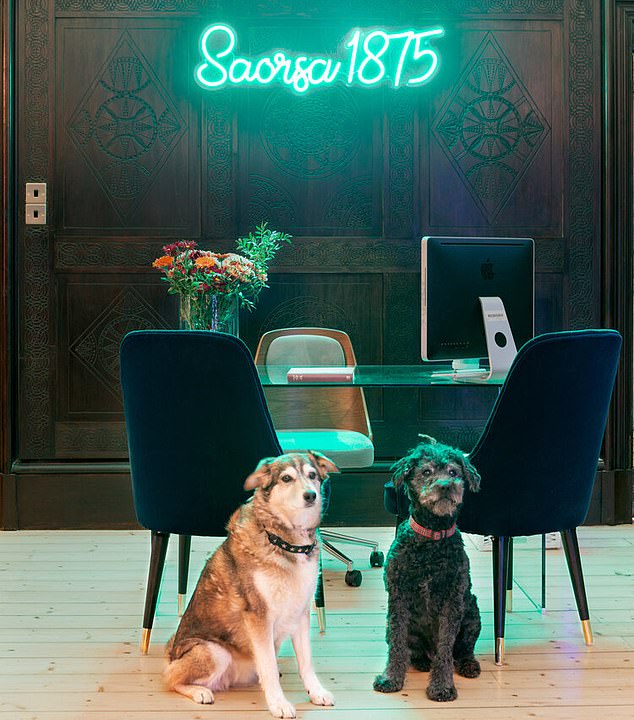 Sophia said most of the guest that she met throughout her stay were vegan, but there was also a few vegetarians. Pictured: Roxy and Lizzie at Saorsa 1875

‘He’s quite the activist,’ Sandra tells me proudly. ‘He came back from travelling a few years ago and went to the Co-op to get bacon and eggs because he’d been in India eating curries for the past two months. And on the way back, he passed a meat wagon outside the local butchers with pig carcasses hanging up.

‘He threw his bag of bacon in the bin before he even got home. That was it. He sat for a whole week at home watching every animal documentary and went cold turkey.’

It’s a convivial scene until Sandra calls us for dinner. In the dining room is one big communal table, which means everyone has to talk to one another. This might be asking too much of some Brits who prefer separate tables.

We sit and introduce ourselves. On both nights I’m there, the majority of guests are vegan, with a few vegetarians thrown in for good measure.

‘I’m, er, actually an omnivore,’ I nervously tell the man I’m sitting beside. He’s called Steven, comes from Fife and is currently working on Glasgow’s first vegan film festival. He and his wife have come here out of curiosity, having been vegan for ‘many’ years. 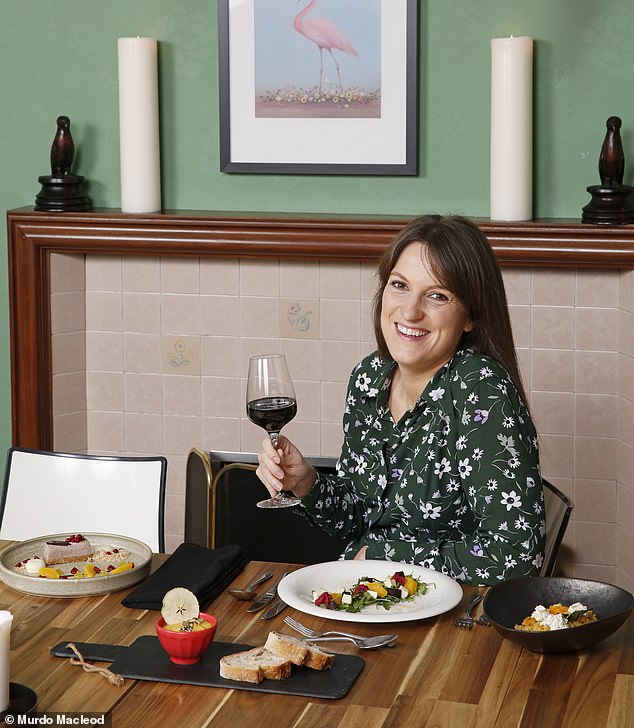 Sophia admits she was worried in advance that she would be left hungry, as she’s long been cynical of vegan foods. Pictured: Sophia seated in the dining room with vegan dishes

Across the table is a woman who works in sustainability in Edinburgh, sitting beside her husband, but I can’t tell you their names because his family are livestock farmers and would ‘disown’ their son if they knew he had visited a vegan establishment.

Every night there’s a five-course dinner, cooked alternately by two chefs: Donna and Deborah, who are both vegans.

The first night we’re given Thai-flavoured falafel, followed by roasted vegetables with a curry mayonnaise, a mozzarella and orange salad, plus spinach and ricotta ravioli, finished off with apple pie and custard.

The second night it’s lentil soup, a selection of antipasti — including a small potato scone, hummus and some olives — a Waldorf salad, the ‘famous’ 1875 haggis with whisky sauce and a chocolate tart.

As a greedy person, I worried in advance that I’d be left hungry. I’ve also long been cynical about some vegan foods: take the vegan burgers you now find at certain chains, which are often made from alarming-sounding ingredients such as pea protein, maltodextrin and so on.

Can they really be much better for you, and the environment, than a burger made from mince? But nothing at Saorsa 1875 is processed. The cheeses are made from soy, cashews and lemon juice; the curry mayonnaise from oat milk, olive oil and lemon juice; and as for the haggis, it’s fashioned from lentils, kidney beans, oats and Sandra’s secret ‘special spice mix’. It’s delicious. 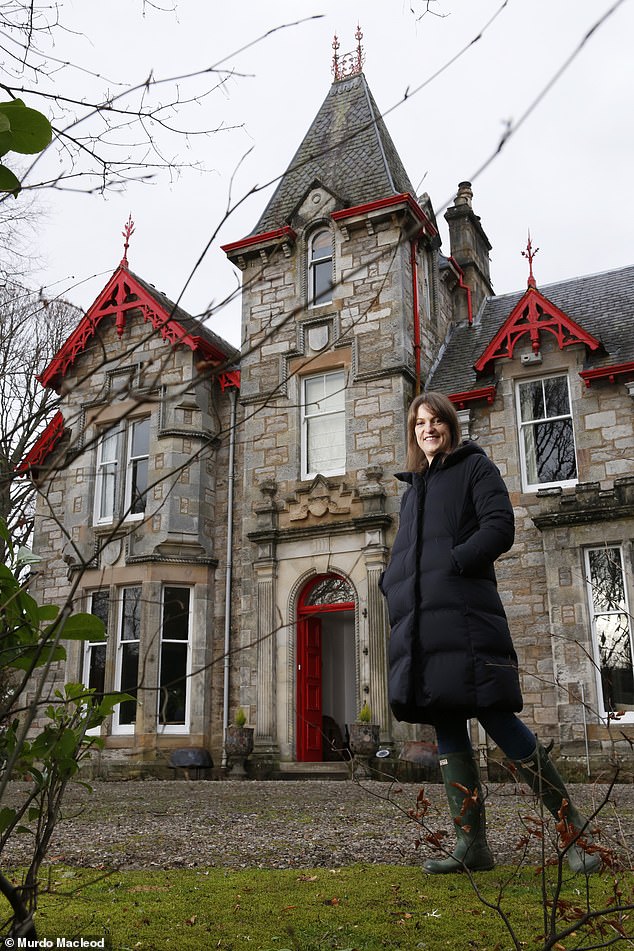 Sophia (pictured) who doubts that she will ever fully give up meat, said the hotel is best suited to vegans looking to meet like-minded souls

Breakfast isn’t bad either. I come down in the morning to find the table laid with vegan cereal, including homemade granola, raspberries and blueberries, a breadbasket beside a toaster and a pot of something called Vego. This is vegan Nutella, made with hazelnut paste and cocoa cream, instead of milk powder.

I ask for a vegan croissant. This is the only food I wouldn’t wholly recommend because it’s made from a spread called Naturli’ (its main ingredient is shea butter) and is too oily. But I didn’t miss eggs and bacon too much.

I couldn’t do it full time, though. Talking to the other guests, I realise it’s their whole lifestyle and belief system.

Steven, like several others, is a vegan for ethical reasons and believes it is wrong to eat animals or support the dairy industry. I almost wish I could feel as strongly as him about it, but I simply don’t.

Like many of us, I’m eating less meat these days for health reasons — and when I do eat it, I buy it from a butcher — but I doubt I’ll ever fully give it up.

Sandra has big plans for the hotel, which include yoga retreats and installing hot tubs.

If you’re a vegan looking to meet like-minded souls, it might be just your thing. But book it early, because they’re busy and already filling up for Christmas.

Last December they served mushroom Wellington on the day itself but, if you ask nicely, you could persuade one of the chefs to knock up a haggis.