The audience age-spread (sadly, a bit like the waist-spread of some of us at the upper end of that range) was wide; the gap between people having fun and other people having fun, even if hair and sweat and drinks were being swung into their faces on the 1 and the 3, was non-existent. Bodies in motion make their own rules.

As indeed does a band that can make a room behave like this while looking like the Year 4 fathers who gave up working the barbecue and put together a scratch group for the primary school fundraiser. Daggy dads go electro! 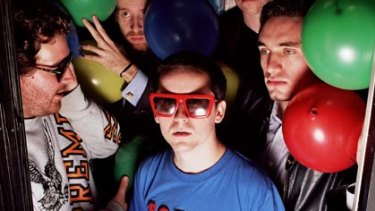 English band Hot Chip have all the moves.

One rule might be that, if you own the room completely, slipping in a couple of songs that are just an open-necked acrylic shirt away from the kind of smooth, west coast, easy groove number you’d hear on classic hits radio – one of them complete with a guitar solo that might have been played by a Steve Lukather or Waddy Wachtel – doesn’t jar, it jells.

So Bathful of Ecstasy (fearlessly dropping deliberately cheesy aphorisms such as “lovers rock and they roll”, while making it feel straight from the heart) and Don’t Deny Your Heart (with a Donna Summer heart under its Doobie Brothers drive) – the aforementioned yacht rock candidates – felt like companions to the urgent nightclub synths, deadpan lines and high stepping bass of Night And Day and the forlorn disco of Flutes.

Another rule: pretty, vulnerable melodies can attach themselves to pulsing movement and tug at your heart as much as your feet. So And I Was A Boy From School and Melody of Love lifted the ambient energy while subtly shading the mood, and Positive dropped a Mancunian melancholy over its Eurodisco shuffle.

One more rule before we go: just because you’ve finished the set with a slinky bit of '70s funk channelled through a Yazoo synth-pop filter like Ready for the Floor, and you intend ending the night with what might easily be your Pet Shop Boys homage, I Feel Better, doesn’t mean you can’t in between them blow out the back of the room with a ridiculous, and ridiculously effective, tear through the electro-metal thundering of the Beastie Boys’ Sabotage.

It’s true, bands in motion make their own rules.