Meet the dietitian on a quest to end teachers’ obsession with kids eating healthy food at school: ‘Respect the child’

A paediatric dietitian is concerned schools have gone ‘too far’ to ensure children eat all the food provided in their lunchboxes.

Dr Kyla Smith, from Perth, Western Australia, is an advocate for healthy eating habits and believes in the ‘division of responsibility’ feeding model, whereby the parent decides when and what a child eats but the child decides how much they consume.

‘Respecting the child’s role at mealtimes helps them to learn to listen to and trust their own body,’ she told the ABC.

‘When caregivers try to decide how much a child should eat, they start taking over the child’s role, and this usually has unintended negative consequences.’

While the healthy eating strategies and policies implemented in schools aim to boost a child’s wellbeing, Dr Smith said it could do more harm than good. 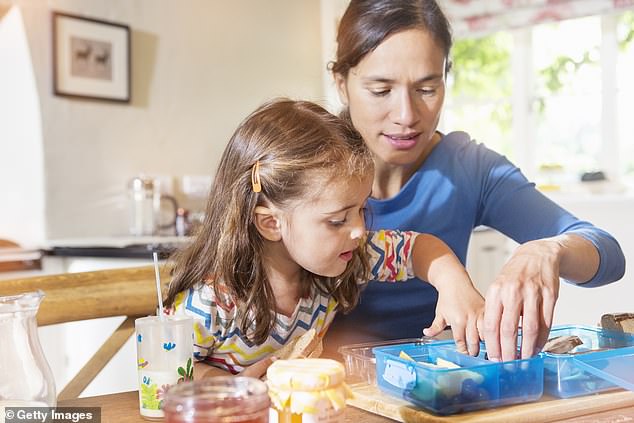 Dr Kyla Smith, from Perth, Western Australia, is an advocate for healthy eating habits and believes in the ‘division of responsibility’ feeding model, whereby the parent decides when and what a child eats but the child decides how much they would like (stock image)

Allowing children to choose from a selection of food that has been provided not only teaches them healthy eating habits, but also allows them to be in tune with their body.

Dr Smith added that some families ensure there’s ‘secret compartments’ in lunchboxes for their children to store food they don’t wish to eat, making it seem like the lunchbox is empty when at school.

According to statistics from the Australian Institute of Health and Welfare, 25 per cent of Australian children and adolescents are obese – making it an adequate measure to promote healthy eating.

But parents and health experts alike agree the child should decide how much they would like to eat from their lunchbox.

Parents joined forces and discussed the issues in a parenting Facebook group, detailing how their children are asking for different types of food in their lunchboxes.

On the other end of the spectrum, some schools have ‘banned’ certain foods from being packed in lunchboxes. 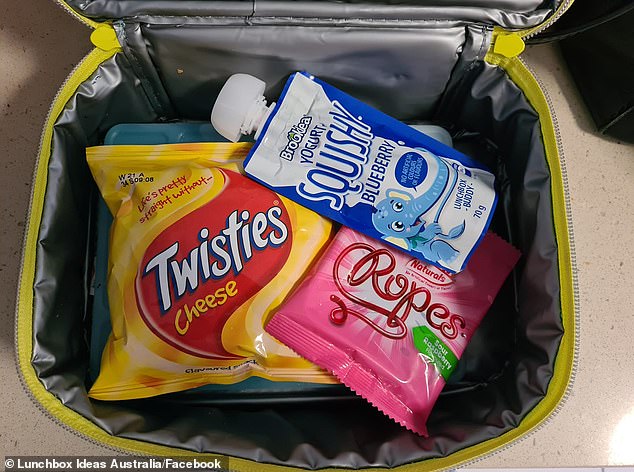 Last year a mum was left feeling disappointed and frustrated after her daughter was told she couldn’t eat anything in her packed lunchbox as it contained ‘too many sweets’.

The doting mum forgot to order the tuckshop food in the morning, so the young girl only ate a fresh banana from the lunchbox and a Vegemite sandwich given to her by someone else.

Inside the packed lunch was a single small bag of Twisties chips, Naturals Ropes lollies, a banana and blueberry yoghurt.

Emily, who wasn’t aware of any new strict school rules regarding food, described the situation on the Lunchbox Ideas Australia Facebook group and asked other parents for advice regarding food policies.

The post was quickly flooded with hundreds of responses from sympathetic parents who encouraged Emily to speak to the teachers at the school.

What does the ideal school lunch sandwich contain?

‘Just picked my daughter up from school and as I’ve asked her about her day, she has reminded me that I forgot to order her tuckshop. I’m so disappointed with myself,’ she captioned the Facebook post.

‘I asked her if she just ate what I had packed her for morning/afternoon tea, but she told me that she only ate her banana, as she was told that she couldn’t eat the rest of her lunch as it was sweets and she’s not allowed sweets.

‘I’m so upset with myself enough, let alone add the frustration that she hasn’t been able to eat her [food] that I’ve packed.’

Besides nuts and dairy products that are often banned from lunchboxes, Emily said she was unaware of any school policy or guideline regarding what should or shouldn’t be packed for lunch.