Australia’s 40-year economic outlook is forecasting dwindling demand for some of the nation’s most valuable exports including coal and natural gas after China, Japan and South Korea unveiled targets to achieve net-zero emissions.

But prominent think tank the Grattan Institute on Monday said it “beggars belief” that the Morrison government’s modelling failed to make projections about the scale of loss of export earnings or the impacts from global warming such as drought and natural disasters. 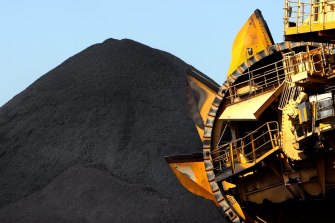 Australia’s mining and energy exports are expected to have hit a record-high of $310 billion this financial year. The nation’s top export, iron ore, accounted for an all-time-high $149 billion, while fossil fuel exports of coal and liquefied natural gas (LNG) together accounted for $71 billion, helping to underpin the economy amid a worsening trade spat with China and a global pandemic.

However, the Treasury’s 2021 Intergenerational Report on Monday warned the emissions-intensive commodities’ export earnings would fall as global efforts to combat climate change accelerated. It noted that countries had committed to net-zero emissions by 2050 including key trading partners Japan and South Korea, while China has committed to carbon neutrality by 2060.

“These commitments by other countries, if fully implemented, are likely to reduce demand for unabated fossil fuels over some decades,” it said.

Grattan Institute chief executive Danielle Wood criticised the landmark report for omitting more detailed projections of the magnitude of the losses, saying it “beggars belief that the federal government hasn’t made any attempt to think about it in a structured way”.

“It just makes no sense to run fiscal and economic scenarios out to 40 years without factoring in climate change,” Ms Wood said.

Ms Wood said the NSW government delivered credible cost estimates in its intergenerational report, released in April. It said more frequent and severe natural disasters fuelled by climate change are forecast to cost NSW between up to $17.2 billion a year by 2061. It also said the state’s coal sales would fall 44 per cent between 2030 and 2061.

Treasurer Josh Frydenberg said “some sectors will need to adjust to falling demand for some exports” as the economy shifted to lower carbon emissions, while new opportunities will open up in other sectors.

“The effects will depend on domestic and global actions, as well as the pace and extent of climate change,” Mr Frydneberg said in his speech launching the report.

An investor coalition backed by funds managing $2 trillion of assets on Monday said climate change loomed as the biggest economic theme of the century and “the outlook is shifting at an extraordinary rate”.

“The figures illustrate the importance of our sector to the economy and I am sure this won’t be lost on the highest levels of government,” he said.

“We will continue to have a good working relationship with Resources Minister Keith Pitt and I am sure the new Cabinet also understands our industry is doing the heavy lifting at a time of great economic uncertainty arising from the pandemic.”

Mr McConville said the latest trade data, which showed mining and energy exports hit an all-time high in the past year, underscored the “importance of the commodities to Australia’s economy”.

Climate advocates on Monday seized on the report to attack the Morrison government for continuing to support the expansion of Australian fossil fuel production including its plans for a “gas-led” economic recovery from COVID-19.

“The Morrison government knows that fossil fuels are on borrowed time but it plans to continue squandering taxpayer money subsidising coal, oil and gas when it knows the market for them is rapidly shrinking and will eventually disappear,” Greenpeace Australia Pacific’s David Ritter said.