Following the original, it’s all Downhill 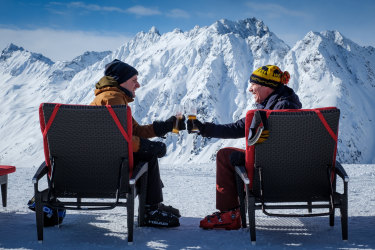 Zach Woods and Will Ferrell in the film Downhill.Credit:Twentieth Century Fox

Force Majeure, directed in 2014 by Sweden's Ruben Ostlund, isn’t a film I would recommend to anybody as a barrel of laughs. It’s a literally and figuratively chilly story, in which an affluent middle-aged couple find themselves at odds while on holiday in the Alps: the approach is satirical, but less broadly so than in Ostlund’s subsequent art world spoof The Square.

Nothing about the film makes it an obvious candidate for an American remake, but for some reason this task has been taken on by Nat Faxon and Jim Rash, comic actors turned filmmakers whose previous feature, The Way, Way Back, was a coming-of-age story set at a water park in Cape Cod.

That the stars of Downhill are Will Ferrell and Julia Louis-Dreyfus (otherwise known as Elaine from Seinfeld) tells you that Faxon and Rash aren’t aiming to replicate their source. Their film is nearly half an hour shorter, and lighter in every sense—but despite some promising elements, it never finds a viable identity of its own.

Once again, the setting is the Alps: Ferrell and Louis-Dreyfus play Pete and Billie Staunton, middle Americans who check into a ski resort with their two pre-adolescent sons (Julian Grey and Ammon Jacob Ford).

From the outset, there are signs of strain between the pair. Why, for instance, is Pete spending so much time on his phone? But they’re determined to enjoy themselves at whatever price, until the threat of natural disaster leads to catastrophe of another kind. 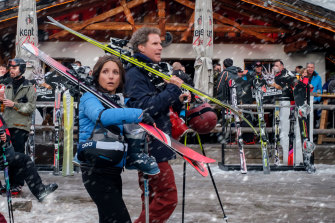 Julia Louis-Dreyfus and Will Ferrell in Downhill.

With the plot of Force Majeure as a basis, the film resembles a string of semi-improvised skits, or a extended pilot for a Netflix sitcom. The studied distance of Ostlund’s visual style has been replaced by a blander, more televisual flatness, with the grandeur of the mountain scenery used as counterpoint to the pettiness of the Stauntons’ squabbles.

The intended tone seems to be cringe comedy, where a grotesque situation is portrayed with enough emotional realism to prompt an agonised sort of laughter. Elaine May perfected this mode in her 1972 film The Heartbreak Kid, also about the disintegration of a vacationing couple.

But for this to work, every nuance has to be just right—and the lack of specificity here suggests that Faxon and Rash haven’t much of their own to say about either long-term marriages or Americans abroad.

The casting is interesting in theory but neither star departs much from their trademark schtick. Ferrell plays a relatively subdued version of his pompous man-baby character, while Louis-Dreyfus keeps up a stream of can-you-believe-this reactions, widening her eyes in incredulity or squinting in suspicion.

The sitcom rhythms leave little room for what the material seems to require: moments when we hang back, watch the characters think and wait to see what emerges.

As a result, whatever anyone may have figured out about the back story of the Stauntons doesn’t come through on screen. Given Billie’s cut-to-the-chase personality, it makes no sense that she could have been married to this bozo for something like two decades and retain any illusions about his level of self-involvement.

The secondary characters are hardly more believable. Miranda Otto, as a flighty, sex-crazed European tourist, is such an old-fashioned stereotype I half-expected the character to be unmasked as an American con woman, or even an Australian one.

Rather more appealing is Zach Woods, from the recently concluded sitcom Silicon Valley, which has proved an uncommonly effective hothouse for the rearing of second bananas.

Even if you can't place Woods by name, he pops up enough in American film and TV that you’ll likely recognise his distinctive presence: the sickly smile of goodwill, the worried eyes, the delivery that under-shoots the mark just enough to catch you off-guard.

Playing a colleague of Pete's who turns up at the resort, Woods comes out with a handful of non-sequiturs peculiar enough to suggest they might be his own ad-libbed contributions.

Like much about the film, his involvement has an arbitrary quality: if his character had been played by a different actor as a boisterous extrovert it would make little difference to any larger design. But if you wind up seeing Downhill, you may decide to take what amusement you can get.