More than two months after an accident left a family devastated, former Kansas City Chiefs assistant coach Britt Reid has been charged with driving while intoxicated. On Monday, the Jackson County Attorney’s Office announced that Reid would be charged with a class D felony after he struck two disabled vehicles on an interstate on-ramp near the Chiefs practice field in Kansas City, Missouri. A class D felony could result in one to seven years of jail time for Reid. Prosecutors also asked for $100,000 in bail, according to Kansas City news station KMBC. 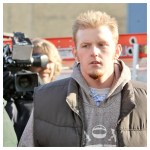 Two children were in the backseat of one of the vehicles — 5-year-old Ariel Young and a 4-year-old cousin. Both children were transported to a local hospital where the cousin was released. But Ariel was diagnosed with a traumatic brain injury and was in a coma for 11 days.

Reid admitted to police on the scene that he had been drinking prior to the accident.

A GoFundMe was established by a close family friend to help raise money for Ariel’s care as well as to provide support to her mother, who is a single mom of three. The fundraiser has earned over half a million dollars at present. She was nonresponsive upon waking from her coma in February and in March was still unable to walk. But on March 27, more details of Ariel’s condition were shared: “Ariel remains in the hospital, she is getting a little better each day but she still has a long road to recovery,” the latest update revealed. Indeed, according to the family’s attorney, Tom Porto, per KSHB Kansas City, Ariel was released from the hospital on April 2, but can’t walk or talk, and requires a feeding tube.

Reid has had previous encounters with the law. In 2008, he was arrested for waving a gun at a driver in a road-rage incident and in 2007 was sentenced to jail time for driving under the influence of a controlled substance.