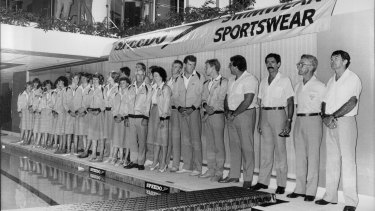 Members of the Australian swimming team for the Los Angeles Olympics, 1984.Credit:Robert Pearce

Australians will be exempt from the Olympic Village ban on alcohol, in the interests of cultural tolerance.

A US spokesman said today that only the Australians and the French would be allowed to bring alcohol into the Olympic villages, which are usually dry areas. 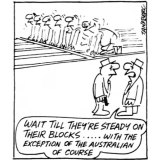 Published in The Age on March 7, 1984Credit:Ron Tandberg

A Los Angeles Olympic Organising Committee worker, George Broder, said the committee had decided on the waiver “in the interests of peace”. Another spokesman said the decision followed an application on behalf of the Australian team. Beer would be regarded as “an official part of the team’s diet,” he said. “We understand how strongly Australians feel about their beer.”

The French will be allowed to bring wine into the villages as part of their diet during the Games, which will start in Los Angeles on 28 July.

Asked whether there were no other ethnic groups who had a similar cultural reliance on alcohol, the spokesman said that if there were, these groups would have to drink with the French or Australians.

It is likely the Australians and the French will not be the only thirsty ones: the average temperature during the Games, which will run during the Los Angeles summer, is expected to be about 28 degrees.