No BRIT Awards would be complete without Harry Styles. The ‘Watermelon Singer’ looked snazzy in his chic suit and sharp hair when he won the award for British Single.

Harry Styles is only nominated for a single BRIT Award, but from what he wore on the red carpet, the 27-year-old singer just won the whole event. Had he not taken home the BRIT for British Single (he’s nominated for “Watermelon Sugar”), Harry will rest easy knowing that he slayed the evening as one of the sharpest dressed Brits in attendance. However — he did win the award, and gave fans a good look at not only his snazzy suit, but his shorter hair. The shaggy locks that have come to define Harry during his Fine Line period have been shorn, giving way to a shorter, cleaner look. The choice is more occupational, as Harry is currently shooting the period piece, My Policeman, in the UK.

There aren’t artists who can light up a red carpet the same way they light up a stage, and Harry has become one of those rare few. During the 2020 BRIT Awards, he donned a gender-bending look ahead of his performance. He walked the carpet in a monochromatic dark blazer and pants combo, one he paired with a plum-colored sweater and dress shirt with an intricate, white-collar. Perhaps the boldest element of his outfit was the pearl necklace he wore. He kept the pearls for later in the evening when he wore a brocade suit – white lace with gold trimmings, matched with similarly colored suspenders — for his performance of “Falling.” 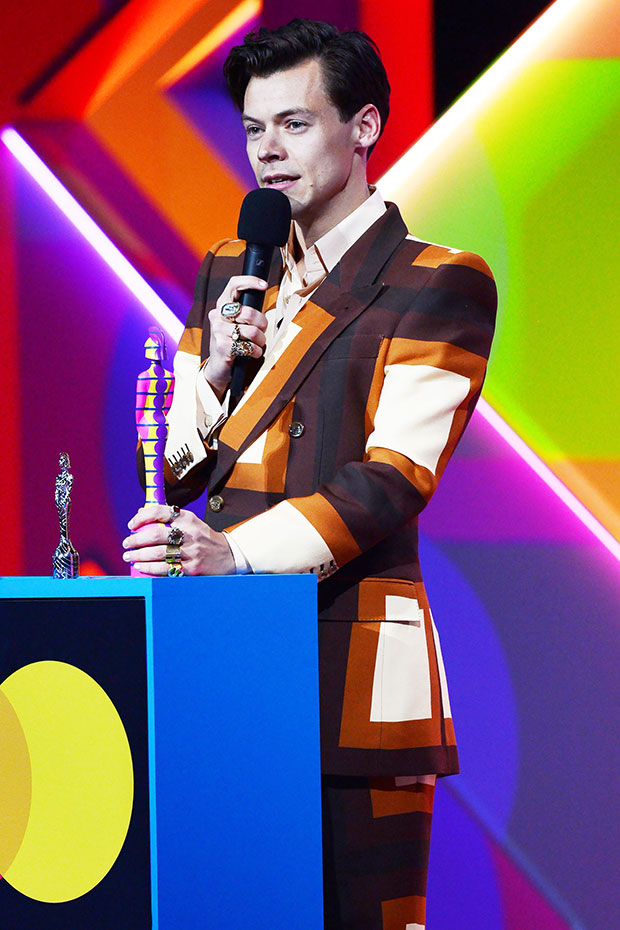 Harry made some waves at the 2020 BRIT Awards – but not from what he was wearing or from his performance. He and his former flame Kendall Jenner reunited at an after party following the ceremony. The couple were photographed hanging out at London’s Standard Hotel – this was in February 2020, right before the COVID-19 pandemic squashed any large gatherings – and it appeared that the two had a fond time chatting with each other. Kendall and Harry dated briefly at the end of 2013 and start of 2014. Neither verbally confirmed that they were romantically entangled but they were seen hanging out several times.

This BRIT Award bash wasn’t the first reunion for Kendall and Harry. The two were spotted together at the 2019 Met Gala, and partied until the early hours. They were photographed leaving the same hotel around 6:00 AM EST. It’s unlikely anything happened – Kendall was herself linked to NBA player Ben Simmons at the time – but it was nice to see these two flames burn the midnight oil, so to speak.

Harry has since gone on to start a relationship with Olivia Wilde at the start of the year. The couple began dating in January, and were recently seen on a romantic date night in London. The couple reportedly looked “smitten” with each other, with a supposed eyewitness to this cozy April 13 affair saying they were “grinning like Cheshire cats at each other all night.”