Right royal payday! Hero boxer forced to sell the George Medal he got for saving Princess Anne’s life in 1974 – so he can fund his own funeral – is ‘blown away’ after it sells for £50,000

The former heavyweight boxer who was awarded the George Medal after saving Princess Anne from a gun-toting kidnapper in 1974 has revealed his shock after it sold at auction for £50,000 – more than £30,00 over its estimated value.

Ronnie Russell, 72, from Bristol, said he was ‘absolutely blown away’ by the price paid by a private collector for the bravery award.

Yesterday, he revealed he was selling it to pay for his own funeral after being struck down by years of ill health including several strokes.

Now, he says the extra money has given him opportunities to do things he never thought he could.

A crowd-funding campaign, set up by kind-hearted strangers, has also raised £1,300 for the pensioner. 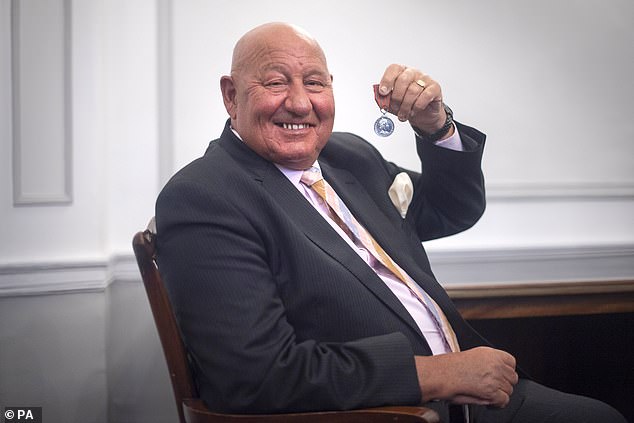 Ronnie Russell, 72, from Bristol, was left in disbelief after the George Medal he was awarded by the Queen after saving Princess Anne from a gun-toting kidnapper in 1974 fetched £50,000 – more than £30,000 over its estimated value 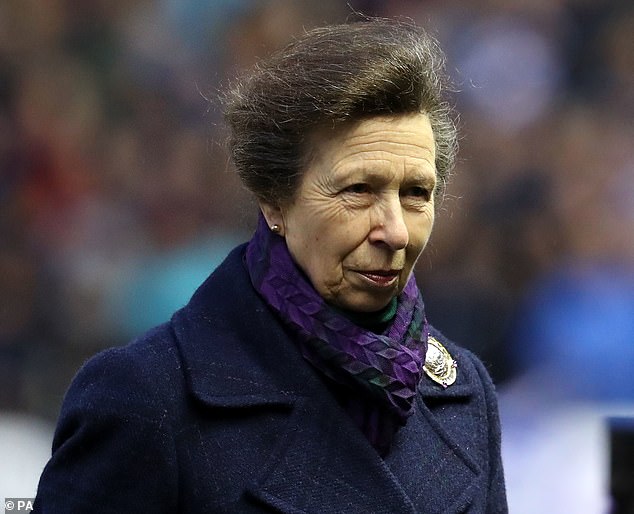 Mr Russell was a 28-year-old 6ft 2in, 17 stone former heavyweight boxer when he halted the kidnap attempt on the princess at The Mall in central London (Pictured: Princess Anne photographed earlier last month at an Edinburgh rugby match) 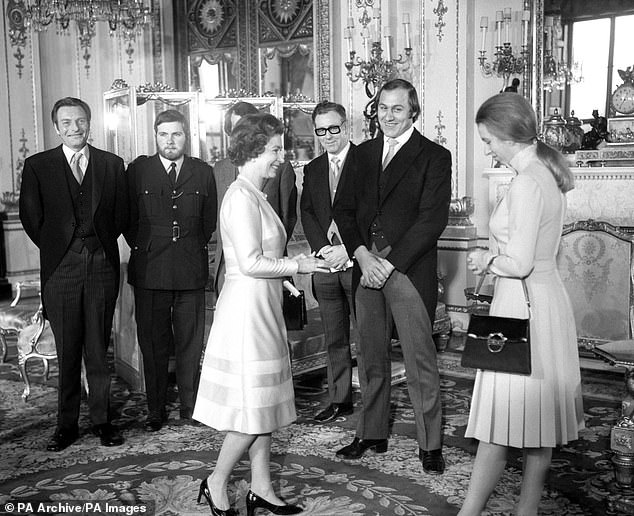 Reward: Ronnie, pictured second from right, with the Queen and Anne ,far right, at Buckingham Palace receiving the medal in the late Seventies

Mr Russell was a 28-year-old 6ft 2in, 17-stone former heavyweight boxer when he stepped in to floor a man trying to kidnap Anne at The Mall in central London, on March 20, 1974. He had been working in Princess Square on Pall Mall nearby before the incident and was on his way home.

The George Medal he went on to receive from the Queen – who also paid off his mortgage at the time – had an estimated value of £15,000 to £20,000 when it went under the hammer at auction yesterday.

The George Medal is the second highest civilian award for gallantry after the George Cross.

Speaking after the sale, Mr Russell said: ‘For something I thought that I would never sell, I never believed it would sell for this amount.

He added: ‘I am absolutely blown away with this price and gives me opportunities to do things that I thought I never thought we could.’

Auctioneer Oliver Pepys, from Dix Noonan added, said during the sale: ‘Ronnie Russell displayed an outstanding act of gallantry, and it is fitting that his George Medal achieved such a fantastic price at today’s auction – a price that not only reflects the wonderful story of courage behind the medal, but also shows how strong the market for medals currently is.’ 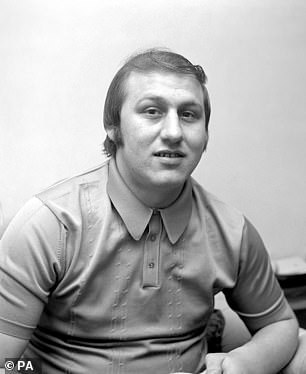 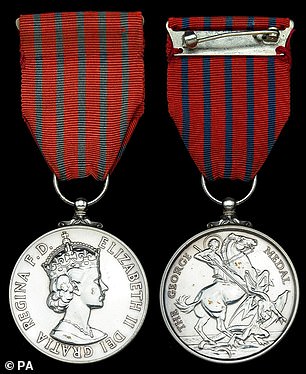 Recalling the terrifying incident in 1974, he said: ‘It is as clear today as it was if it was last night. Once I got into the Mall, I saw a royal car coming down the Mall and it’s got a small blue light on the roof of it.

‘That’s only on when there is a member of the royal family in the car. I saw the car and thought “I wonder who this is”.’

A few minutes later a car drove towards him by Admiralty Arch, which Mr Russell initially thought was an angry driver.

However, when he realised it was more serious, he turned back to intervene, acting as Princess Anne’s “human shield” as Ball tried to kidnap the royal.’

He said of the royal: ‘She was the calmest person of the whole event. She just kept sitting there without getting angry or upset. 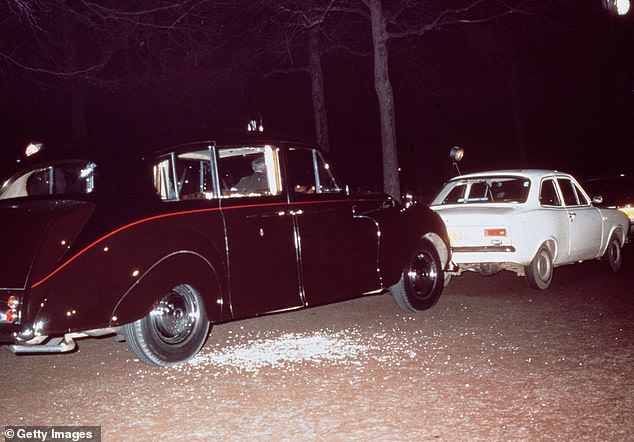 Ian Ball had blocked the princess’s car with his own as it drove along the Mall back to Buckingham Palace, and fired a series of shots through the rear window as he tried to kidnap Princess Anne

‘She just went “go away you silly man”. That was it. That was all she said to him, without any excitement or shouting.’

‘I said “come this way Anne”, you’ll be safe. I got her by her forearms and lifted her out in front of me. I said he’s going to have to go through me to get to you.’

‘He then ran round behind me but I don’t know that. I turn around and he’s looking at me, glaring at me with the gun. It’s you or me now.’

Russell then punched the assailant to the ground, leaving him ‘flat on the floor’. Police arrived shortly afterwards. 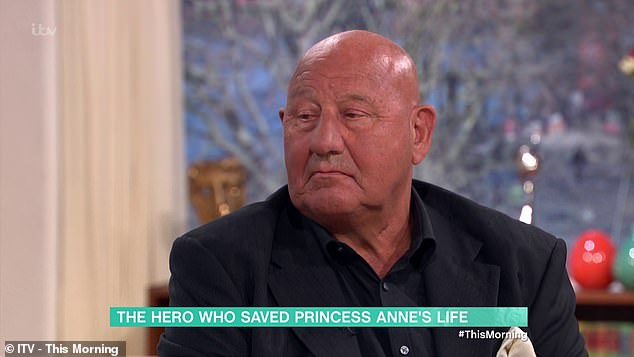 Appearing on This Morning today, he admitted that while he ‘vowed’ to never sell the medal, he did not want to be left in a situation where his family would be forced to pay for his funeral

The silver medal has a portrait of the Queen’s head on one side and a scene showing St George Slaying a dragon on the other. It is one of only 600 George Medals awarded since World War Two.

Mr Russell, who now lives in a council house in Bristol with his wife explained his decision to sell, saying: ‘I’ve just been so ill for the last few years. I have to go and have a drip every 21 days.

‘I want to thank my brother, Terry, for looking after me during my illness. I’d have been in serious trouble if it weren’t for him.’ 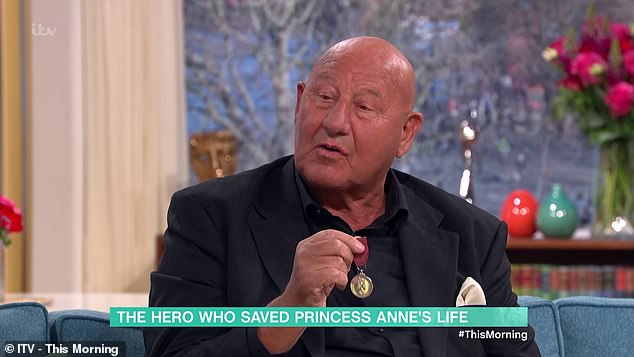 Russell told of how calm Anne was in the situation, ‘She was fantastic’, said Russell,’ A lot of people don’t believe me

Appearing on This Morning yesterday, Russell admitted that while he ‘vowed’ to never sell the medal, he did not want to be left in a situation where his family would be forced to pay for his funeral when he does eventually pass away.

‘I vowed I would never sell it. I felt it was a betrayal to the Queen. But I’ve had support from my family. I don’t want a situation where everyone is putting money in.

‘I feel very sad about it. I was honored receiving it, but I have been forced into the situation. I’ve been particularly unwell now. ‘

Ronnie also spoke of the heartwarming chat he had with the Queen when he was given the award at Buckingham Palace.

He told: ‘She said: ‘This medal thanks you as The Queen, but I want to thank you as Anne’s mother”.