The commercial rights holders for global animation sensation Bluey have given one of Melbourne’s most expensive private schools approval to use the beloved cartoon characters to promote itself to prospective parents.

It is the first time an Australian school has been given permission to use the Bluey brand for self-promotion. 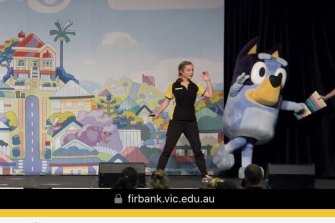 A still from Firbank Grammar’s Facebook page, promoting an upcoming appearance of Bluey.

Brighton-based Firbank Grammar School, which charges annual fees of $18,165 in prep and $32,727 in year 12, will put on a “live and interactive” Bluey performance with paid actors on Saturday, at which parents can also learn about the school’s early primary and prep programs.

The college denied it was using Bluey as a lure for prospective parents. A Firbank Grammar spokesperson said the public event was merely a chance for children to see a show and do colouring-in activities.

“Enjoy a live and interactive experience with Bluey!” the note states. 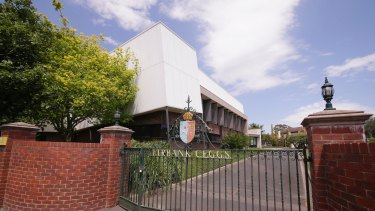 “Have a fun day out and learn all about Firbank’s Early Primary Years and Prep programs. Register below as spaces are limited, at either our Sandringham Coed or Brighton Girls campus.”

Publicist and mother of two Sarah Finney learned of the event when it appeared as a sponsored post in her Facebook feed.

Ms Finney said she was concerned that the Bluey brand was being used to promote a private school.

“Bluey is as beloved as Play School and Bananas in Pyjamas and you wouldn’t see them in this kind of context,” Ms Finney said.

She argued Bluey’s rapid rise may have clouded the show’s creators’ judgment on who to partner with.

’It’s all happened so fast and perhaps there hasn’t been the checks and balances, or enough guidance, on what they will or won’t do and where they will take the brand.”

The event will run ahead of the long-awaited stage show Bluey’s Big Play, which is scheduled to run at the Melbourne Arts Centre next month after being postponed due to the pandemic. Tickets are $49.40 each, both for adults and children aged two and older.

Bluey’s creators, Ludo Studios, referred questions to the BBC Studios, which holds the commercial rights to the popular show.

A spokesperson for the BBC stressed that the live show at Firbank was not the same production.

“The Bluey costume characters are appearing at a meet and greet event as part of an open day for Firbank Grammar,” the spokesperson said.

They said Firbank was the first Australian school to use Bluey at a school event.

“The costume characters haven’t previously been booked by any schools, as this is the first application HVK Productions has had from a school.”

HVK Productions is a company that holds the licence to run meet-and-greet events with Bluey.

Dr Emma Rowe, an education expert with Deakin University, said it was not unusual for private schools to use promotional lures for enrolments, given the high tuition fees parents are asked to pay.

But she said it was also a matter of public interest given non-government schools also receive significant government funding.

“As schools in Australia are positioned within a competitive context – that is, they compete with one another for students and essentially for funding – it is understandable that schools are seeking leverage within this competitive market,” Dr Rowe said.

But some of the most sought after high-fee private schools do not advertise at all, relying instead on their history, prestige and the high socioeconomic status of the student cohort to create a sense of exclusivity, she said.

Our Morning Edition newsletter is a curated guide to the most important and interesting stories, analysis and insights. Sign up here.