How the Violent Femmes bassist found himself playing Paganini

“If they want me to play, why would I say no to that? Being surrounded by some of the best musicians in the whole country.”

About eight years ago, Violent Femmes bassist Brian Ritchie got an unexpected call – from Richard Tognetti, artistic director of the Australian Chamber Orchestra. 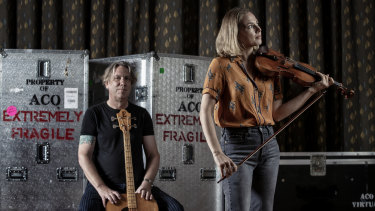 Tognetti was taking the ACO’S experimental electro-acoustic band ACO Underground to a festival in Slovenia and wanted Ritchie to join them.

“I was a little bit surprised,” Ritchie says. “They wanted to have some rock grit and sounds in the crossover works. I decided it was worth trying.”

Ritchie has no classical training – he’s self-taught on the acoustic bass guitar. Even as a classical music audience member he’s felt out of place – as a teenager he was told off by Spanish virtuoso guitarist Andres Segovia “because he didn’t like the look of me as I was going to my seat”.

He can read music but not like these classical professionals, who can sight read a score and mainline it to their instruments. Some of the ACO Underground songs had chord charts, so he could do what he usually does, make his way instinctively around them.

But for others, he had to knuckle down and play the notes in front of him.

“Ninety-nine per cent of my life I’ve been making up my own parts,” Ritchie says. “It’s a humbling process, not just having to grapple with it musically but having to give up that role and say, ‘OK, this is not what I want to play, it’s what you want me to play’. It’s been very good for me. I think I needed to experience that. It’s fun to be a soldier. I’m usually the general or the dictator or something.

“But music is music and this project is an example of that. There are very few people in the world who listen to just one genre. Most intelligent music listeners, they listen to a lot of different music and I think we’re going to be seeing more and more projects like [this] which span a large terrain.”

It’s been a few years since ACO Underground last performed in Sydney – and this tour, surprisingly, marks their very first visit to Melbourne.

Says Ritchie: “Now that’s actually surprisingly – the bass playing anyway – is surprisingly close to what I’m used to playing in punk rock. Very driving. A lot of the baroque music has more of a punk feel than a lot of rock music does.”

But that doesn’t make it easy.

“We’re doing Paganini’s Caprice No.5 and that’s going along at quite a clip and I’m playing more chords in that one song than I usually do in a whole concert with the Violent Femmes. I just fasten my seatbelt and hold on and hope that I don’t fall out.”

He’s in awe of ACO’s principal violin, Satu Vanska, who leads the group (the admiration is mutual – Vanska says Ritchie’s intuitive bass is “raspy and dirty, something you’d never find in a classically trained musician”).

Vanska came up with ACOU because she wanted to take their music to new, more relaxed venues and tap into new audiences who might find concert halls daunting.

“And it’s a great opportunity for us to explore different creative avenues,” she says.

They cover Nine Inch Nails. In the past they’ve played with Radiohead guitarist Jonny Greenwood.

“When I started composing I was young and I wanted to be part of what is happening in the 21st century,” Vanska says. “Sometimes in the classical music world, in the concert hall the formula is very set in stone. It’s quite a serious way of going into music.”

Of course, there’s still a place for the traditional way to hear classical music.

“It’s really beautiful to go somewhere and have that silence … people enjoy the concert hall experience, a place where you turn off your phone and don’t have that distraction … people like to concentrate on one thing because it’s so rare for us now.”

But ACOU is something else.

“I wanted to create an atmosphere where you could drink a beer at the same time as you’re listening to Bach. The beer tastes better and the Bach probably sounds better.”