I weaseled my way into 3 ultra-exclusive after-parties for top YouTube and TikTok stars. Here's what it's really like inside the convention celebrations.

ORLANDO, Fla. – Once I found out I was headed to Florida for Playlist Live, I started to scheme. Getting access to creators, to the behind-the-scenes lounges for VIP pass-holders, and to the exclusive after-parties isn't promised to members of the media, so I knew I was going to have to be sneaky.

Playlist Live is one of the biggest YouTube and social media conventions on the planet. This year, more than 13,000 influencer-obsessed fans flooded a Marriott resort in Orlando, just minutes away from Disney World, to meet their favorite YouTubers and TikTokers.

During the day, fans with Playlist passes (and me, with my media badge and camera) could wander around the hotel and convention center, but they couldn't get back to any of the heavily patrolled creator lounges. At night, the security became even more intense, preventing fans from getting into the ultra-exclusive late-night parties for creators and industry insiders.

Fortunately, I had a few friends to help me get to each of the parties. And I was able to weasel my way into each one. Here's how I did it – and more importantly, here's what I experienced once I was inside.

My first task each day at the convention was getting into the creator lounges, and I needed creators and brands to help me. 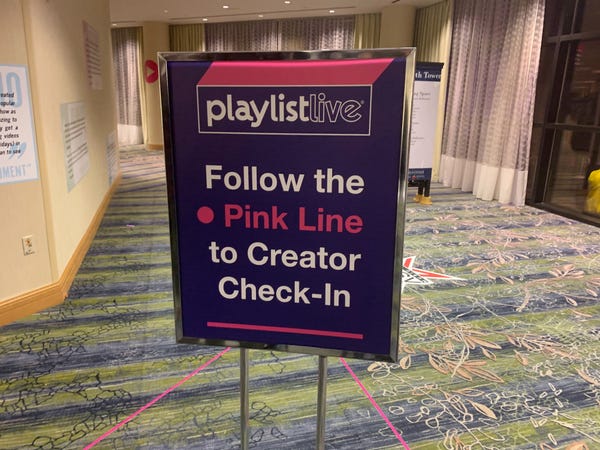 At Playlist, there's a heavy emphasis on fan-free areas for creators and industry insiders – like sponsors, management teams, and brand owners – to get away from the crowds.

Unfortunately, I couldn't access those areas on my own. A media badge is basically just a regular weekend pass with your publication name on it. But on Friday, a very helpful brand representative loaned me a blue sponsor badge, which gave me instant access everywhere.

Once inside the creator lounge – the "TikTok motel," specifically – I was able to network and chat with people who had access to the credentials I needed to get into the Friday night party.

On Saturday, I spent most of the day with YouTuber Tana Mongeau and her team, who let me borrow a creator pass to get into her hotel room.

Every party had different credentials, and I hedged some of them, but at the very least I had to get my hands on each night's themed wristband. 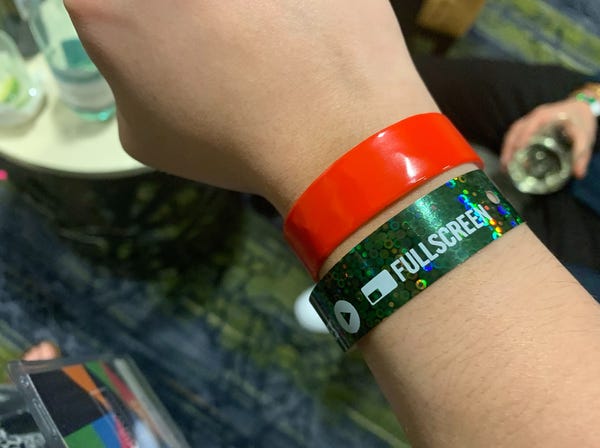 I couldn't hang onto any of the creator or sponsor badges I was able to borrow throughout the weekend, but getting the wristbands was crucial. That was where knowing featured creator Elijah Daniel came in handy, since he was able to convince the wristband distributors that I needed them.

Technically, each party guest needed the following: a VIP access badge (these could be creator badges, sponsor badges, or simply blue "Access" badges), whatever wristband was needed for each party, an ID proving you were at least 21 (this was to get drink tickets – kids and teens with VIP access were allowed into the parties), and a Marriott hotel key.

I wasn't even staying in the Marriott, but by assimilating myself into Mongeau and Daniel's group and waving my wristband around, I managed to get through the doors each night.

To get to the parties, guests had to take golf carts. 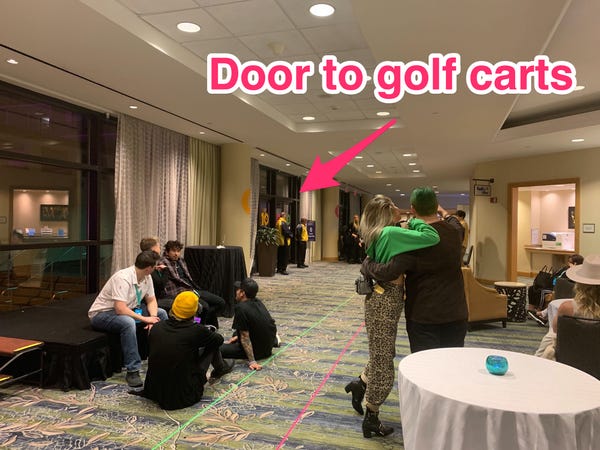 Given the fan-free nature of the parties, and the fact that they were held in a ballroom inside the Marriott where all the fans were staying, the Playlist coordinators took steps to make sure fans couldn't figure out where the ballroom was.

The golf carts were in use throughout the weekend, taking featured creators and their teams to and from their panels and meet-and-greets. 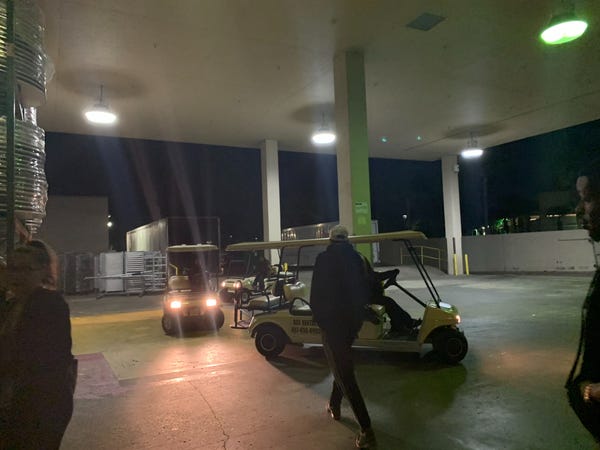 Riding the golf carts was mostly very cold. The Orlando weather dipped into the 40s at night during Playlist weekend, and most of the party guests were dressed up for the evening – sans any kind of coat or jacket. Zipping around felt very exclusive, but also somewhat torturous, given the weather.

Once we pulled around the back of the ballroom, we had to walk through service hallways to get there. 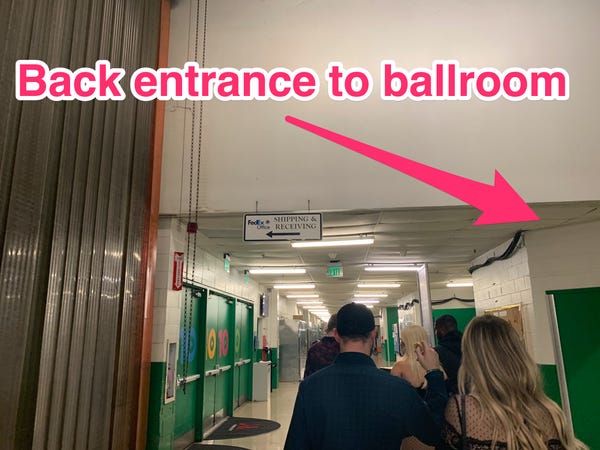 On Friday night, my group of party attendees got lost at first wandering around the service hallways. We ended up by the kitchen, and had to back-track to the discrete ballroom entrance. Then we had to go through another security checkpoint, at which point we were given the all-clear to head into the party.

On Friday, I showed up as early as I could, but it took another hour or two for most of the guests to arrive. 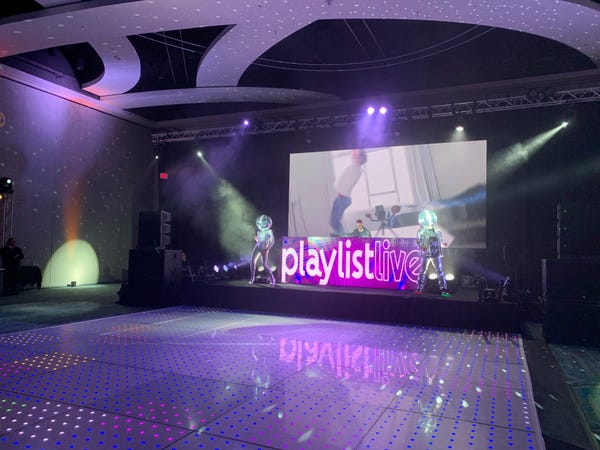 The Friday night party was sponsored by JOBY, a company that makes tripods – very fitting for an exclusive YouTuber party. On Saturday, the party theme was to celebrate the tenth anniversary of Playlist Live, and it was sponsored by Fullscreen, the YouTube management and touring company.

On Friday, I got the party at about 11 p.m. It had technically started at 10 p.m., but the security check for the golf carts took a while longer than expected. At first, almost no one was there, and it was kind of eerie to survey the elaborate decor and onstage dancers, who were performing, at that point, for nobody.

But the parties ran until 2 a.m., and the floor completely filled up eventually. I got to come face-to-face with pretty much every top featured creator at the convention, along with their managers, assistants, PR people, industry insiders, and more.

The Friday night dancers had disco balls on their heads. 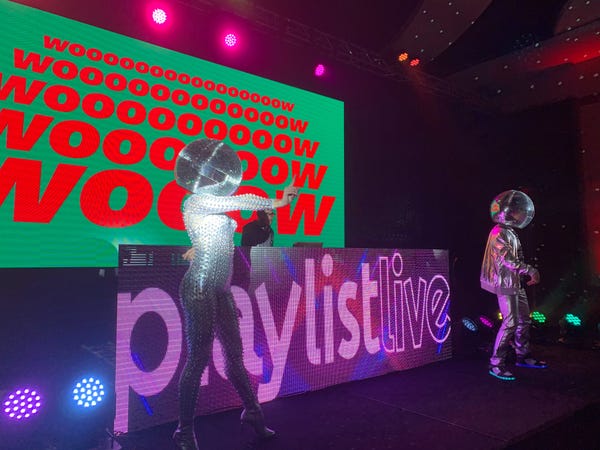 I was really afraid the disco ball dancers would fall off the stage, given their lack of visibility. This fear never came to fruition, and the dancers traded out by the end of the night. I also wondered if they were uncomfortable – but we didn't get a chance to chat.

Some of the younger party guests demonstrated their flashy dance moves. 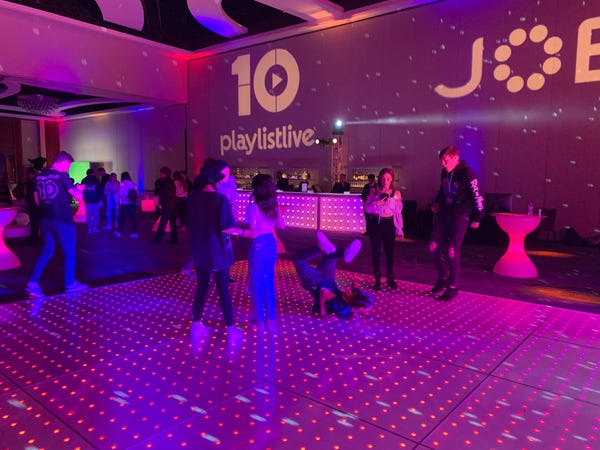 As I lingered around the main stage, I noticed some younger guests approach the dance floor and begin performing the worm. Some of them filmed their dance moves. Who were they? Almost impossible to tell. I have a significantly higher TikTok IQ than most people above the age of 21, but it's still hard to identify them in the dark.

The JOBY party planners placed a lot of props around the room, probably to entice influencers to take photos with their logos in the background. 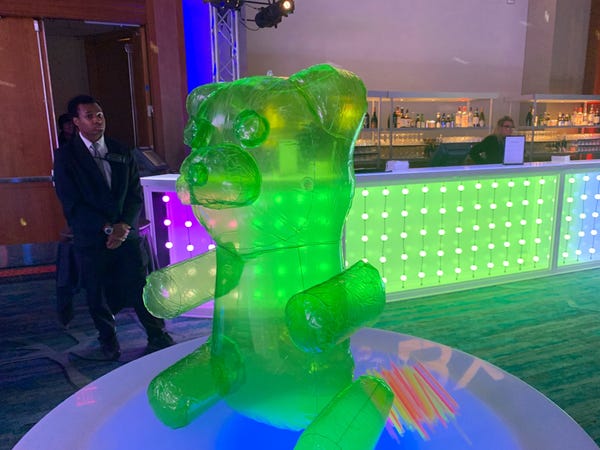 As the party started to fill up, I realized I was surrounded by teenagers, glow sticks, the occasional adult, and alcohol. This combination was very distinctly reminiscent of high school prom. I vividly began to relive my own high school prom as I spotted 15-year-old TikTok star Charli D'Amelio weave her way through the crowd.

Of course, my prom didn't serve free alcohol and I didn't get to meet James Charles there, so this experience was a bit different. Also, there was no corsage this time around. 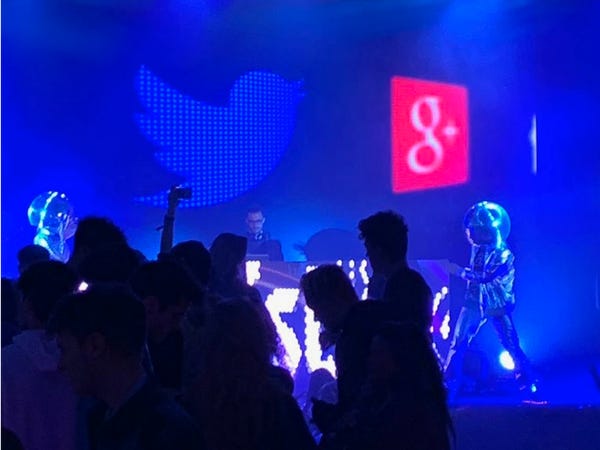 Behind the dancers onstage, various social media logos were projected onto a giant screen throughout the night – a distinct reminder of why we were all there in the first place. Seeing the retro Google+ logo hover above the crowd was still very bizarre, though.

"This feels like cruise ship entertainment," Daniel said at one point. Perhaps a very weird social media-themed cruise excursion will at one point feature a giant Twitter bird on a screen, too.

After I had seen enough of the crowd, I wandered over to the bar to take advantage of my free drink tickets. 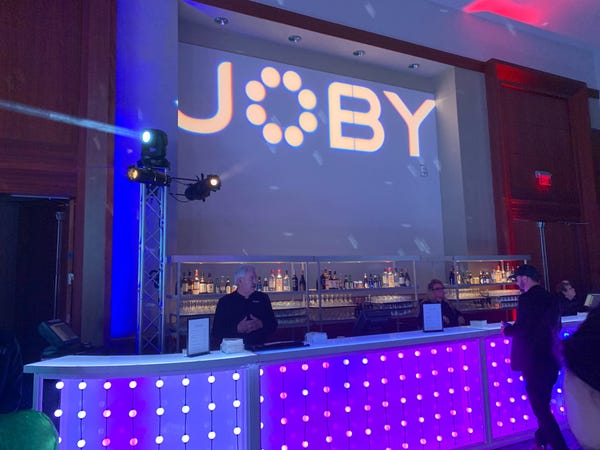 If you ran out of drink tickets, you could also pay for drinks. 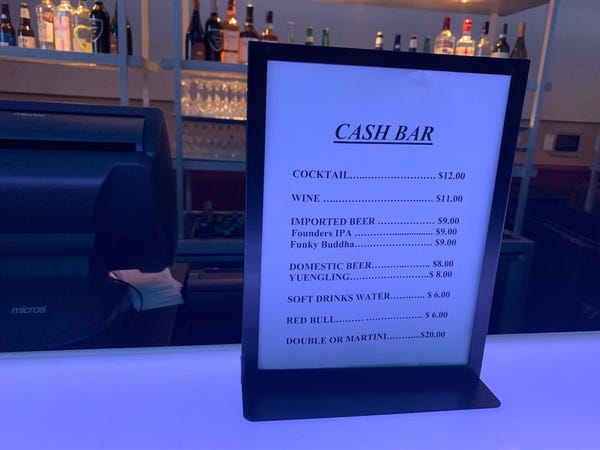 The biggest rip-off of the night was that a vodka Red Bull required two drink tickets – one for the vodka, one for the Red Bull. This system really disadvantages those who should have taken a nap.

Choosing to ration my tickets, I ordered a vodka pineapple, and relinquished one ticket. 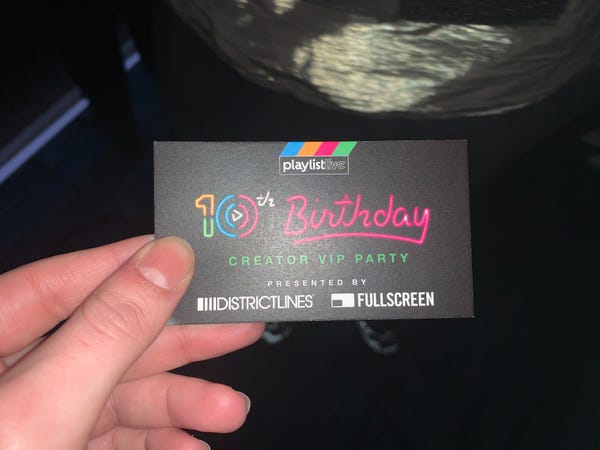 Later, I too would be granted access to unlimited tickets, thanks to the group I was shadowing. But at this point, I knew I had too many hours ahead of me to waste both tickets in one go.

The drinks seemed like pretty standard pours, which was probably a good call. 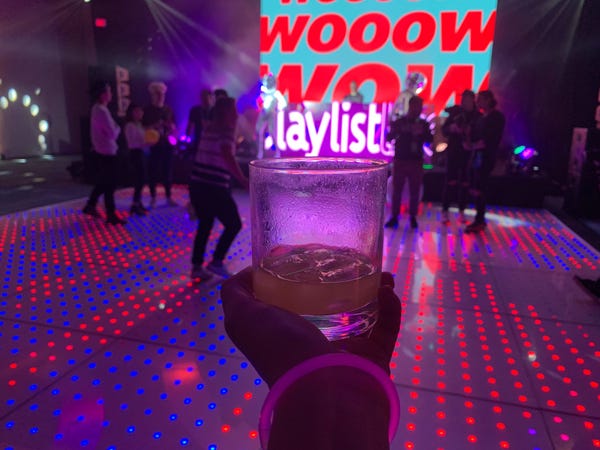 The party security patrolled the dance floor several times during both evenings to scout out underage drinkers – a huge problem at conventions where the attendees skew young, but still want to have a wild weekend. My vodka pineapple didn't seem diluted, but it wasn't a very heavy pour, either.

Most people at the after-parties clustered around little tables and on a few awkwardly placed couches and chatted. 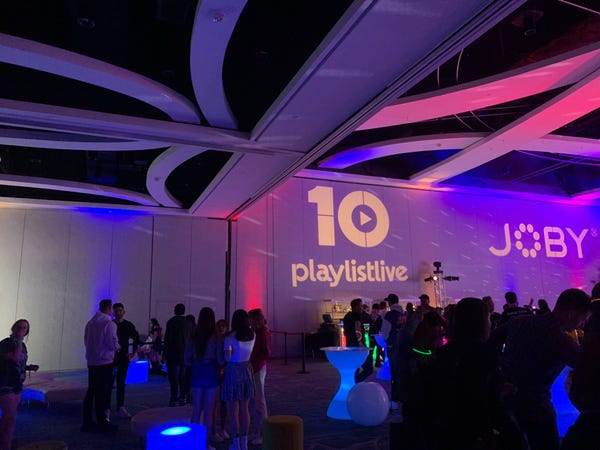 During the Friday night party, I scurried around the ballroom talking to people and taking pictures for most of the evening. The Saturday night party was more crowded and a little more energetic, so more people were dancing than talking.

I didn't feel the need to embarrass myself in that way, so I spent most of Saturday night sitting on a lone pair of couches that was awkwardly placed in the middle of the ballroom. Of course, I was never lonely, because I was sitting with a group of some of the most famous YouTubers at the convention, and people kept coming up for photos and to say hello.

Besides drinking and dancing, there were activities set up for party guests. 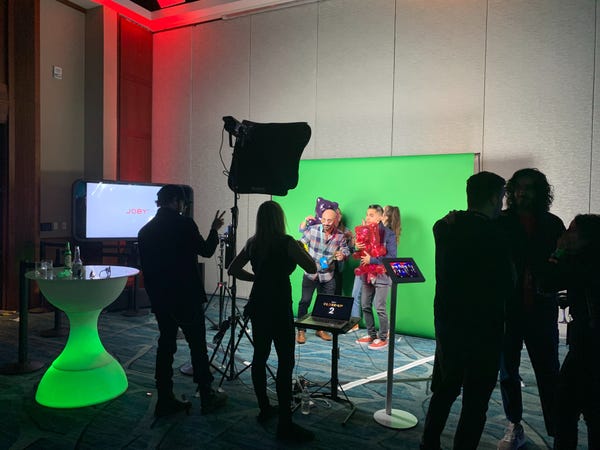 The first night, there was an interactive photo booth that took video and compiled a GIF of whatever you and your friends chose to do during the 30 seconds or so you had in front of the camera. I posed for a few of these but that evidence won't be disseminated on the internet if I have anything to say about it.

The second night, there was a cool custom photo booth. 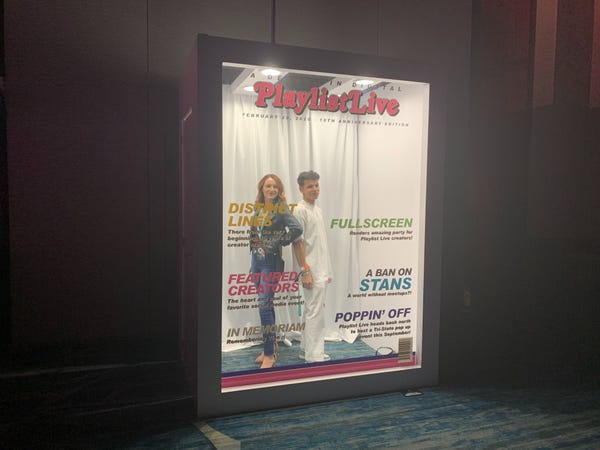 To commemorate ten years of Playlist Live, this booth was decorated to look like a Rolling Stone magazine cover, complete with headlines like "A Ban on Stans" and "Poppin' Off."

At one point on Saturday, some impromptu performers took the stage. 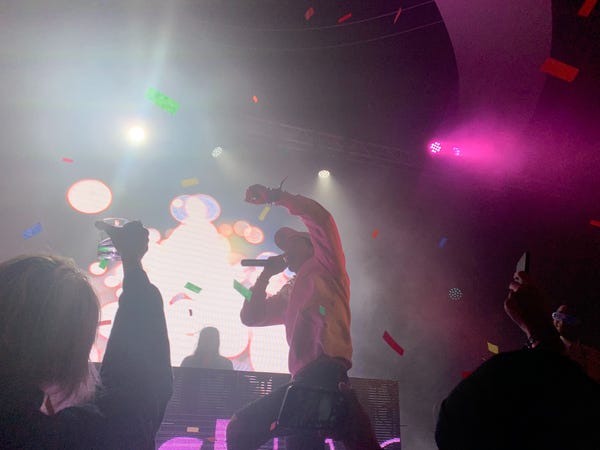 By the end of the night, the floor was littered with confetti. 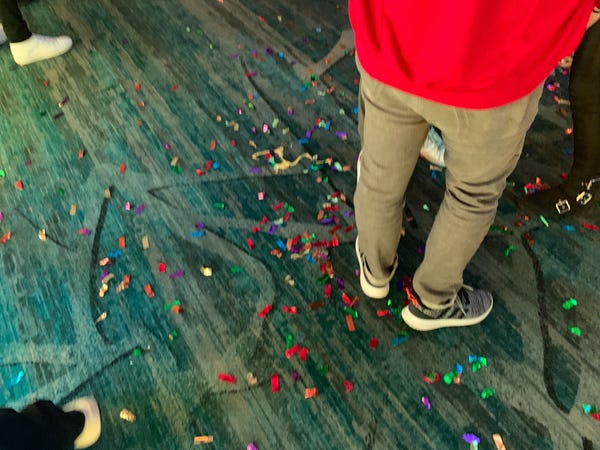 People didn't really feel the need to stay late at the Playlist parties. The room started emptying out by 1:30 a.m., and the leftover confetti that exploded from the ceiling at various points in the evening was scattered everywhere.

On Saturday, though, there was free pizza to be enjoyed. 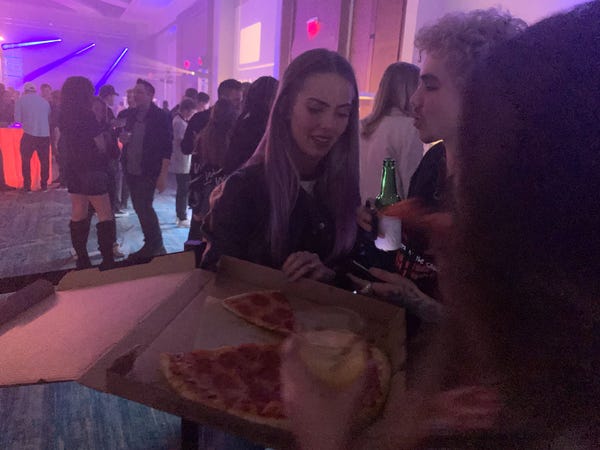 On Saturday, people carried pizza boxes around and fed it to various influencers. I didn't eat any of the pizza because it looked kind of cold and unappealing, and also – I don't know if you've heard, but there's this thing called coronavirus going around.

Finally, the party attendees took the golf carts back to the Marriott rooms each night, and a few lucky fans got late-night selfies. 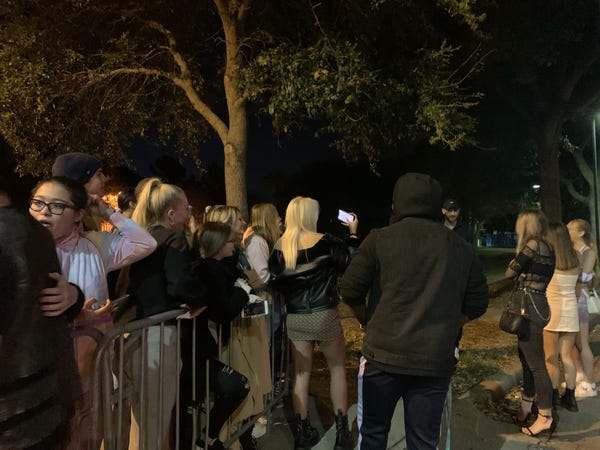 Despite the convention's best efforts to keep the parties fan-free, some dedicated fans figured out where the golf carts pulled up each night to let creators back into their hotel rooms, anyways. But Mongeau and Daniel were more than happy to stop, chat, and take pictures.

Overall, the parties were well-orchestrated, but the unique circumstances of Playlist Live nightlife made them a surreal, youth-targeted experience. Since everything was free, I'd definitely do it again – but if you're a fan wondering what a real night out is like for your favorite influencers, it's probably not worth sneaking into this one.