Inside the meteoric rise of Jojo Siwa, the 16-year-old 'Dance Moms' star who entranced millions of children with her positive, colorful, candy-filled brand

Since her days of impressing the formidable Abby Lee Miller, the 16-year-old has emerged as a household name, built a multimillion-dollar business, cultivated a massive online following, become an idol to the under-10 demographic, and embarked on a 3-continent concert tour.

Here's how the 16-year-old built an empire:

Long before moving into her 6,111 square-foot mansion in Los Angeles, Siwa lived with her parents and older brother in the midwest.

Joelle Joanie Siwa was born on May 19, 2003 to dance instructor Jessalyn Siwa and chiropractor Jon Siwa. She grew up in Omaha, Nebraska with her older brother Jayden.

"When my husband would come pick her up at the [dance] studio, she would not want to leave at night," Jessalyn told Rolling Stone in a 2019 interview. "She was two years old; couldn't even dance or do anything."

As evidenced by her frequent throwback photos on Instagram, Siwa's signature obsession with hair bows also developed in infancy. 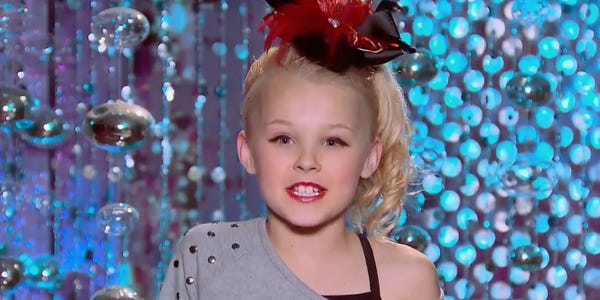 At 9 years old, Siwa was the youngest competitor on the reality show in which dancers (and their mothers) competed for $100,000 and a scholarship to the Joffrey Ballet School.

Siwa placed 5th in the competition, making a lasting impression with her feisty attitude and camera-friendly energy.

"During shooting, the crew would gather in the control room to watch JoJo's interviews live because they were so compelling," Executive producer Bryan Stinson told Rolling Stone. "Producers nicknamed them 'The JoJo Show'."

Siwa's mother also made waves on the show, thanks to her stage parent antics.

"I would say it's my mission in life to make JoJo a star," Jessalyn said of her motivations to enter the competition.

Siwa and her mother went on to join the cast of "Dance Moms" for two seasons. 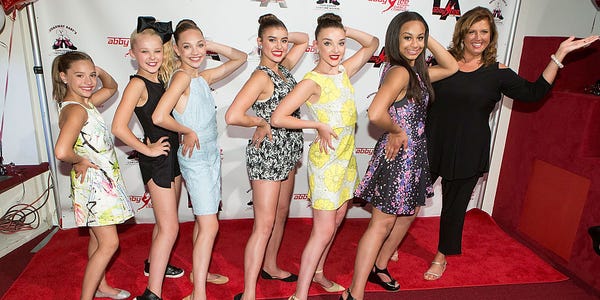 During the audition process, they made their debut on "Dance Moms," the wildly popular reality show following the young dancers in the company as they navigated the world of competitive dance and ambitious stage parents.

Siwa was selected to join the team in 2015 and appeared with Jessalyn on two seasons of "Dance Moms."

During the show, Jessalyn frequently clashed with Miller and the other mothers over her parenting style and competitive nature.

"I think you have some deeper issues," Miller said during the "Dance Moms" Season 5 reunion episode. "You are doing detrimental harm to [Jojo]."

While appearing on "Dance Moms," Siwa made her YouTube debut. 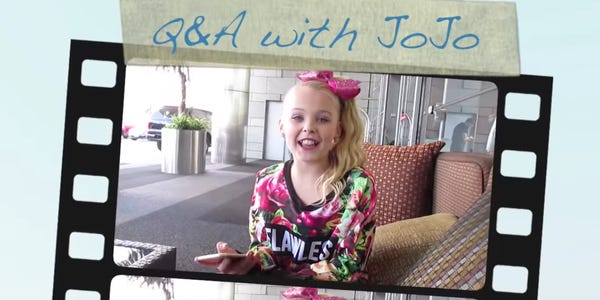 Siwa began posting videos to her YouTube channel in 2015, beginning with occasional Q&As for avid "Dance Moms" fans and working up to internet challenges and more expertly-edited vlogs.

Within three years, Siwa was one of the most-followed people on the platform.

Her main channel, which features celebrity collabs, tours of her residences, and kitchen experiments, among other projects, currently boasts 10.7 million subscribers and her videos have received a total of 2 billion views.

"I never forget where I came from with YouTube," Siwa told Rolling Stone. "I wouldn't be where I am today without it."

As Siwa's name recognition and popularity skyrocketed, she released her first single.

In May of 2016, just days after her 13th birthday, Siwa released her debut single "Boomerang."

Her foray into music was wildly successful; the song and accompanying music video, which addressed issues of cyberbullying, was an instant success, reaching 9 million views in just one month.

In August of 2017, the song was certified platinum by the Recording Industry Association of America.

To date, the official "Boomerang" music video has been viewed over 827 million times on YouTube.

Siwa's signature style proved popular with her fan base, so she launched a line of hair bows, appropriately called Jojo's Bows. 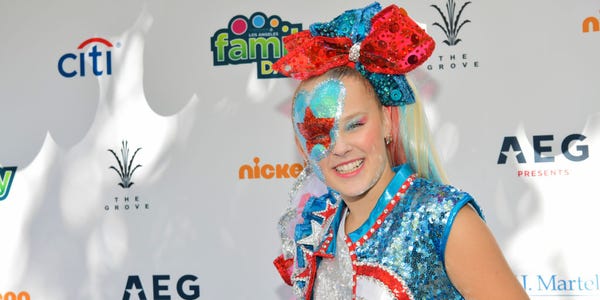 Siwa — who famously wore large colorful hair bows during her reality TV appearances —released a line of bows with Claire's in 2016 that matched the handmade hair accessories she wore during dance competitions.

While Jojo's Bows proved to be incredibly popular with the elementary school demographic, Siwa received backlash for the high retail prices.

Some school administrators in the UK even banned the bows from schools, as students who couldn't afford the £8 to £12 accessories were being bullied by their peers.

Siwa has defended her merchandise, stating in a 2017 interview that Jojo's Bows are a symbol of "power, confidence, believing-ness."

Since launching the bow line, the 16-year-old has sold over 40 million units and gone on to partner with J.C. Penney in releasing a bedroom decor line, children's books, and even a Jojo Siwa doll.

In 2017, Nickelodeon signed Siwa to an "overall talent deal." 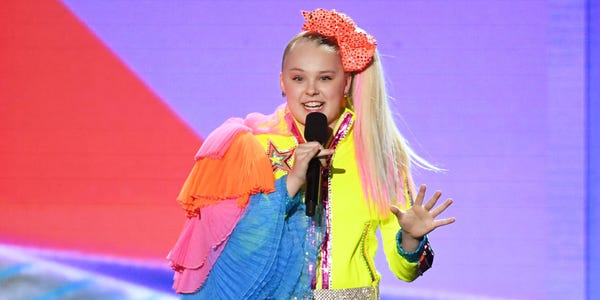 "Nickelodeon will have the opportunity to work with Siwa on a multi-platform basis including in consumer products, original programming, social media, live events and music," a representative for the network said in a press release at the time, adding that Nickelodeon had "already commenced development of an exclusive line of consumer products" inspired by Siwa.

Since joining the network, Siwa has guest-starred in TV series and movies and been featured in several Nickelodeon specials.

In 2018, Siwa announced her first-ever headlining tour — and tickets sold out almost immediately. 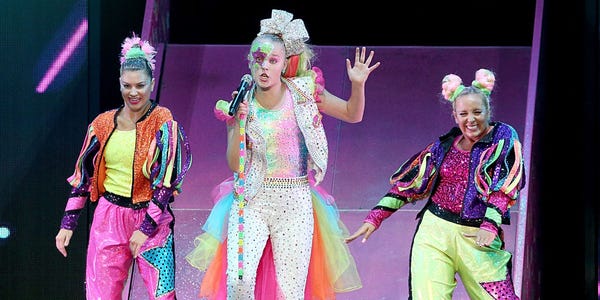 While Siwa is known for getting along with fellow celebrities, she did feud with Justin Bieber over an Instagram comment.

The drama between Siwa and Bieber began in December of 2019 when Siwa posted an Instagram photo of the BMW she received for Christmas — a sports car complete with glitter paint, shooting stars, and Siwa's face on the hood.

"BEST CHRISTMAS EVER!!" she captioned the post, which has since received over 615,000 likes.

West Coast Customs, the company behind the creative paint job, also posted a photo of their handiwork on the convertible — and Bieber didn't hold back his thoughts on the style.

"Burn it," he commented three separate times on the post.

Siwa's mother wasted no time in getting involved, commenting "Burn your own things," in response to Bieber's comment.

After receiving a deluge of backlash for his comments, Bieber took to Twitter to apologize.

@itsjojosiwa I have nothing against you it was the car and the colors I didn't like," he wrote in a tweet that has since received 83,000 likes. "I really hope you didn't think it was malicious or mean spirited."

Siwa accepted the apology and even attempted to recruit Bieber to perform at her birthday party.

"It's all good bro!" she tweeted. "You can perform at my 16th birthday party and we'll call it good!"

She's beloved by the Kardashian clan. 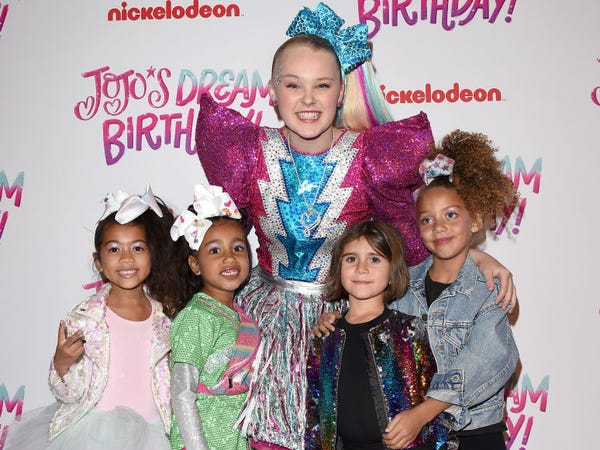 Among Siwa's many young fans is Kim Kardashian and Kanye West's firstborn, the iconic North West.

In February of 2019, Kardashian first posted about North's obsession with Siwa's classic bows.

"LOL at North's Bow," she wrote in a tweet that has since received 11,000 likes. "She is obsessed with @itsjojosiwa."

Siwa saw the tweet and reached out to Kardashian about setting up a meeting — while her Twitter followers and YouTube subscribers waited anxiously for a collaboration.

Siwa delivered with a YouTube video titled "BABYSITTING NORTH WEST!!!" in which she and the mini West spent a day making glittery slime, playing hide and seek, and showing off their dance moves.

The highly-anticipated collab has received over 31 million views on YouTube and behind-the-scenes footage of the day later aired on an episode of "Keeping up with the Kardashians."

Several months after the collab, North West and her famous cousin Penelope Disick made an appearance at Siwa's 16th birthday party which was filmed as part of a Nickelodeon special "JoJo's Dream Birthday."

Siwa faced intense criticism for the eventual recall of her Claire's makeup kits. 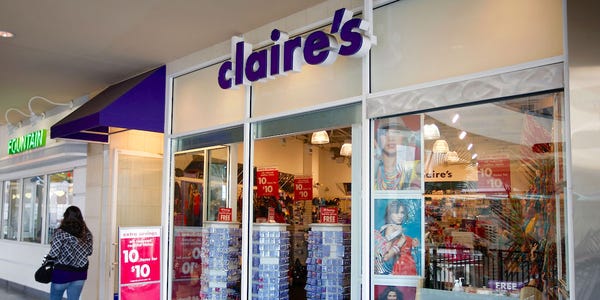 In June 2019, Siwa ran into trouble with one of her many product lines when the FDA issued a warning about dangerous levels of asbestos in a JoJo Siwa-branded cosmetics kit. Claire's recalled the product in response and Siwa posted a now-deleted YouTube video to address the issue.

"Recently, it's been brought to my attention that there's been a problem with one of my products in Claire's stores," she said in the one-minute video. "I just want to let everyone know that no matter what, safety is myself and Nickelodeon's number one priority in everything, in every product, and everything out there."

She added that those who purchased the product would be issued a refund. 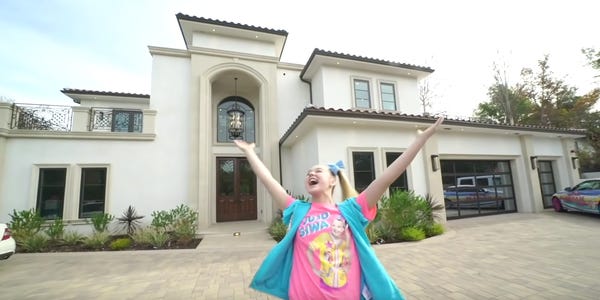 In December of 2019, Siwa and her family moved into a $3.4 million home in Tarzana, a suburb of Los Angeles.

The walkthrough featured a grand piano surrounded by display cases holding Siwa's bedazzled tour outfits; a 'fun room' with a built-in candy bar stocked with Nerds, Airheads, Haribo, Skittles, and Peanut M&Ms, among other treats; a 'merch room' packed with plush unicorns and oversized hair bows; a custom-made pool table; full-sized candy dispensers and gumball machines; and, of course, Siwa's bedroom which is decked out with a photo wall and a rainbow headboard for her bed.

Currently, Siwa is dominating headlines over her social media posts that are sparking fan speculation about her dating life.

While Siwa has frequently said she doesn't "have time" for relationships and has little interest in dating, fans are speculating that she recently entered into a relationship with a particular "friend" who's made appearances on her TikTok and Instagram.

On March 1, Siwa posted a TikTok video with Elliot Brown in which the two practiced a 'secret' handshake.

Siwa reposted the video to her Instagram, where it was viewed over a million times. Brown went on to post a photo of the two to his account, further fueling dating speculation.

Siwa's original fans, who still remember the 16-year-old as a 9-year-old standing up to Abby Lee Miller, had no shortage of reactions to the public displays of social media affection.

Siwa has yet to make any public statement about her relationship status, so her army of "Siwanators" will have keep speculating for now.