Last Sunday night up-and-coming jazz talent Kade Brown popped round the corner from his home to Brunswick’s Jazzlab, as he often does. It turned out to be a double bill of another two guys who lived a few streets away, Max Teakle and James Bowers.

After the show, the three shared a few beers. They have another couple of things in common: apart from being superbly talented young pianists, they’re the three Victorian finalists in this year’s National Jazz Awards. 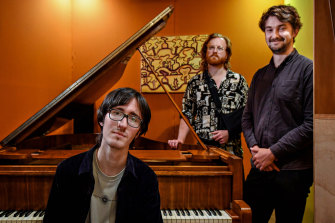 “Pretty much half of the whole Melbourne jazz community is within walking distance,” says Brown, 26. “And really, this is a great thing to have. You can play four nights a week and you can see everybody play every other night.

“It’s a nice feeling of making music together.”

Is Brunswick the country’s jazziest postcode? It certainly feels like it.

Teakle, 20, comes from four generations of jazz musicians and is currently studying at the Victorian College of Arts (in another coincidence, fellow finalist Bowers was his piano teacher when he was 12). His family moved to the area when he was seven, and he grew up immersed in music.

“When I was 15 and 16 I was able to walk around the corner and go to a jazz gig, at quite a high level,” he says. “I had friends studying music but who didn’t live anywhere near – if they wanted to go their parents would have to drive them, it would be too late, they couldn’t get home.

“But for me, I’d go to The Brunswick Green and watch people like [trumpeter] Scott Tinkler and [guitarist] Steve Magnusson, like, every Tuesday when I was 14, 15. If I lived somewhere else there would be no access to that so I might not have any interest.”

And there’s a snowball factor – he knows plenty of musicians (including Bowers) who moved to the area because of access to performance.

“Everyone knows each other. Maybe it’s a bit cliquey but it’s quite easy to see someone, be interested in what they do, and then meet them and talk to them.”

Brown adds that jazz especially, as a musical form, benefits from immersion, from throwing yourself into a community.

“The music itself is so conversational, and spur of the moment and instantaneous,” he says. And the variety of other styles and genres of music around the area means you’re never starved for inspiration.

Of course, there hasn’t been much music, or community, in the last 18 months.

“Something I think everybody really missed a lot was having that rapport,” says Brown. “Two or three times a week we’ll just have a great gig, and boost each other up, and take that away.”

Organised by the Wangaratta Festival of Jazz & Blues, the National Jazz Awards are open to musicians aged 36 and under, and focus on a different instrument each year: this year it’s the piano. Usually the finalists play the closing weekend of the Wangaratta Festival but this year they’re playing free online concerts at wangarattajazz.com, with the winner announced on Sunday.

The 10 finalists include four from NSW, two from SA, and one from WA. They submitted audio recordings of three pieces to be blind-judged – the winner gets $7000 and a recording session at Pughouse Studios in… Thornbury.