‘It is possible to go in there and forget yourself’: Bringing back the art of deep listening

Knowledge of the seasons was integral to the ancestors of people living in the Kulin nation. Their awareness of and relationship with the natural world and their management of the land was superlative: it had to be for them to survive for 60,000-odd years.

In the Kulin knowledge system, in Melbourne and surrounds, there are seven annual seasons, alongside two non-annual seasons, fire and flood. "Every seven years they went through and burnt stuff, they were supreme managers of country and that has been forgotten," says Daniel Browning, curator of the SEASONS in Blak Box project opening this week at the Royal Botanic Gardens. 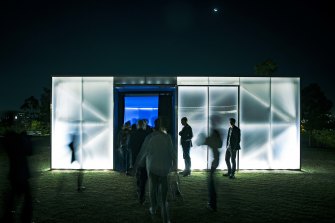 The venue for ‘Seasons in Blak Box’, a deep-listening project at the Botanic Gardens in Melbourne.

The Blak Box is an architect-designed 'listening space', devised by Urban Theatre Projects as an innovative way to tell Indigenous stories. The name riffs on the idea of the white cube gallery and the black box that is theatre. Importantly, it has no floor, so visitors stand on country.

Broadcaster and sound artist, Browning was enlisted to curate the project, his fourth for Blak Box. He interviewed six people, including Boon Wurrung and Wurundjeri elders, community members and language specialists, about their memories and insights, and how they feel spiritually about their country. The idea is to recreate the seasons through sound. “The ancestors read plants like texts. The ebbing and flowing of wild game, the running of fish and the life cycles of plants tell a story every bit as instructive as a book,” he says.

The 50-minute immersive features sounds recorded in the natural world, excerpts from the interviews, and music composed by James Henry. It is something of an oral history, appropriately for people whose stories have been passed down that way from generation to generation.

Browning sees the box as something of a time machine and says it provides a transportative experience. "It is possible to go in there and forget yourself. Not to escape necessarily but to inhabit another space," he says. "Think of it as a meditation and a reverie, a little bit of a dream." 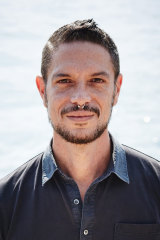 He discovered that seasonal knowledge was key to life. "You couldn’t live on country without reference to what was happening in the waterways, deep in the bush and even in the sky.”

"The experiences of all the different clans and all that biodiversity and all that plant and animal life. How their lives were predicated on the movement of the seasons. Their bodies moved with the seasons, so in essence it’s about that rhythm of life."

The concept of deep-listening might seem foreign in our over-stimulated, noisy modern world. Tellingly, many Indigenous languages have words for different types of listening, as well as an instinctive approach to the same. It's how Aboriginal children are taught to listen to their elders, known as dadirri – a spiritual approach based on respect. "In Ngukurr in the Northern Territory, in Wiradjuri, there’s a word for deep listening, in Yorta Yorta, there’s a word for this very fixed, attentive way of approach, of how you approach your interpersonal relationships."

Sound and the absence of a visual image allow imagination to take flight. The richness of the human voice is exemplified through the project, the timbre and nuance and character of the individual helping bring their stories to life.

The lighting takes its cues from the environment, says Browning. "Colours that correspond with the seasons, so for autumn you might have a burnt orange or deep high summer. When we’re talking about the silver wattle, the lights need to be a kind of silver."

The Blak Box's program of sound is different every time it goes to a new place. There have been two iterations in Sydney at last year's Sydney Festival at Barangaroo, and one in Blacktown, about the dialogue between generations of Indigenous people.

"The dream would be to take it to all parts of the country and see it in really diverse landscapes and try to tell the story of that country with the artists from that country," says Browning. "There’s so much poetry in our languages and for me these projects are always about hearing our languages spoken and absorbing that poetry and metaphor and meaning. Our languages embody so much of us."

“For me there is nothing more respectful than when you listen intently to someone. Listen without the expectation of speaking.”

SEASONS in Blak Box is at the Royal Botanic Gardens from March 6–April 5.