Out of office! Ivanka laps up Miami life as she chills with a book and enjoys breakfast with son Joseph on the balcony of family’s luxury apartment

Ivanka Trump appears to be relishing life away from the White House, having spent her Monday morning soaking up some sun while lounging on the balcony of her lavish new Miami apartment – a far cry from the hectic, and wintry, D.C. life she was leading just a few weeks ago.

The 39-year-old was pictured kicking off her week with some fresh air outside of her family’s new Florida home, lying back on a cushioned sun lounger while she scrolled through her phone and took a quick call.

As well as taking some time to herself in the early morning, Ivanka also took the chance to bond with her son Joseph, seven, over breakfast before he headed off to school. 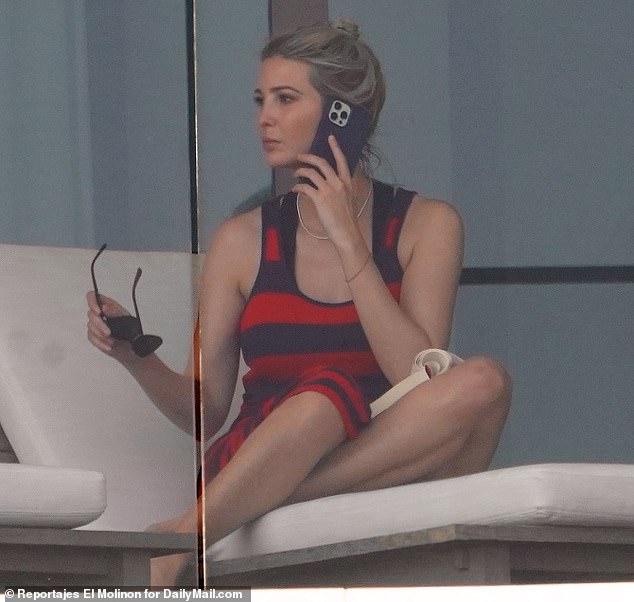 Living the high life! Ivanka Trump was seen enjoying a relaxing Monday morning on the balcony outside her new Miami home 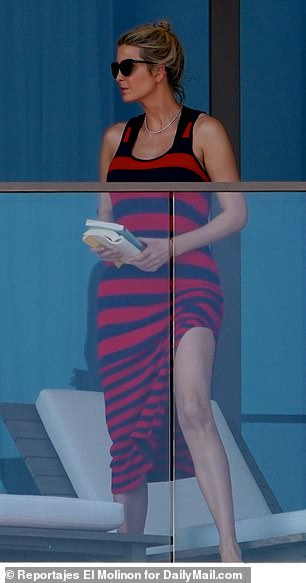 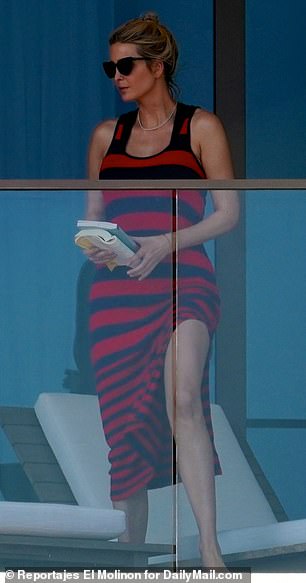 Cool and casual: In place of the tailored suits and smart dresses she wore in D.C., the 39-year-old opted for a red-and-blue striped sun dress and a pair of glamorous sunglasses 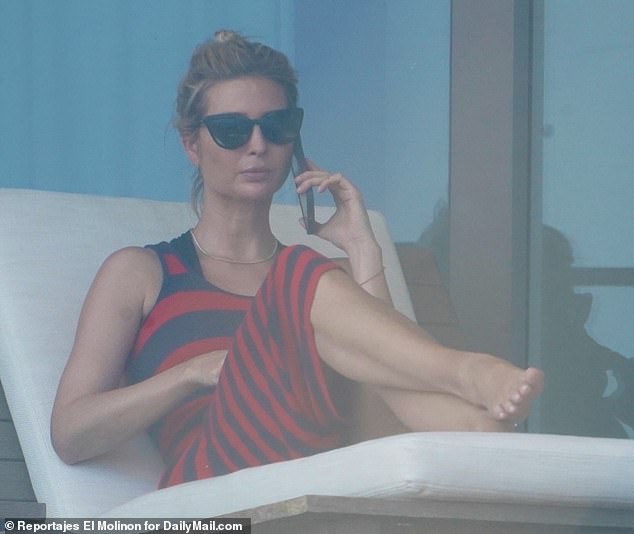 Quick chat: Ivanka had two books in her lap, however she took a break from reading in order to take a call on her phone 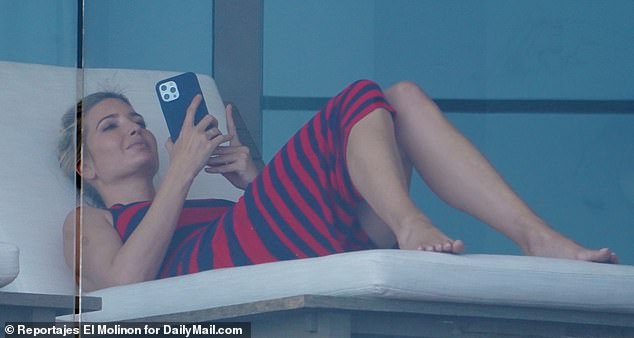 Something funny? The former First Daughter smiled at something on her phone as she scrolled through it while lying back on the cushioned chair 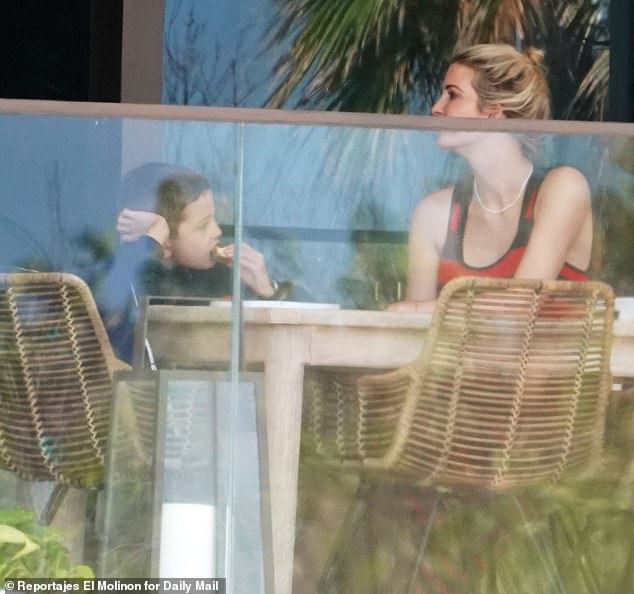 Mother-son bonding: Ivanka was also seen eating breakfast with her son Joseph, who was dressed in his school uniform, ready to head to class

The mother and son were seen sitting at a dining table outside on the balcony where the youngster enjoyed his morning meal while seated alongside his mom.

Joseph was seen dressed in the same school uniform that he wore last week when he and his older sister Arabella, nine, and younger brother Theo, four, were pictured picking up ice cream with their mother after a day of classes at their new Hebrew school.

At one point the doting youngster was seen holding his mother’s hand in a touching display of affection before heading off to school for the day.

Ivanka appears to have quickly adapted to life in the Sunshine State, swapping the tailored suits and dresses she wore in D.C. in favor of a casual red-and-blue striped sun dress and a pair of dark sunglasses.

The dress featured a thigh-high slit on one side, and it looked as though the former First Daughter was wearing a bathing suit underneath it – perhaps in anticipation of a trip to the beach later on in the day.

Luckily for Ivanka and her family, they don’t have far to travel in order to reach the ocean, which lies just a stone’s throw from their condo, which is located in exclusive oceanfront building Arte Surfside.

The couple signed a one-year lease on their condominium in the property, which is one of Miami’s most coveted oceanfront buildings, the Wall Street Journal reported last month.

It is unclear how much Ivanka and Jared are paying for the condo, but it’s safe to say the luxury property didn’t come cheap.

Arte is one of the most expensive complexes in the Surfside neighborhood, with an average rental price of nearly $47,000 per month. Its penthouse sold for $33million to an unnamed private equity executive from New York last month.

The Kushner family are said to be using the large, unfurnished unit as a temporary home while they build a more permanent one on a two-acre plot they purchased on Indian Creek Island – also known as the ‘Billionaire Bunker’ – for $31.8 million late last year. 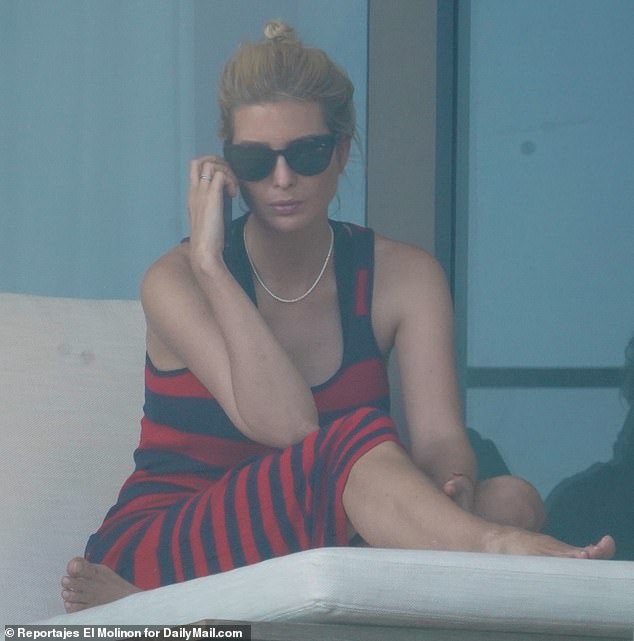 Casual: The mother-of-three had her blonde hair pulled into a top knot, and she appeared to be fresh-faced and makeup-free 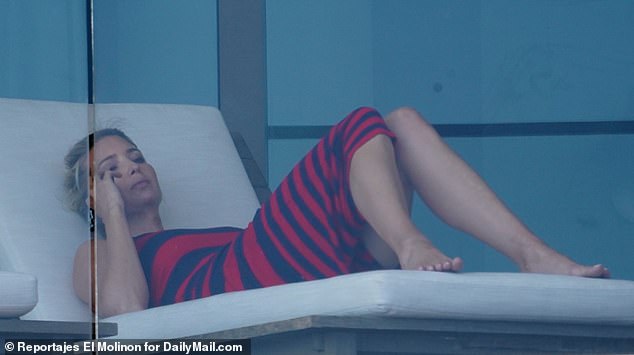 Reading: Ivanka carried two books with her on the balcony, however her phone call appears to have distracted her from any plans to get stuck into them 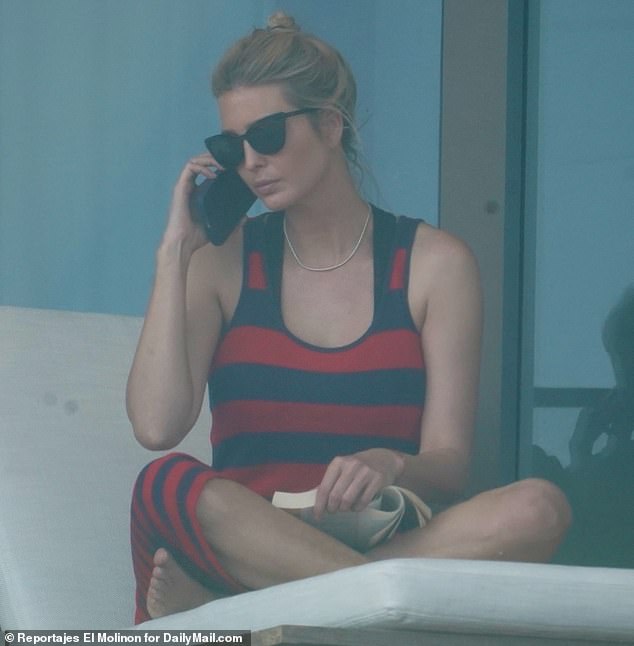 Catch up: She had one of the books perched in her lap as she took the call 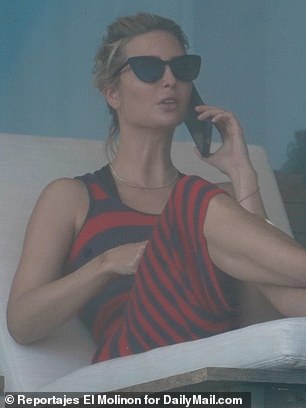 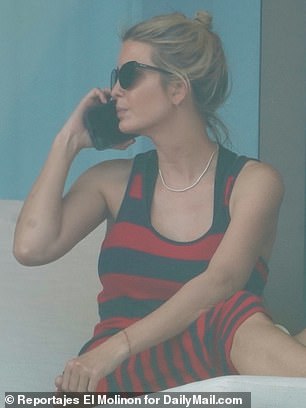 Making plans? It is unclear what exactly lies in store next for Ivanka – although it has been reported that she is considering a run for senate in Florida in 2022

While life has no doubt been something of roller coaster for the family over the past few weeks in the wake of Donald Trump’s election loss and departure from the White House, it seems as though Ivanka, Jared, and their three children, having quickly settled into Miami life.

The couple were seen for the first time in Florida last week in images obtained exclusively by DailyMail.com, which showed the family scoping out their new surroundings with a trip to the beach, and a visit to a local ice cream store not far from Arabella and Joseph’s new school.

One set of photos taken last week captured Ivanka and Jared playing on the beach with their sons Theodore, four and Joseph, seven.

While the boys reveled in the sand, Ivanka and Jared lounged on beach chairs, shielding themselves from the sun with hats and long sleeves.

Jared appeared engrossed in his cellphone while Ivanka flipped through a book, The Magic Strings of Frankie Presto by Mitch Albom.

Ivanka paired her sheer, striped sundress with woven visor and broad smile as she walked along the shore and Jared took a phone call.

Another set of photos showed Ivanka and Jared taking their kids out for ice cream. 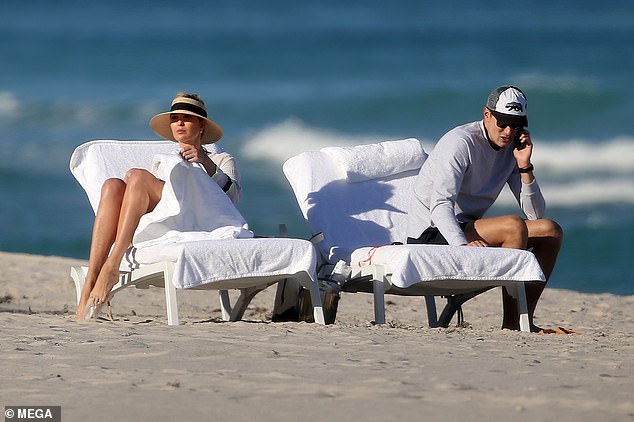 Family fun: On Sunday, DailyMail.com published exclusive images of Ivanka and her family enjoying their first week in Florida 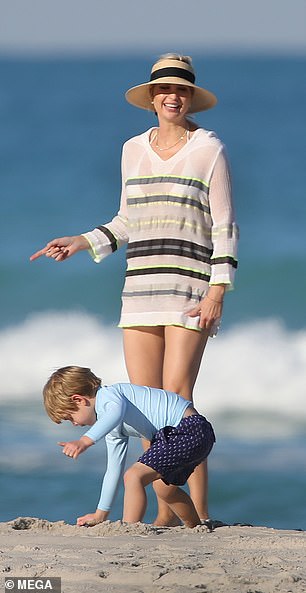 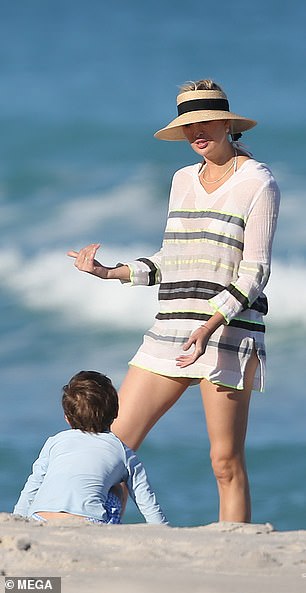 Fun in the sun! Ivanka beamed as she watched her four-year-old son Theodore play in the sand near the Kushner’s new home in Miami 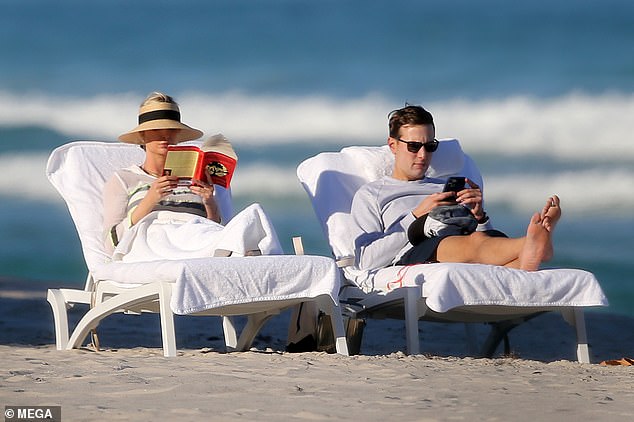 Taking it easy: Jared appeared engrossed in his cellphone while Ivanka flipped through a book, The Magic Strings of Frankie Presto by Mitch Albom 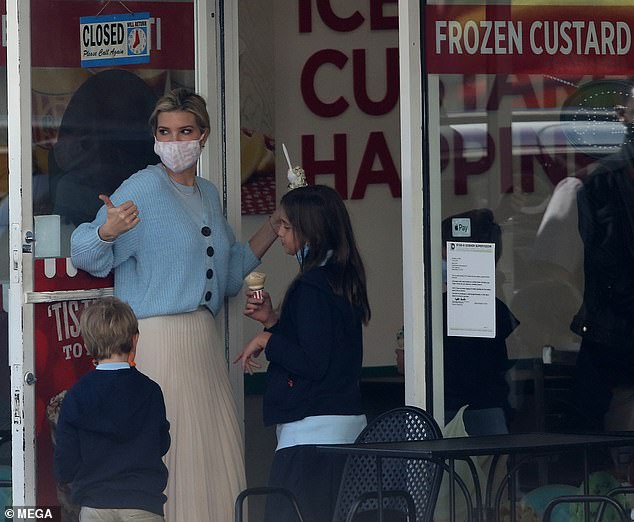 Sweet treat: On Wednesday, she took her kids Arabella, nine, Joseph, seven, and Theodore, four, out of an ice cream after school 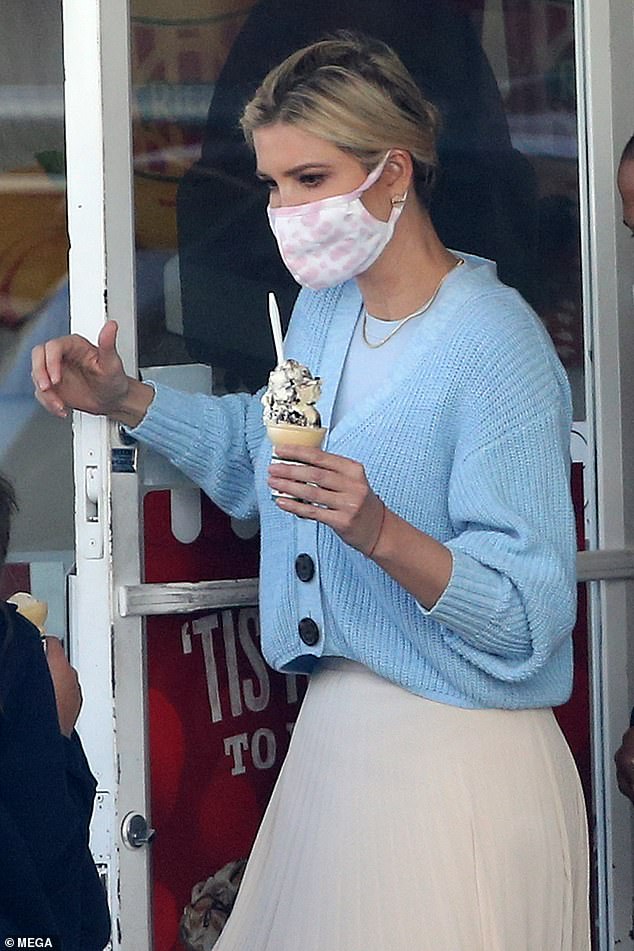 Yummy: The children are attending a Hebrew school in the Miami area and were all seen wearing their new uniforms, while their mother wore a cream skirt and blue cardigan 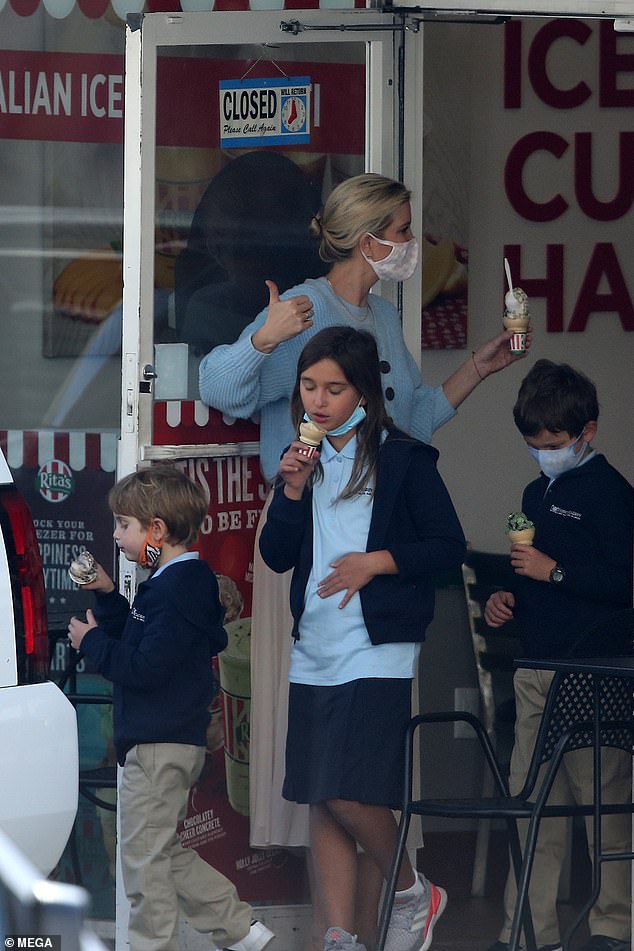 Matchy matchy: Each of the children, Theodore, Arabella and Joseph, appeared to be dressed in school uniforms with baby blue polo shirts

Each of the children, Theodore, Joseph and nine-year-old Arabella, appeared to be dressed in school uniforms with baby blue polo shirts and navy hoodies.

Ivanka matched her children in a baby blue sweater, cream-colored skirt and pink tie-dye mask that she pulled down to devour an ice cream cone.

While a lot has changed for the Kushners, some things – like Ivanka’s commitment to a healthy lifestyle – have stayed the same.

The former first daughter was photographed out for a run with her dog Winter on Wednesday morning, with a security detail trailing behind her.

She kept a low profile with an all-black ensemble and baseball cap, with a white mask around her wrist.

The family broke cover from their condo again on Sunday, stepping out of side door and into a white SUV.

Ivanka donned a blue calf-length dress with her trusty woven visor, while Jared wore a white long-sleeve tee, cargo shorts and black tennis shoes with a backpack slung over his back. 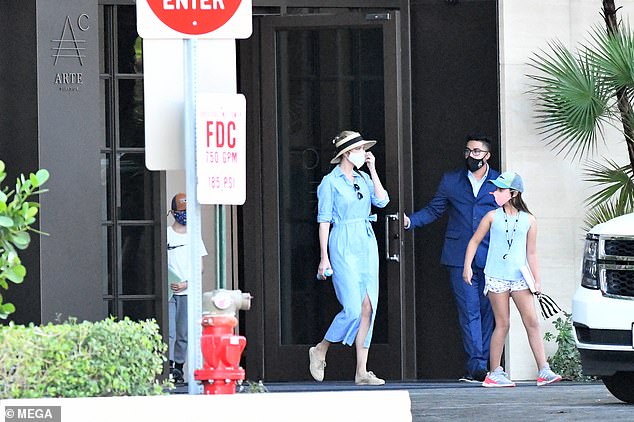 Heading out: The family broke cover from their condo again on Sunday, stepping out of side door and into a white SUV 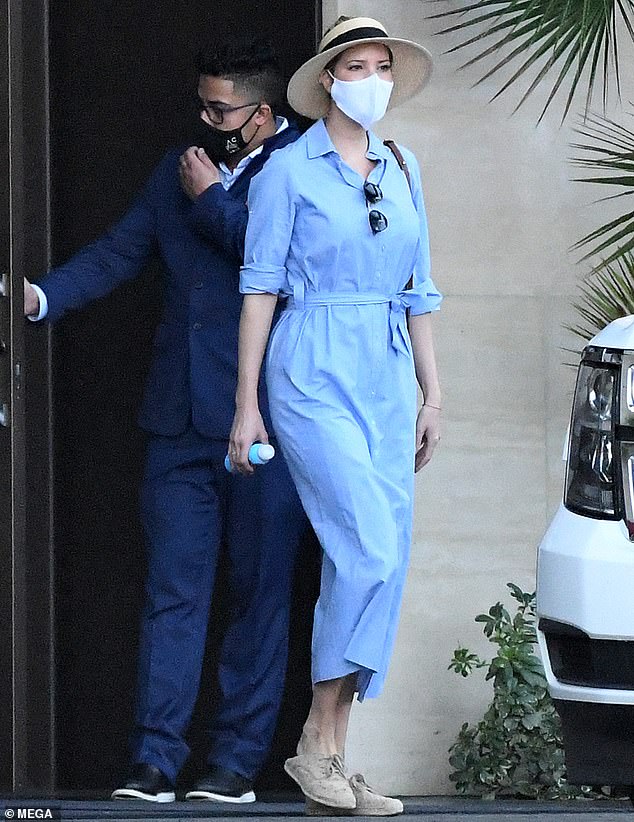 Chic and simple: Ivanka donned a blue calf-length dress with a woven visor and slip-on shoes for the outing on Sunday morning 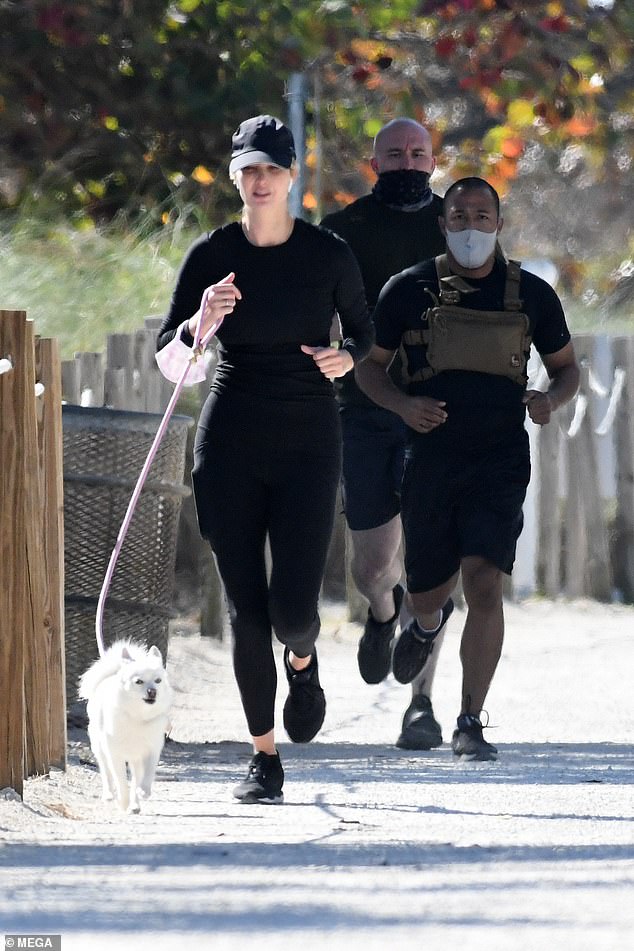 Ivanka was photographed out for a run with her dog Winter on Wednesday morning, with a security detail trailing behind her 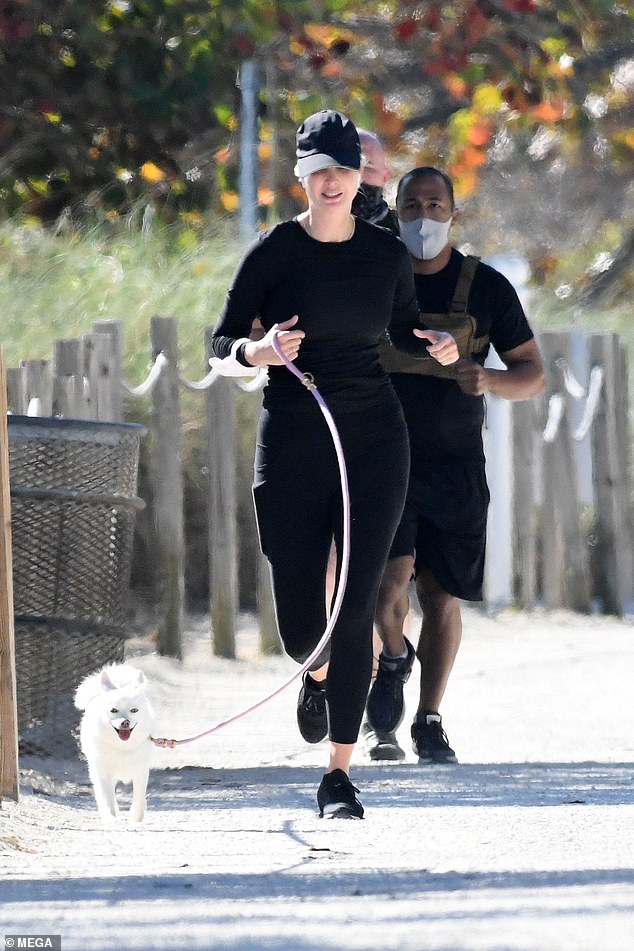 The former first daughter kept a low profile with an all-black ensemble and baseball cap, with a white mask around her wrist 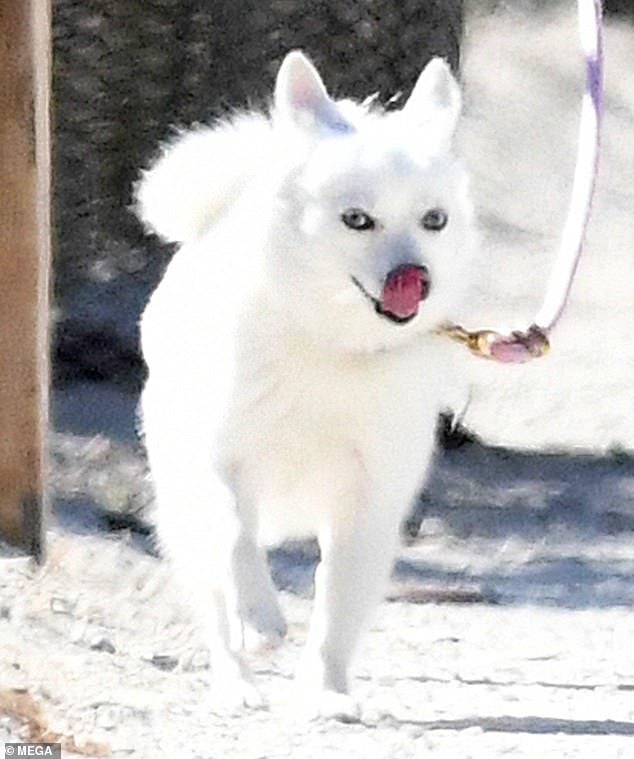 The couple reported between $23.8million to $120million in income for 2020 in their financial disclosure forms as White House advisers.

That total marks a $36million decrease on the up to $156million the couple reported for the same period a year earlier, according to Bloomberg.

Officials are only required to disclose the value of their assets and their non-governmental income in broad ranges.

But while still extremely wealthy, the disclosure suggests that Ivanka and Jared have lost ground economically as a result of their controversial roles in Trump’s administration during his tumultuous final months in office.

The couple has also been impacted financially by the ongoing coronavirus pandemic, as they both have extensive holdings in businesses – such as hotels – which have been hard hit over the last 11 months. 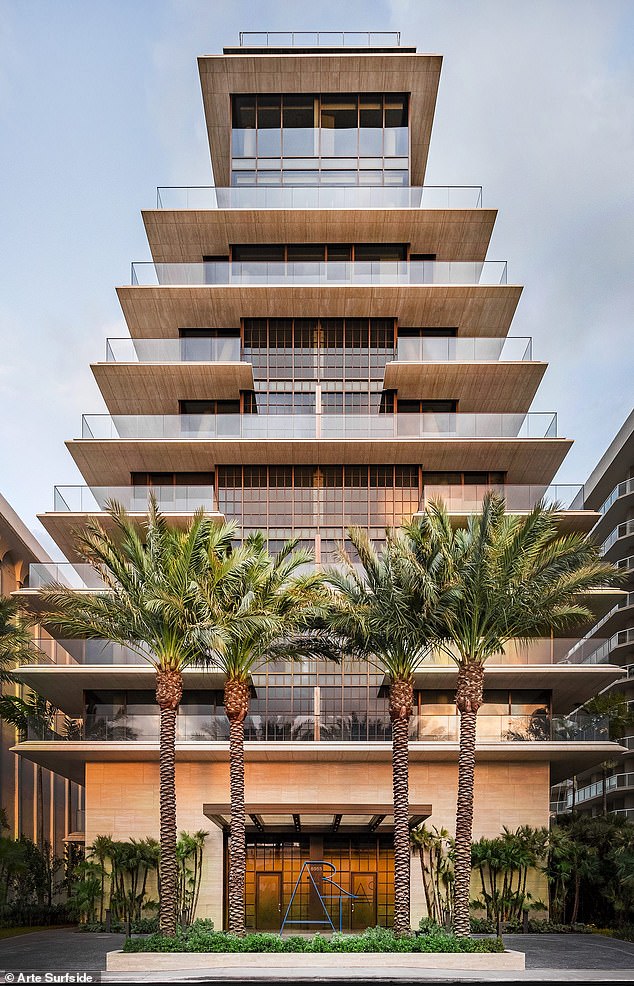 Ivanka and Jared signed a one-year lease on a condominium in one of Miami’s most coveted oceanfront buildings, Arte Surfside (pictured), the Wall Street Journal reported last month 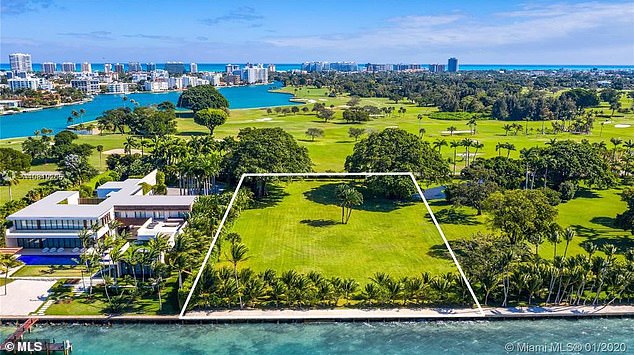 Future: The couple are expected to use the condo while they build a more permanent home on a two-acre plot they purchased on ‘Billionaire Bunker’ for $31.8million late last year 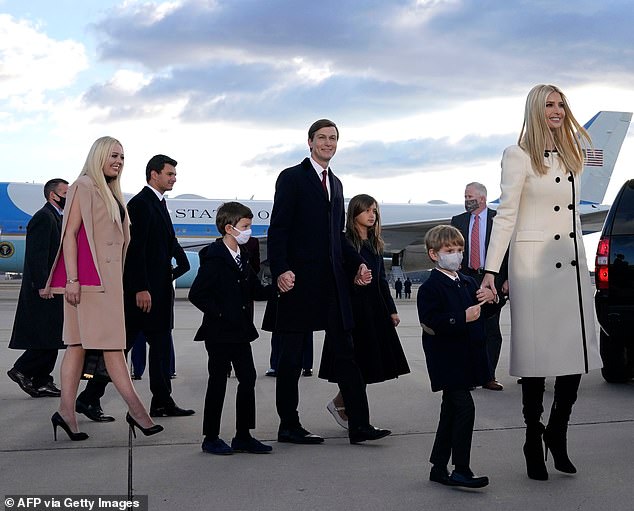 Ivanka, Jared and their children are seen leaving Washington, D.C., before Joe Biden’s inauguration on January 20 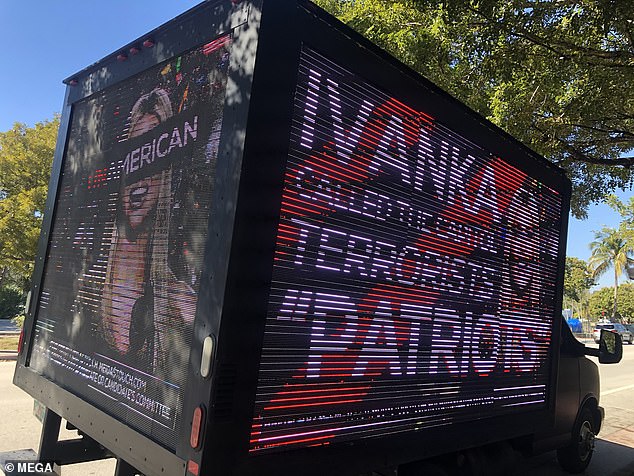 Backlash: A truck with a message for Ivanka and her supporters was seen driving around her new hometown in Miami on Wednesday 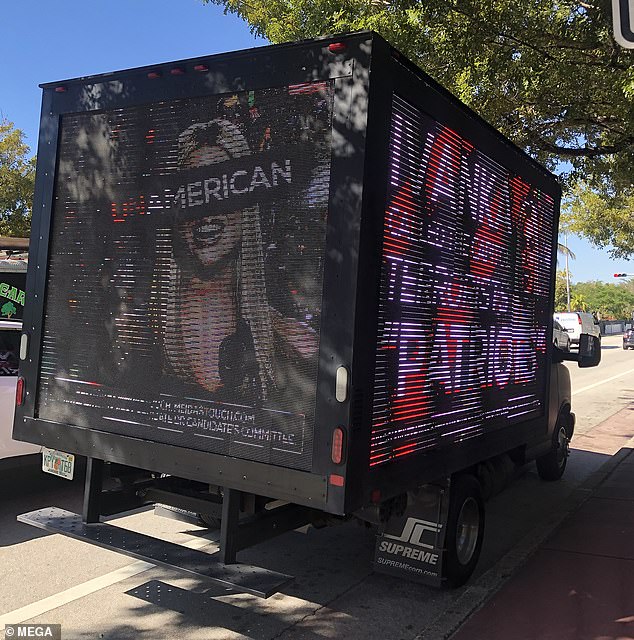 It had a photo of Ivanka’s face with the word ‘UNAMERICAN’ over her eyes as well as the message ‘Ivanka called Capitol terrorists patriots’, referencing her tweet about January 6 riots

Neither Ivanka, 39, nor Jared, 40, took a salary during their time as advisers to former President Trump.

In 2017, shortly after joining the White House staff, they reported an income of as much as $195million – $75million more than the couple disclosed this year. That initial disclosure, however, covered a longer period of time than 2020’s.

As for overall assets, the couple’s figures increased only a small amount, if at all, over the last four years – a period of time in which the stock market climbed more than 60 percent.

In their most recent disclosure, Javanka listed assets worth between $206million and $803million.

Both heirs to family real-state empires, Jared and Ivanka also have extensive holdings in businesses which have been hard hit by the ongoing coronavirus pandemic, which may account for their financial shortcomings.