On “The Hills: New Beginnings,” his wife Ashley expressed concern over him attending a casino night with the boys.

Jason Wahler gave some insight into just how bad his recent relapse really was on Wednesday night’s episode of “The Hills: New Beginnings,” while also sharing the highs and lows of his pregnancy journey with wife Ashley Stack.

With Brandon Thomas Lee hosting a casino night at his home with the rest of the guys, Wahler was seen discussing his attendance with Stack, who was “a little concerned” considering his past issues with gambling. When he said there was a $500 buy-in, she seemed shocked, but apparently still gave him her seal of approval. 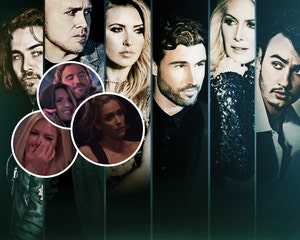 Everything You Need to Know About The Hills: New Beginnings Season 2 (Exclusive)

In a confessional, Jason explained that the two recently bought a new home — because “the last house we owned, we ended up having to sell, due to my addiction and moreover with gambling.”

“It’s way different now, there’s a lot more to lose,” he added. “I can’t put my family at that type of risk, especially in a time when she’s pregnant.”

Frankie Delgado was clearly surprised Wahler was allowed to play with them, asking Jason whether Ashley was “okay” with him being there and throwing “putting a little money on the table with the boys.”

“Yeah, she trusts me now, for the most part,” he told them all. “She was concerned at first coming up here but we talked and she knows the growth I made and I’m utilizing my own separate funds that I have for this and she knows I’ve set aside money, my own allowance every month.”

Wahler has been very open in the past about his struggles with both alcohol and cocaine addiction. Following his time on the OG “Hills,” he founded a men’s sober living home, though admitted to relapses in 2018 and 2020. While nobody picked it up at the time, he actually opened up a little about losing the family home back in December 2020 on his blog.

“When alcohol came back into the picture I started doing it in isolation. I was not able to really function. While I was drinking and using, it spiraled into a gambling addiction as well,” he wrote. “During this period I was making lousy choices in company and business. I surrounded myself with bad company and was making bad business investments. It was a domino effect. I lost a lot of money and lost our house — within a year.”

During the episode, Jason and Ashley revealed the two also recently experienced a molar pregnancy, which is when a tumor develops in the uterus.

“I had my nine week ultrasound a few months ago and I sat down and he puts the little thing at me and he goes, ‘Do you see that?’ He’s like, ‘There’s no fetus,'” Stack recalled in an emotional confessional. “He says, ‘This is not a normal pregnancy, you have a molar pregnancy and we have to get it out right away because you could have cancer.'”

With Stack pregnant again with the couple’s second child, she explained that she was still “nervous something will be wrong” this time around. While Jason couldn’t accompany her into the doctor’s office, cameras were with him when he FaceTimed into an ultrasound appointment — where they got a look at the fetus for the first time.

Their baby is due any day now, with Stack revealing she was in her 35th week of pregnancy last week — and sharing a nude photo of her growing bump.